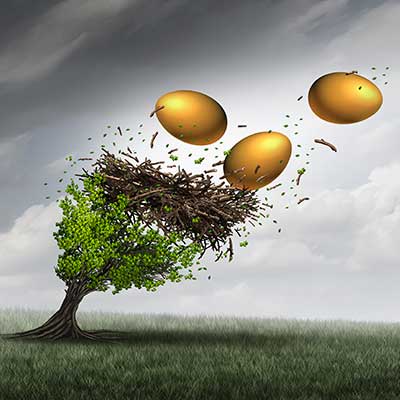 The Great Retirement Caper: The 401(k) Bait and Switch

The markets are at an all-time high, and you can already smell the suntan oil of that Caribbean island getaway, the first stop of your retirement tour! Then you start doing the math. You add up life’s daily costs against your life expectancy. You tally food, housing, healthcare, transportation and travel costs, and the nest egg suddenly seems a little light. You do some cellphone math and realize that you can’t afford to live to be “ripe” or “old.” Decades ago, you put your faith in a new “set it and forget it” magic growth plan with allocation mixes, matching contributions and tax savings that promised to deliver a secure retirement. So what happened?

For most Americans, a 401(k) account is an essential (if not only) part of their retirement strategy. But let’s not forget that these employer-sponsored savings plans were originally designed to supplement managed pensions that paid out a fixed amount upon retirement. As the costs of pensions soared, companies began to explore alternatives. The Revenue Act of 1978 featured provision “401(k)” under which “employees are not taxed on the portion of income they elect to receive as deferred compensation rather than as direct cash payments.”

It was what employers had been looking for. Workers could now pay into their own tax-deferred accounts, and employers could choose to match, not match or only match up to certain amounts. From 1979 to 1982, Hughes Aircraft, Johnson & Johnson, PepsiCo, Honeywell and FMC Corporation launched some of the first 401(k) plans.

So these new DIY accounts are the relative newcomers of the retirement realm, and their rapid adoption into the American psyche has been astounding. The 401(k) is now the most popular defined contribution plan in the country, with more than 87% of eligible employers participating, more than 50 million workers actively enrolled and more than $4.7 trillion in assets (Investopedia). And yet, we are in a full-blown retirement crisis. Average balances are well short of the funds needed to support comfortable retirements. An astonishing two-thirds of Americans with 401(k)s don’t contribute a single dime, and according to a recent Government Accountability Office (GAO) study, 29% of Americans over 55 have no retirement savings at all.

For baby boomers in particular, the 401(k) has been an abject failure. Many were wiped out by the financial crisis of 2007–2009 when some $2 trillion in assets were lost in just 15 months. Most of those born between 1946 and 1964 now report having only about a third of what they’ll need to live out their later years in relative comfort. The dramatic switch from retirement pensions to 401(k) plans must shoulder some of the blame.

For older workers, it was a seismic shift from a clear and predictable savings strategy—to a complex and volatile one.

As many baby boomers approach retirement, the most important question of their older years is no longer their golf handicap or cruise ship preference, but instead, “What are your 401(k) fees?” Most have no idea. From annual participant charges to plan fees, weighted fund expenses, investment adviser surcharges and administrative costs, the average worker loses well over $100,000 in 401(k) monies. Higher earners can kiss upwards of $500,000 goodbye.

The hard truth is that the 401(k) was never meant to carry the hopes and dreams of millions of Americans. It was never designed to be the main “go-to” pension plan of the masses, particularly in a world subject to volatile change and economic uncertainly. It was really just a little loophole in the tax code that an HR executive at Johnson & Johnson stumbled upon some 39 years ago that gave employers a way to offer you a savings plan and have you pay for it.