What Are Platinum and Palladium Used for?

Home » Headline Gold News » What Are Platinum and Palladium Used for? 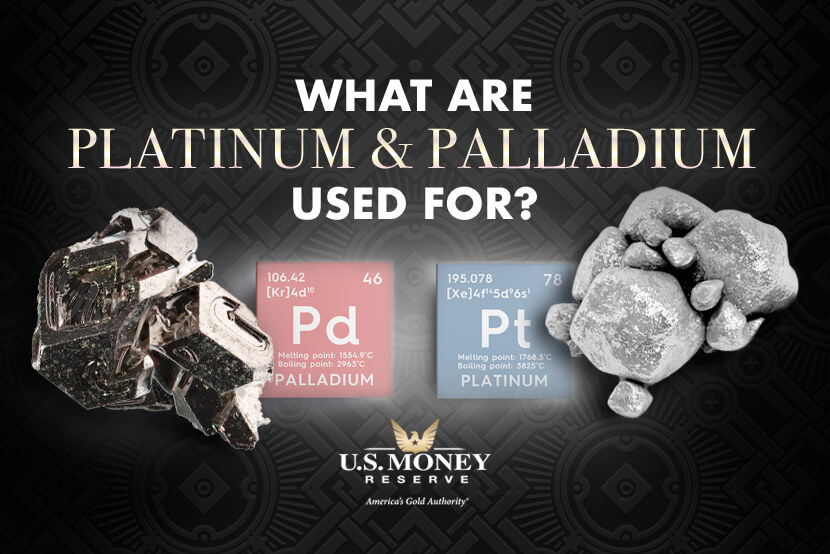 You might not realize it, but you’re surrounded by precious metals—in the car, at the dentist, even if you were to go to outer space. Learn about two of the lesser-recognized precious metals—platinum and palladium—and the many ways they’re used.

What Are Platinum and Palladium?

One of the rarest metals, platinum—which is silver-white in color—was once called “white gold.” Platinum is soft and pliable, and it’s resistant to corrosion and tarnishing. It’s mined mostly in Russia and South Africa, but also in Australia, Canada, the United States, and Zimbabwe.

What Is Platinum Used for?

Among precious metals, platinum is a utility player. You undoubtedly know that it’s commonly found in jewelry, but its usefulness goes well beyond wedding rings. Among the other places you might find platinum:

Another industry where platinum is prevalent is healthcare. Platinum compounds show up in anticancer drugs, and platinum alloys make their way into pacemakers and heart replacement valves.

People also hold platinum as an asset. According to Yahoo Finance, it’s “considered a strong symbol of value and quality.”

“The value of platinum correlates to the performance of the wider economy. If the economic and political conditions are stable, the industrial demand for platinum shoots up. So do its prices,” Yahoo Finance notes. “In times of poor economy, demand for vehicles, turbine engines, and heavy machinery declines. It causes platinum prices to fall.”

In mid-August 2020, the platinum price was around $960 per ounce—considerably lower than palladium and gold but much higher than silver.

What Is Palladium Used for?

Not unlike platinum, most palladium goes into making catalytic converters. An estimated 85% of palladium is used for these automotive parts. Palladium also is frequently found in jewelry, dental work, and electronics.

As with platinum, people buy palladium to hold as an asset. As of mid-August 2020, it actually was trading higher than platinum, gold, or silver. At that time, the gold price was around $2,000 an ounce, compared with almost $2,200 an ounce for palladium. The price of palladium has been rising because of a worldwide supply crunch.

“With growing demand thanks to its uses in cutting car emissions, palladium is enjoying a boom, with prices rising over 100% in three years,” the Mining Technology website reported in January 2020.

How Do Platinum and Palladium Compare with Gold and Silver?

While there are vast price differences, platinum and palladium do share some territory with gold and silver. All of them are found in jewelry and electronics.

But gold and silver are more broadly used. Gold shows up in surgical instruments, satellites, and specialized glass, while silver appears in dinnerware, solar panels, and antifreeze.

Learn more about platinum, palladium, and other precious metals with help from U.S. Money Reserve. Our free Precious Metals Report provides an in-depth look at how the four metals can be good for your portfolio. Download yours today.