How Much Silver Is in the World?

Home » Silver » How Much Silver Is in the World? 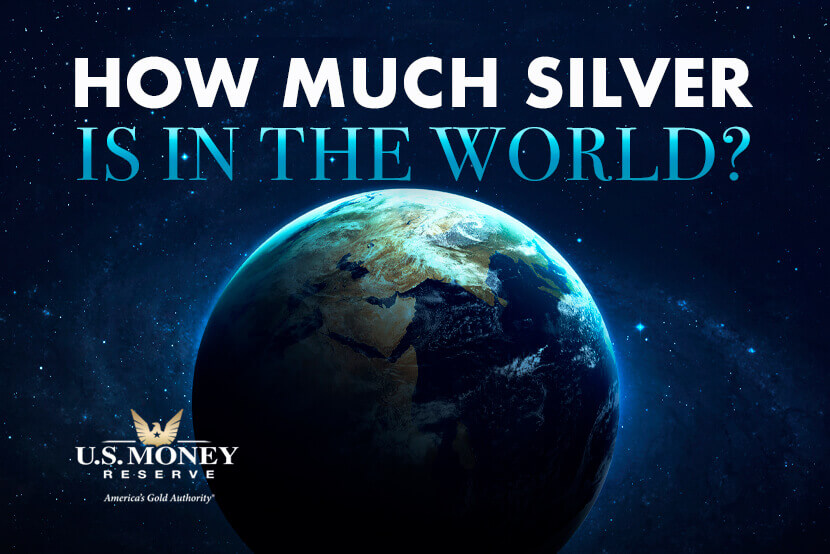 Gold is found on every continent on Earth except Antarctica. But silver? More than 55% of silver is found on just 4 of the 7 continents. So how much silver really is in the world?

How Much Silver Has Been Mined?

To date, 1.74 million metric tons of silver have been discovered around the world, according to the U.S. Geological Survey (USGS). The four countries producing the bulk of the world’s silver are Mexico, China, Peru, and Russia.

Global supply from silver mines fell by 1.3% in 2019, the Silver Institute reports. It was the fourth consecutive year of global supply declines.

How Much Demand Is There for Silver?

Global silver demand grew by 0.4% in 2019 versus 2018, despite the ongoing global trade war, the Silver Institute notes. Driving that demand was a 12% rise in the purchase of silver as an asset. Meanwhile, demand for silver in jewelry, silverware, photography, and industrial products slipped.

How Much Silver Is in the World Compared to Gold?

Where Can Silver Be Found?

In 2019, silver mines worldwide produced an estimated 27,000 metric tons of the precious metal, thanks in part to stepped-up production in Argentina, Australia, Mexico, and Poland, the USGS reports.

How Much Silver Is Produced in the U.S.?

According to the USGS, in 2019, U.S. mines produced about 980 metric tons of silver with an estimated value of $510 million. Silver was produced at four silver mines and as a byproduct from 33 other operations, including copper and gold mines. Alaska leads the country in silver production, followed by Nevada.

Among all countries, the U.S. ranks 10th for silver production.

How Much Silver Is Left in the World?

How Can I Buy Silver?

The most common way to buy silver is to purchase physical silver in the form of coins and bars. You also can get in on the silver rush by purchasing shares in silver ETFs and silver mining companies, though there could be some risks associated with buying precious metals ETFs.

Many experts suggest diversifying modern-day portfolios with physical precious metals, and particularly silver by as much as 10%. In early June 2020, the price of silver was hovering at around $18/oz.

As far as natural elements go, silver is among the only ones that can stand the test of time. That’s one reason silver has been continuously mined since early history. To learn more about how precious metals can fit into your portfolio, download our free special report “Precious Metals Report: 2019 Edition” on gold, silver, platinum, and palladium.