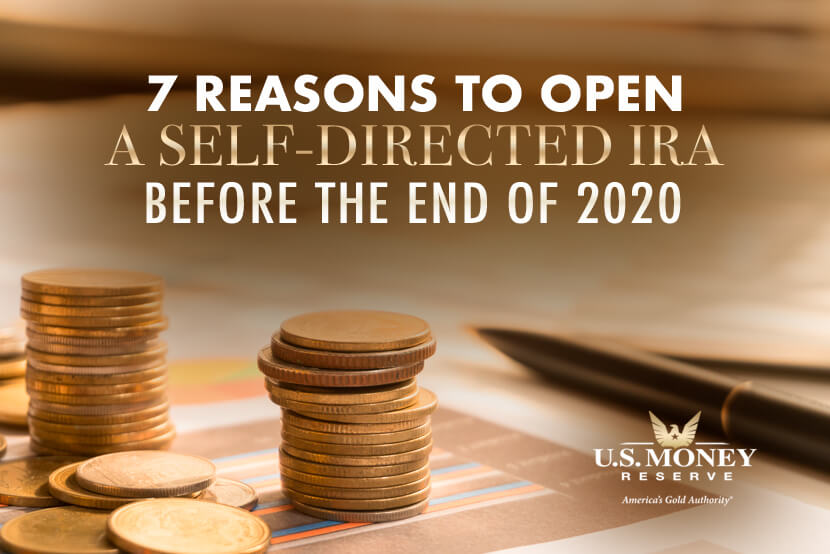 Saving money for retirement is always a good idea, but learn why right now is an especially good time to save in one particular way—with a Self-Directed IRA, which enables you to hold alternative assets like precious metals.

1. Get ahead of the next tax season.

A Self-Directed IRA, including one with gold and other precious metals, can offer tax advantages. Annual contributions to a Self-Directed IRA are tax-deductible, and asset growth is tax-deferred, just like with a traditional IRA.

By opening a Self-Directed IRA now, you can get a head start on tax planning that you might otherwise have put off until next year.

Plus, if you’re eligible for and choose to take part in the recently announced payroll tax deferral, you could use your additional income to fund a Self-Directed IRA. (Just keep in mind that the taxes will need to be paid back next year.) The payroll tax deferral allows eligible individuals to defer paying some of their federal payroll taxes (like Social Security) through the end of the year to allow for a little extra financial freedom and flexibility in 2020. Read more about the Payroll Tax Deferral Order.

2. Give yourself a gift.

It’s been a tough year. Don’t you deserve a gift for yourself?

“By far, the best investment you can make is in yourself,” Warren Buffett says.

Plus, “When we invest in ourselves, especially in a way where it helps us to advance, science shows that this is where we start to flourish and do well,” professor Kristen Lee of Northeastern University adds.

Rather than going on a shopping spree, why not go shopping for a Self-Directed IRA? The far-reaching benefits are likely to last longer than a new TV or leather recliner.

The U.S. economy is officially in a recession. The National Bureau of Economic Research announced it on June 8, 2020.

“This is a recession you could spot from outer space,” Scott Horsley commented on NPR. “We lost 22 million jobs in March and April. Just about every industry saw a spike in unemployment. And GDP, which shrank a little bit in the first quarter, is expected to fall off a cliff in the current quarter.”

But that news doesn’t mean the economy is spared from further damage, so you might want to consider reallocating at least some of your assets now. Reallocation could include buying gold, long viewed as a store of wealth, that you can stash in a Self-Directed IRA.

A smart asset holder always seeks ways to diversify their portfolio. Yet: “One in four Americans say they don’t know or have no opinion on whether their financial portfolio is diversified,” reports a survey performed by CNBC and Morning Consult.

Diversification enables you to smooth out the ups and downs in the performance of your assets. A Self-Directed IRA can be a vital component of a diversification strategy.

There’s no need to wait for your New Year’s resolutions to take a second look at your portfolio’s level of diversification.

5. Take action before the election.

On the heels of so much uncertainty is a presidential election. As Election Day draws closer, the markets might become jittery. Why? The markets don’t like uncertainty.

“Historically, volatility in the stock market is elevated in the months leading up to an election,” Forbes confirms. There’s also increased uncertainty if a newcomer is elected.

“A new president can create more unknowns: The potential for increased regulations, higher taxes, and other shifts the market perceives as anti-business can all influence sentiment,” Forbes continues.

So why not open a self-directed IRA—perhaps stocked with gold, silver, platinum, or palladium in the form of bullion, bars, or coins—before potential election-sparked volatility sets in?

6. Lock in the current price of gold.

Gold has been on a ride lately. In early September, the price of gold has hovered around $1,940/oz. You never know when the price might climb even higher, though. Therefore, now might be a good time to seize on what could be a relatively low price for gold, which you can then put in a Self-Directed IRA.

7. Align your assets with your passion.

Perhaps you watched a documentary that piqued your interest in gold. Maybe you’ve always been fascinated with this alternative asset. Or you might have recently road-tripped to a historic gold mine in one of America’s many gold-rich states like Arizona, Arkansas, or Colorado. Now that you have some stay-at-home time on your hands, you could turn this new interest into a deposit of gold in a Self-Directed IRA.

If not now, when?

Best-selling author and entrepreneur Richie Norton once said, “I did hundreds of interviews with people in retirement or approaching retirement. Here was their theme: ‘I was waiting for a time when I’d have more time, education, experience, or money to do what I wanted to do…only to find out when I got there that I still needed more time, more education, more experience, and more money.’”