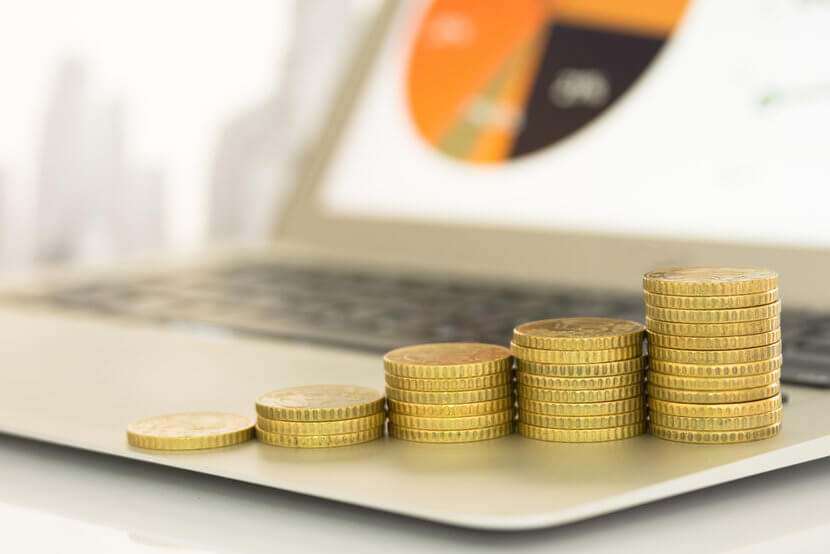 How Gold Coins Could Enhance Your Portfolio Performance, According to the World Gold Council

Amidst negative interest rates and a general sense of national and international unrest, the demand for gold has been climbing. Wealth has steadily moved out of traditional assets, like stocks and bonds, and into gold. Hedge funds, central banks, and everyday citizens alike have flocked to this precious metal. With the price of gold clearing past the $1,300 barrier and steadily rising, gold is set to be one of the most prized assets of 2016. As many veteran gold buyers know, though, it has been for centuries. Find out why industry experts at the World Gold Council (WGC) believe that gold is an important addition to your portfolio, now more than ever, and how gold coins could increase your portfolio's potential for wealth.

By acting as a strong diversification tool

“Diversification is rule number one” when it comes to protecting and growing your wealth, says Clem Chambers of the Forbes Investor Team. Simply put, don't put all of your eggs in one basket. Why? Because as some holdings fall in value, others maintain their value–or even rise–helping to negate the effects of the fall. While allocating a portion of your wealth into a variety of stocks is a means of diversification, gold is an alternative holding that transcends the economic cycle that traditional assets are historically tied to. Take, for example, how gold performs in relationship to the price of a conventional stock, as calculated in the following example.

“Gold tends not to move in the same direction as U.S. stock prices, which means it provides a cushion…during times of stock market corrections,” says Henry To, partner at CB Capital in Newport Beach, California. According to To's calculations, “Over the last 45 years, U.S. stock prices were in downtrends or corrections during 10 of those years, or about 22 percent of the time. During that time, gold outperformed the S&P 500 by 45 percent on an annualized basis.”

While no one can point to a single price driver behind gold, the drivers (like gold supply and demand) do tend to be different than those of more traditional assets. Because of this, gold has shown to be incredibly efficient at diversifying a portfolio and thereby reducing its risk and volatility. One could even argue that gold isn't just “another egg in your basket.” It's a new basket entirely.

By outperforming other liquid assets during crisis

Gold's hardiness in the face of economic crises is likely one of its best known characteristics. In the June 2016 issue of Gold Investor, the WGC compared gold's performance to that of other assets—like Japanese government bonds, German Bunds, UK Gilts, and U.S. Treasuries—during periods of economic turmoil like Black Monday, September 11, and various U.S. recessions and sovereign debt crises. Their findings illustrate how well gold can perform against other liquid assets during tumultuous times. 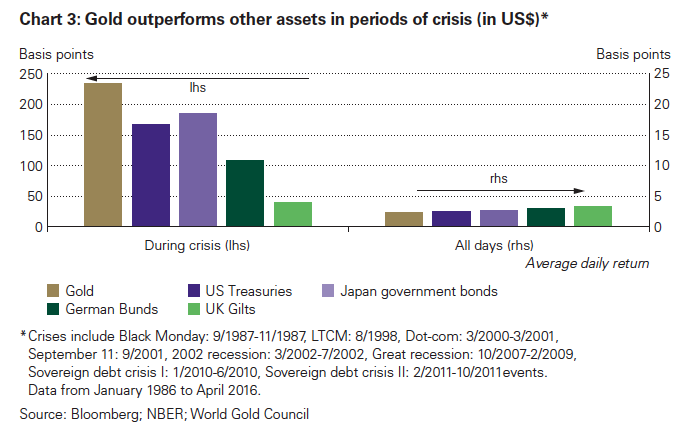 As the WGC notes, wealth holders tend to draw back from equities during financially tense times. As they do so, “gold's correlation to stocks becomes progressively more negative and its price tends to increase.” As easy as they are to buy and sell, gold coins are the definition of a “highly liquid asset,” making them advantageous to hold during periods of market stress.

The Gold American Eagle Coin is an international standard of trade. It's recognized by financial markets worldwide as a tangible form of wealth in an unpredictable economy. Call 1-844-307-1589 to learn more about the short-term financial protection that such a liquid asset could provide.

Gold has far outperformed all major currencies as a means of exchange over the past century, reports the WGC, and it has remained a pillar for wealth holders looking to protect their assets during times of extreme economic inflation.
Gold's returns have not only been positive over various periods of time—they've surpassed inflation and short-term bonds. For example, the WGC estimates that since April 2016 the average return on gold exceeded that of 3-month government bond returns by 7.87%.

While increasing cash reserves and reducing exposure to volatile financial markets makes sense, “holding onto cash will not make you wealthy,” says John Mauldin of Mauldin Economics. The supply of gold changes little over time (only about 2% per year) while fiat currency, like cash, can be printed in unlimited quantities. If a central bank chooses to print more money, a currency can be devalued overnight. Gold maintains its purchasing power over long periods of time and is more efficient than cash at storing wealth. Money in the bank “earns virtually nothing,” reports CNN Money, and “when inflation is factored in, that cash actually loses value.”

“Adding gold to a portfolio can enhance risk-adjusted returns,” reports the WGC

When it comes to determining how much gold you should hold within your portfolio, there's no wrong answer. The greater the risk within your portfolio, the greater the allocation of gold you may need to offset that risk. The final allocation is ultimately up to you, your financial goals, and your comfort and familiarity with high-quality, highly liquid assets. “Ultimately, it's not a matter of wanting exposure to gold,” says Jim Cramer of CNBC's Mad Money, “you need it.”

Gold coins remain one of the easiest ways to begin diversifying your portfolio and safeguarding your wealth. They're physically small and easy to buy, store, and sell. Call 1-844-307-1589 to speak with an Account Executive today. Whether you're an experienced gold coin buyer or just beginning your journey with gold, your Account Executive can provide you with a one-on-one consultation to help you better safeguard your wealth today!