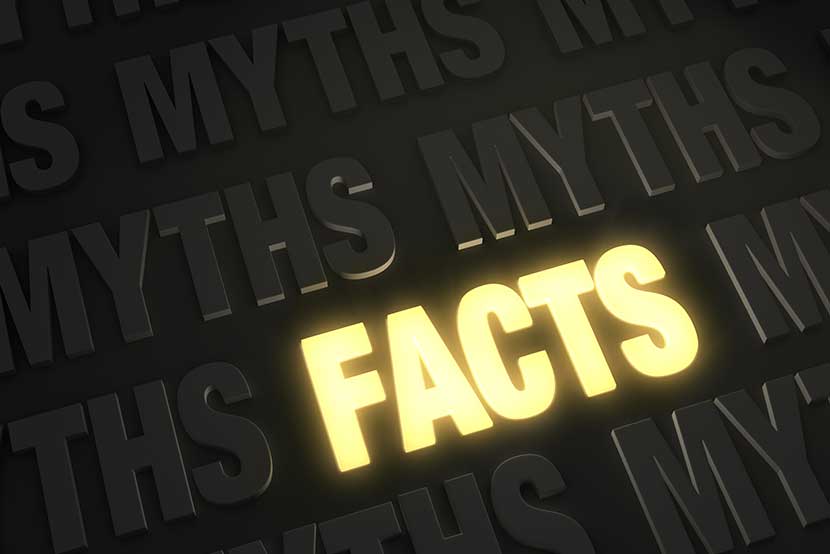 I recently ran across an article entitled “The 12 Biggest Mistakes the Media Make When Covering Gold Markets,” by Gary Alexander. It’s a good article for potential gold buyers because it debunks many of the myths that lead investors, and their financial advisors, to exclude gold from their portfolios.

For the most part, Alexander’s assessment is solid. His point of departure is a column in the New York Times entitled “Lust for Gold” by the Noble laureate Paul Krugman. I think very highly of Professor Krugman, which makes me an outlier in the gold community but, like Alexander, I think he’s wrong about gold.

The media myths that Alexander identifies are important because they mislead many mainstream investors about the merits of holding gold. Over the next several months I’m going to address these myths, add my own perspective, and explain where Alexander sometimes misses the mark.

Myth #1: Gold is not a safe investment

You won’t see these graphs because they demonstrate a truth inconvenient for gold’s critics: Like all other asset classes, gold performs well in some periods and poorly in others. You can arbitrarily choose any period of time and make any investment look excellent or terrible, as you wish. Gold critics like Krugman fail to make an honest case against gold by being selective in choosing their dates in order to dismiss gold as a poor investment.

Here’s another crucial point that Krugman and other gold-skeptics overlook: The performance of any asset cannot be rightly assessed without understanding its role in an investor’s portfolio. Elsewhere, I’ve argued that the proper role for gold in a portfolio is as wealth insurance. Gold protects your wealth in periods of economic and political turmoil, when the value of other assets is crashing—like in 2008 and 2009.

When you understand gold as insurance, the fact that it sometimes underperforms other assets is irrelevant. Gold’s core value proposition is protection, not appreciation. But unlike other forms of insurance, gold never loses its entire value. When you decide to cash it in, you know it will have held a significant portion of what you paid for it, unlike other forms of insurance such as term life, auto, or home insurance.

And gold is insurance with a bonus. Your term life, auto, and home insurance will never increase in value. Gold, on the other hand, has a 40-year track record over most of which it has held its value or appreciated.

Krugman laments the “recent rise in goldbuggism” in his NYT article. He has a point.

Most gold investors buy gold for wealth protection or appreciation potential, without buying into the political baggage associated with gold bugs. But in recent years the media’s focus has been on the political aspects of gold: demands for a return to the gold standard and the imminent threat of hyperinflation and government bankruptcy. The heated political rhetoric around gold distracts and confuses many potential gold buyers.

I think the politics of gold also accounts for why some economists, like Krugman, have a blind spot for the metal. Many of them are Keynesian economists of one flavor or another. John Maynard Keynes was one of the most influential economists of the 20th century and is said to have dismissed gold as “a barbarous relic.” (Actually, Keynes said the gold standard, not gold, was a barbarous relic.)

Typically, these economists, liberals for the most part, believe the gold standard limited economic growth and contributed to the Great Depression. In short, they think conservative economists and politicians who advocate going back on the gold standard as, well, neanderthals. On the other hand, those who favor the gold standard believe the excesses of Franklin Roosevelt’s New Deal and Lyndon Johnson’s Great Society are made possible by Keynesian deficit spending. This conflict lies at the heart of our bitterly divided politics today.

Gold, itself—the physical metal—is caught in the crossfire. All this controversy tarnishes gold as an investment alternative for many mainstream investors. Political liberals, in particular, confuse the merits of investing in gold with their fierce opposition to a return to the gold standard.

For most of us, the reason to include gold in our portfolios has nothing to do with this fight. It simply comes down to holding gold as wealth insurance, a role gold has played for thousands of years. The “barbarous relics” are war, political upheaval, and economic catastrophe, not gold. Gold is our protection against the personal financial harm that comes with these hard times.

Myth #3: Gold has no intrinsic value

If you look up “intrinsic” in Merriam-Webster you’ll see there’s nothing supporting this myth. If gold has no intrinsic value, the paper currency and base-metal coins that make commerce possible certainly don’t either. What about the quadrillions of electrons coursing through the world’s economy every day enabling trillions of dollars of commerce? Do electrons have intrinsic value? If so, it’s negative.

What makes commerce possible is trust and confidence. Today, the dollar is the most trusted currency in the world. It is trusted because people around the globe have confidence in the strength of the U.S. economy and our commitment to back the dollar with our national wealth. Two hundred years ago, no one trusted the dollar. That’s a primary reason we have a Constitution today and a powerful Treasury Department.

So, the intrinsic value of the dollar is a very recent development in history. Gold, on the other hand, has inspired the trust and confidence of people, cultures, and governments for thousands of years. In the end, intrinsic value, like beauty, is in the eye of the beholder, and gold has stood the test of time like no other asset or currency.

I will address other media myths about gold, and what they mean for mainstream investors, in future posts.