Do a Double Take: What’s a Double Eagle Coin? 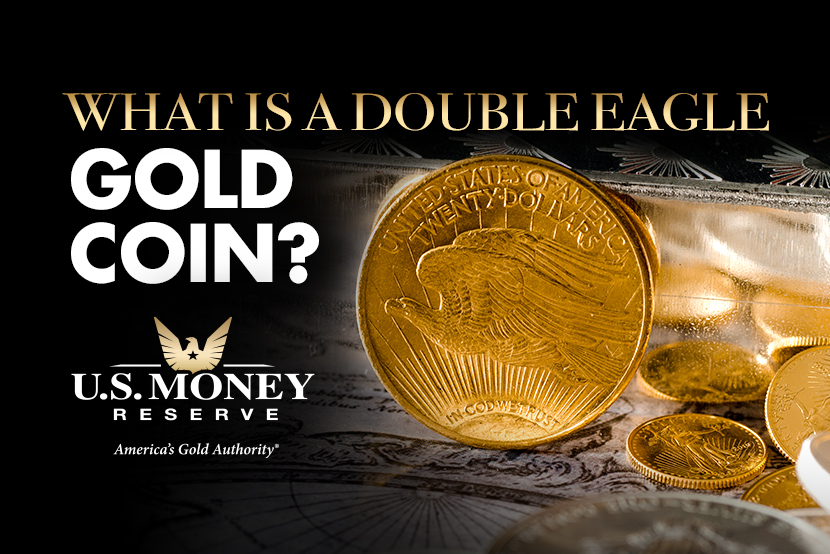 You'll recognize Lady Liberty on the front of this coin; the reverse side depicts the flight of an eagle. It’s one of the most iconic U.S. coins ever minted, yet it’s highly doubtful that you’ve got a Double Eagle Gold Coin in your pocket. You might want one after reading this, though!

Learn about the history of the Double Eagle Gold Coin, why it might be an attractive asset for you, and how to bring home this inescapably exquisite coin.

In 1905, President Theodore Roosevelt wanted to change the design of American coins, most notably gold pieces. “He thought the coins of that era were unattractive,” according to the United States Mint, “and wanted them to instead embody our national identity and growing pre-eminence on the world stage.”

Roosevelt selected American sculptor and artist Augustus Saint-Gaudens for this bold makeover. Saint-Gaudens’ work resulted in the 1907 $20 gold piece, also known as the Double Eagle. The coin got that name because its face value was twice that of the $10 coin that also was inscribed with an eagle, according to The Washington Post.

The Mint praises the 1907 Double Eagle Gold Coin as the most beautiful coin ever minted in the U.S. and perhaps in the world, going so far as to elevate it to the status of the “definitive American coin.”

The front of the Saint-Gaudens coin shows a statuesque Lady Liberty. The robe-clad woman holds a torch in her right hand and an olive branch in her left hand. The dome of the U.S. Capitol appears in the background.

“This design underscores that liberty is central to the American spirit, is beautiful and attractive to all, and wherever Liberty goes, inspired by enlightenment, peace follows,” the Mint says.

A young eagle taking flight at sunrise shows up on the back of the coin, while the motto “E Pluribus Unum” accentuates the edge.

The Mint says four variations of the 1907 Double Eagle were made:

In March 1933, in an effort to help the U.S. economy recover from the Great Depression, President Franklin Delano Roosevelt required that people turn in their gold coins and bullion in exchange for paper dollars. This effectively took the U.S. off the gold standard. Following Roosevelt's proclamation, 445,500 Double Eagles bearing 1933 dates and struck at the Philadelphia Mint were subsequently melted down into gold bars.

No 1933 $20 Double Eagles ever were made available to the public as legal tender. Just two of the coins were preserved and sent to the Smithsonian Institution.

However, as it turns out, 20 Double Eagles were stolen from the Mint in Philadelphia and wound up in the hands of various people. The federal government says it has recovered all of them:

Today, a single 1933 Double Eagle is estimated to be worth about $10 million. That’s not surprising, given that fewer than two dozen of the coins are known to exist.

In January 2009, the Mint issued the 24-karat 2009 Ultra High Relief Double Eagle Gold Coin, paying homage to the Saint-Gaudens original. The Mint produced the first of these coins in 2009 at its facility in West Point, New York.

Modern technology enabled the Mint to digitally map the coin’s original plasters. Added to the 2009 coin were another four stars to represent the 50 states, and the inscription “In God We Trust,” which did not appear on the 1907 version.

The Mint also included a small border to give the $20 coin a more consistent edge. The 2009 coin was made of 24-karat gold to ensure a top-quality ultra high relief.

“The coin is a uniquely American artistic expression—created by an American sculptor and crafted by an iconic American institution,” the Mint says of the 2009 version. “We have perfected what has been called one of the most beautiful coins in the world, but, like America itself, there is much more on the horizon.”

Now that you know the history of the Double Eagle, you might be wondering why you’d want to buy one of the 2009 coins. Here are four great reasons.

You can own the remarkable Ultra High Relief Double Eagle Gold Coin today by contacting U.S. Money Reserve at 1-844-307-1589.