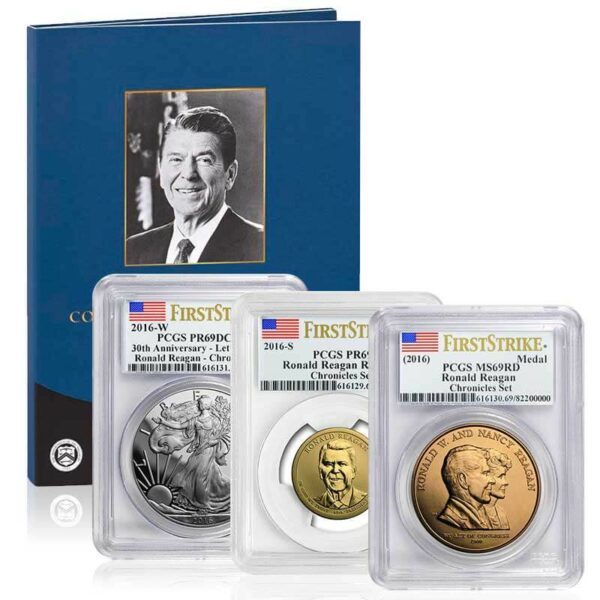 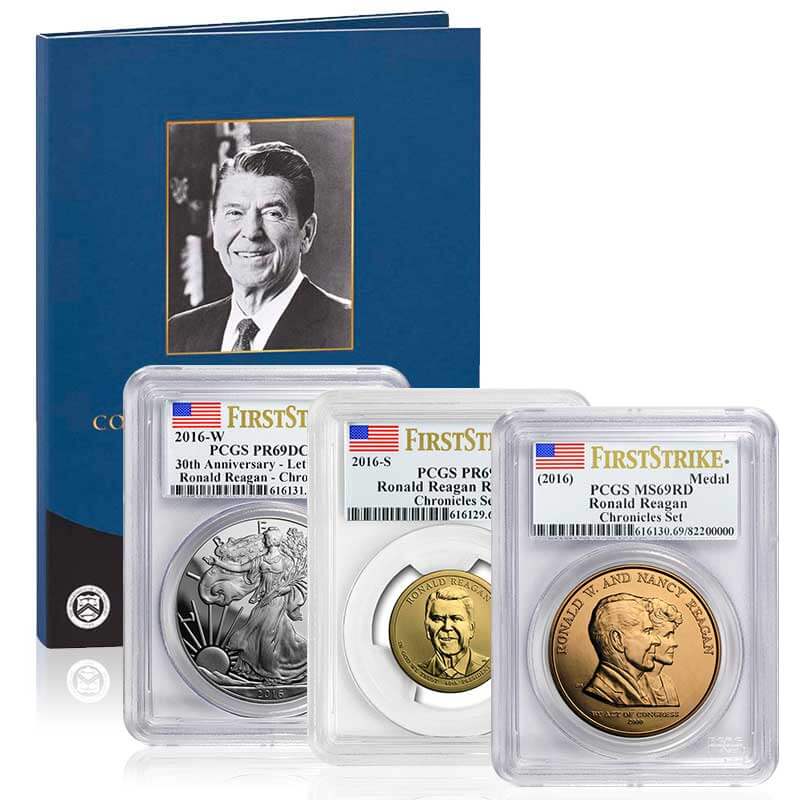 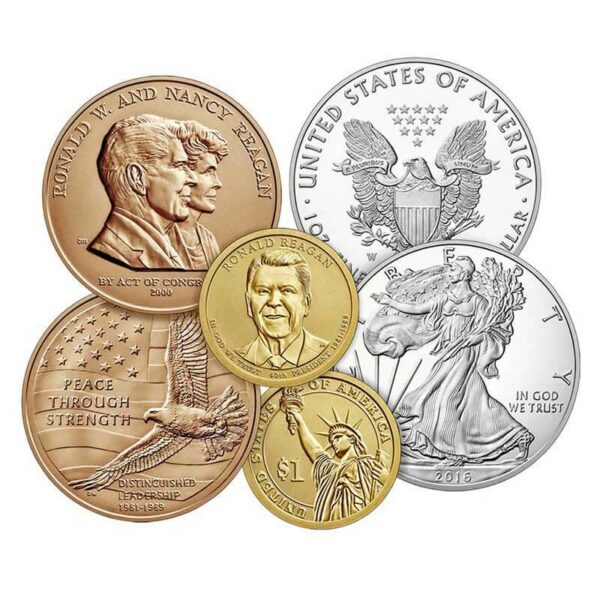 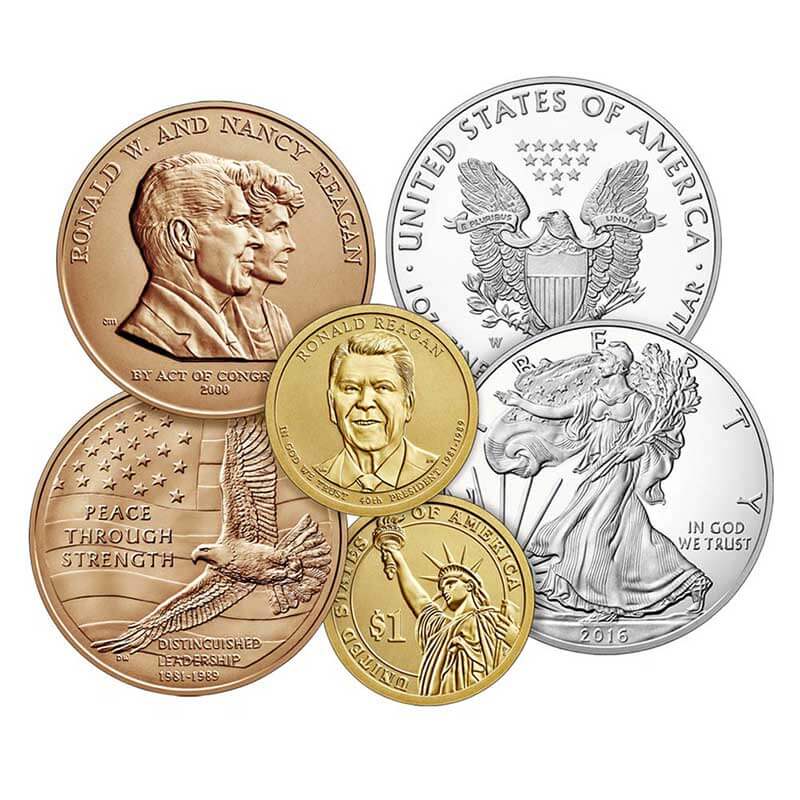 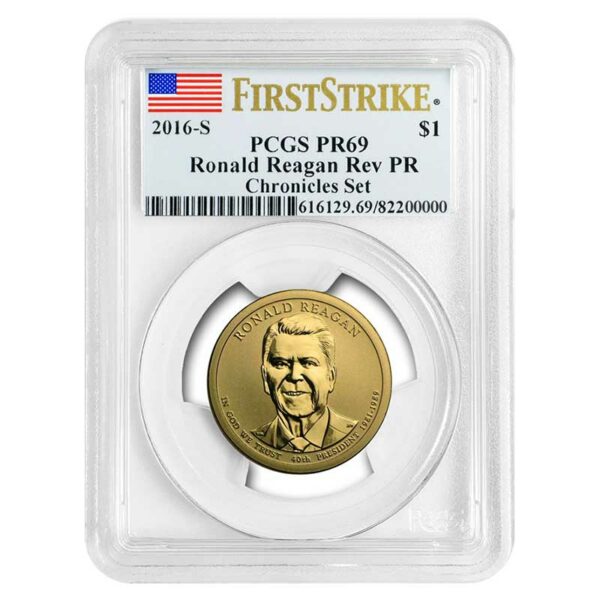 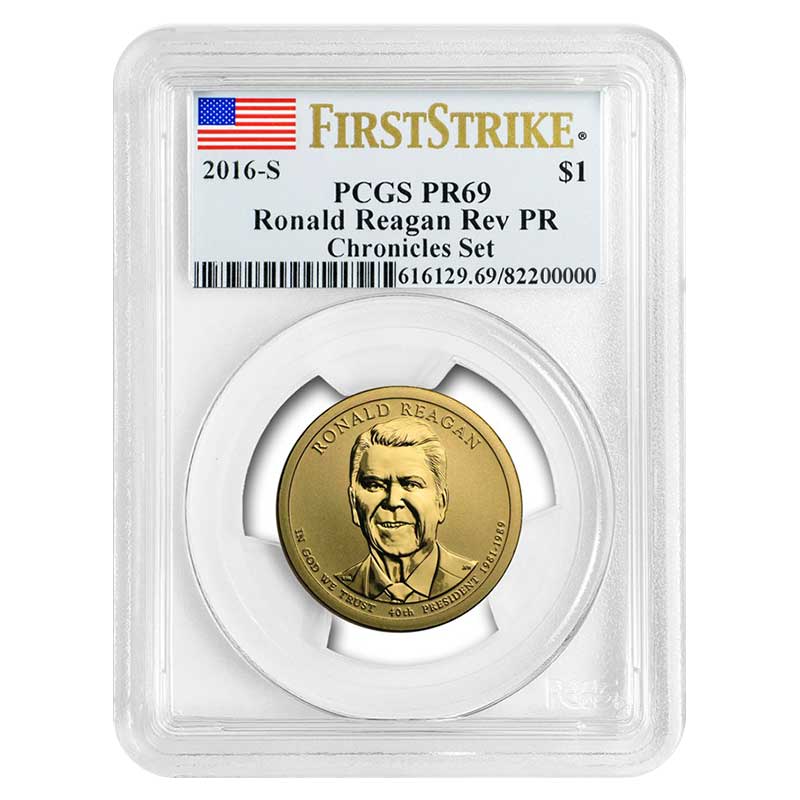 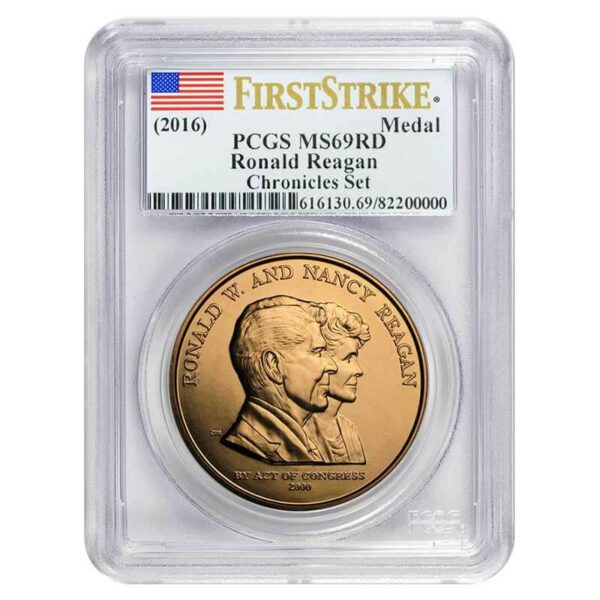 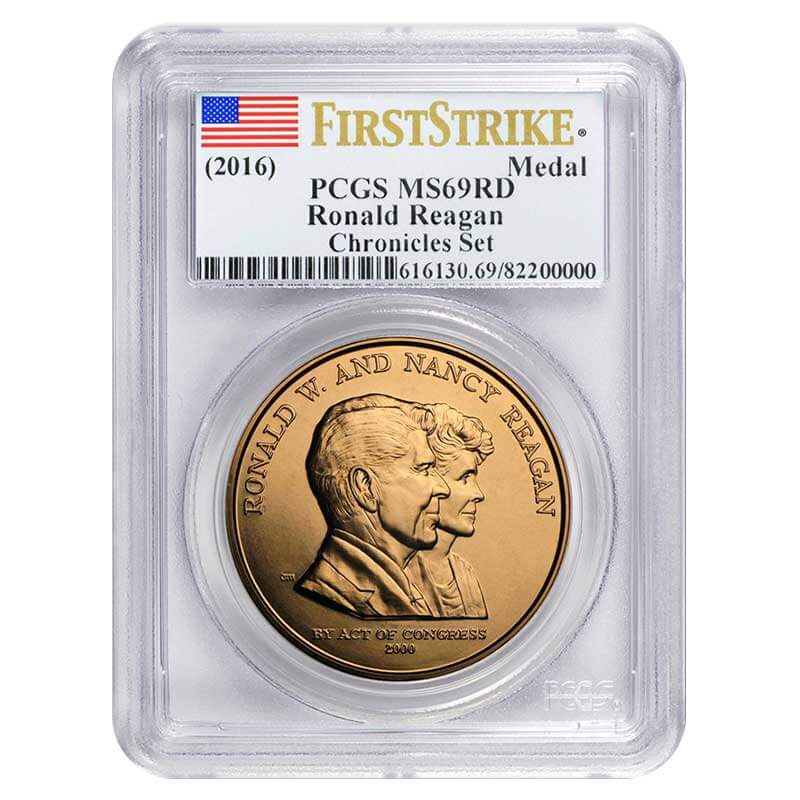 The 2016 Ronald Reagan Coin & Chronicles Set perfectly captures the spirit of Ronald Reagan and his lasting legacy as one of the most celebrated presidents in U.S. history. This three-coin set is the last in this celebrated series from the U.S. Mint and includes three incredible coins: 2016 1 oz. Proof Silver American Eagle, 2016 Reverse Proof Reagan Presidential Dollar and Ronald and Nancy Reagan Bronze Medal. Each set comes with a rich booklet containing information and images from Reagan’s impressive life.

Courtesy of the U.S. Mint, the coins in the 2016 Ronald Reagan Coin & Chronicles Set represent some of the finest coin craftsmanship available. The set includes:

Buyers of Silver Eagle coins gain a long-standing and practical form of tangible wealth. That’s in addition to a practical means of entry to the world of precious metals, and the kind of liquidity that makes these sought-after silver coins easy to buy and sell.

The Silver American Eagle is made of 1 oz. of 99.9% pure silver. The 2016 set marks the first time the Coin & Chronicles series includes a Proof Silver American Eagle. This is done, in part, to acknowledge Reagan’s celebrated presidency and help commemorate his role in revitalizing the nation’s Silver American Eagle coin program in 1986. To mark this occasion, this 2016-dated coin features special incused edge lettering of "30th Anniversary.”

But the Silver Eagle is only one piece of this extraordinary set. It features two additional coins: a Ronald Reagan commemorative coin (How many coin buyers can boast that they have reverse proof presidential dollars in their collection?) and the Bronze Congressional Medal. All are in exquisite condition, and each one marks in its own way the life and public service of President Ronald Reagan.

Each coin carries 69 grade by PCGS, the Professional Coin Grading Service. PCGS is one of the most respected names in third-party coin certification. By their grading scale, 69 coins are "virtually fully struck" and only have minuscule imperfections when closely inspected.

The American Numismatic Association is another respected grading company. For more insight, their official definition of PR-69 describes such coins as having “a very attractive sharp strike and surface” and rates their visual appeal as “exceptional.” (The highest available PR grade is 70.)

In addition to their 69 grade, each coin in the Reagan Chronicles Set is certified by PCGS with a coveted “First Strike” label. That label is only awarded to coins issued in the first 30 days of the mint’s release for that year.

As one of modern history’s most popular presidents—if not the most popular—there’s no better candidate for a Coin & Chronicles Set than President Ronald Reagan. What better way to applaud his service to the country and his role in modern numismatics?

After all, it was Reagan who, in 1985, signed an amendment in the Liberty Coin Act that authorized the U.S. Mint to mint and issue one-dollar silver bullion coins. That led to the production of Silver American Eagle Coins such as the one included here.

But the coin that perhaps captures best what Reagan represented is the Ronald and Nancy Reagan 1 1/2 inch Bronze Congressional Medal. Their relationship, including a marriage that spanned more than half a century, was once called “the greatest love affair in the history of the American Presidency.” Some believe that Ronald and Nancy's strong partnership helped Americans see their way through the financially troubling 1970s to a more prosperous time.

As the 40th president of the United States, Reagan is remembered as a courageous champion by the American people. Authorizing the return of gold ownership back into the hands of the American people with the first U.S. gold coin in over 50 years, Reagan transformed financial freedom for Americans everywhere. Volumes have been written about him—and more volumes are sure to follow. But the thoughtfully compiled and well-produced booklet featured in this Coin & Chronicles Set effectively captures the spirit of Reagan: the man and the leader.

Design of the Coins in the 2016 Ronald Reagan Set

The artwork that graces each side of the three coins in the 2016 Ronald Reagan Coin & Chronicles Set offers your portfolio half a dozen masterful images any coin enthusiast would appreciate.

On the obverse of the Silver American Eagle Coin is Adolph A. Weinman’s “Walking Liberty,” proudly walking alongside a brightly shining sun. On the reverse is a soaring Heraldic Bald Eagle, clutching an olive branch and arrows.

The 2016 Reverse Proof Reagan Presidential $1 coin features a strong and clear portrait of Reagan, listed with the years of his presidency (1981-1989) on the obverse and a grand representation of the Statue of Liberty, torch held aloft, on the reverse.

The obverse of the Ronald and Nancy Reagan 1 1/2 inch Bronze Congressional Medal features the couple beside one another—as they were for so many years—in a clear and bold profile. On the reverse: a majestic eagle taking flight against a backdrop of the American flag.

How Much Does the 2016 Ronald Reagan Coin Set Cost?

The 2016 Ronald Reagan Coin & Chronicles Set is unique in that it includes multiple types of coins and precious metals, plus a thoughtfully researched booklet containing images and information from Reagan's impressive life. The combination of these factors makes this selection almost priceless. Call U.S. Money Reserve for live pricing on the 2016 Ronald Reagan Coin Set. Account Executives are standing by to answer any questions you may have about certified coin prices, individual gold coins, and product availability.

Where Can I Buy Ronald Reagan Commemorative Coins?

This Ronald Reagan Coin & Chronicles set isn’t available in stores. If you wish to own this distinctive collection representing the Reagan presidential era, turn to U.S. Money Reserve. We specialize in educating clients not only on the precious metals industry but also on how the precious metals landscape has changed throughout American history. Each of our Account Executives brings professional experience to precious metals ownership, and each one aims to build a meaningful, long-lasting relationship with every client. Call today to learn more about certified coins and First Strike coins, and to experience the U.S. Money Reserve difference.