Why Is Quantitative Easing Back on the Menu? 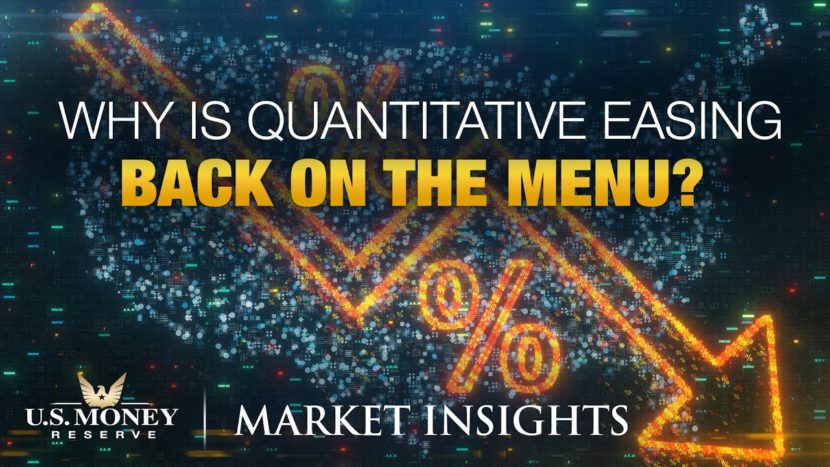 The Federal Reserve cut interest rates and spent $4.5 trillion in “quantitative easing” during the aftermath of the 2008 financial crisis. Now that interest rates are already low, Fed Chairman Jerome Powell has warned that during the next financial crisis, the Federal Reserve might have to rely even more heavily on quantitative easing. Experts believe this practice could have the potential to turbo-charge the price of gold. Learn more in this episode of USMR Market Insights with Coy Wells.

Is Quantitative Easing Back on the Menu? – Video Transcription

Coy Wells:           (00:00)
On a semi-annual basis, the Federal Reserve chairman must appear before both houses of Congress to testify about the economy and monetary policy. In the most recent testimony, chairman Jerome Powell warned that the Fed currently had limited tools to fight a recession. Because of this, the Fed would have to rely heavily on quantitative easing if another recession were to arrive. According to Investopedia, quantitative easing is when central banks purchase treasuries or other securities to inject money into the economy. After the 2008 financial crisis, central banks around the world have used quantitative easing extensively. The Federal Reserve in particular has engaged in multiple rounds of quantitative easing, each time buying billions of dollars in treasury notes and securities. By the time the final round of quantitative easing ended in 2014, the Fed had purchased 4.5 trillion dollars in assets. Another tool that has been used by the Fed to fight recessions in the past is cutting interest rates.

Coy Wells:           (00:59)
According to Powell, the current state of low interest rates does not give them much to cut, limiting the effect they can have. This would leave the Fed even more reliant on quantitative easing should another recession arise. Many market analysts believe gold has been boosted by the effects of quantitative easing in the past. The idea goes like this: quantitative easing tends to put pressure on the dollar and boost inflation. Many experts see gold as a hedge against inflation. Market Watch reported that Powell's comments about possibly relying on quantitative easing boosted the price of gold futures. For more information about quantitative easing and other major stimulus policies, please call the number on your screen for U.S. Money Reserve's latest special report, The Big Easing: Are Global Stimulus Policies Burning Out. This free report delves into the facts about how the global economy is showing signs of slowing down. So click on the link below for a free download and please give us your thoughts in the comments below and share this video. Make sure you subscribe to our YouTube channel so you don't miss a single new episode of Market Insights. I'm U.S. Money Reserve's Coy Wells, and thank you for watching.