Why is Debt the Elephant in the Room? 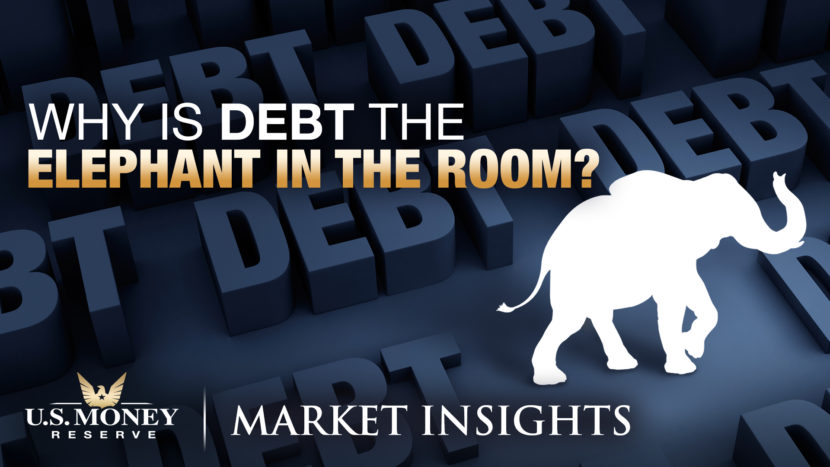 The Federal Reserve’s recent financial stability report found massive debts owed by U.S. Businesses to be a “top vulnerability” to the economy. The potential danger of debt goes beyond business; the U.S. government ran a 134 billion deficit in October alone.

Why is Debt the Elephant in the Room? – Video Transcription

Federal Reserve Chairman Jerome Powell met with President Trump on November 18th. During their meeting, they discussed a variety of aspects about the economy. After the meeting, President Trump took to Twitter and the topics discussed include interest rates, negative interest, low inflation, easing, dollar strength and its effect on manufacturing trade with China, European Union, and others. A notable absence from the list is the potential threat posed by debt. This is especially true given the statement from the Federal Reserve themselves.

In their latest financial stability report, the Federal Reserve called historically high debt owed by U.S. businesses, one of the top vulnerabilities facing the U.S. economy. The report explains that borrowing by companies that are not in the financial sector has led to high rates of indebtedness. The Fed stated this behavior merits heightened vigilance. The report specifically makes note of leverage loans or loans to companies that already have high debt or a poor credit history. The report goes on to state that this was a $1.1 Trillion market and growing. It's not just business debt that could have an impact on the economy. The difference between a government spending and its revenue growth is called the budget gap. The U.S. budget gap grew 34% in October after running $134 billion deficit according to the Treasury Department. For the fiscal year of 2019, which ended in September, debt was just under $1 trillion. The additional deficit pushes the 12-month deficit past 1 trillion. The last time this happened was in February of 2013. According to the Wall Street Journal, the continued rise in the number of retirees will demand more federal spending on Social Security and Medicare, further increasing the country's deficit in the coming years. As any entity's debt grows, so does the risk of default.

If you'd like to get more information on this topic, you can pick up U.S. Money Reserve's, special report: In Debt and Out of Time. The report talks about the global crisis, how it can affect you in the long term and give you solutions on how to prepare for what could take place. So please click on the link now or call the number on your screen to get your copy. If you're watching us from YouTube, please subscribe to our channel so you don't miss a single episode. I'm U.S. Money Reserve's Coy Wells and thank you for watching Market Insights.