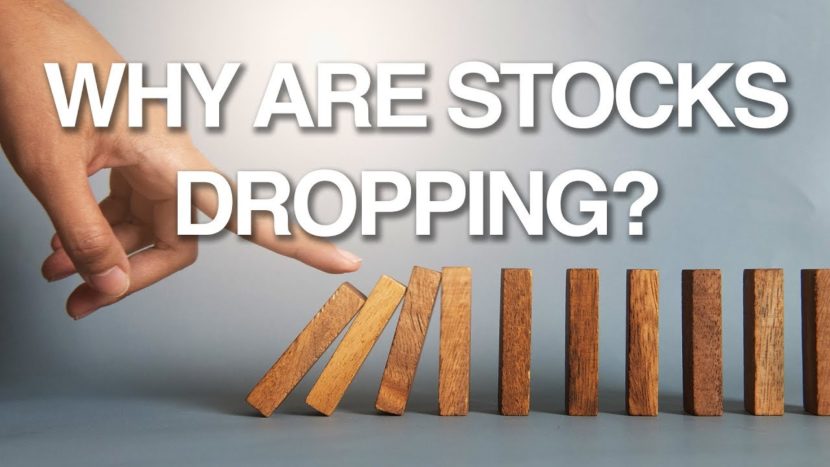 Last week the stock market plunged to its worst week since March on trade war and interest rate fears, prompting many to turn to the safety of precious metals. With Wall Street stumbling to regain its footing after logging another loss on Monday, many fear the worst is yet to come.

If you're watching the news today, you're now watching the stock market fall nearly 1400 points. And today we are here with Mr. Patrick Brunson and we're going to talk about some of the triggers that we've been talking about for the past couple of months and some of the items that you as a consumer need to be paying attention to. As many of you know, under the Obama administration, Janet Yellen was head of the Federal Reserve. And in the Federal Reserve for about eight years, the interest rates in the United States were moved very minimally, if not- none at all. And we're going to talk about Donald Trump criticizing Jerome Powell, the new head of the Federal Reserve, as he was talking about interest rates and how that is obviously affecting the market today. And we're going to talk to Mr. Brunson today about his thoughts on why it is affecting the market.

Well in regards to interest rates, this is kind of a touchy subject. A lot of people are criticizing Jerome Powell about raising interest rates during a period of where we're at in our economic cycle. But the fact of the matter is, whenever we raise interest rates, it makes borrowed money much more expensive. And if you look at the total amount of capital that's actually in the stock market right now, it's estimated that almost 80% of the money is borrowed money,

80%. What is your opinion with the interest rates continuing to rise, obviously that would stagger the economy long term. What would be the effects of the housing market as well?

Well, there's a lot to say there because as interest rates go up, so do mortgages. And so, there's a lot of retirees that are choosing to rent more or move into senior living facilities than actually buy and own a home nowadays. So there's some big ‘ifs' there as well. But here's the biggest thing when it comes to interest rates: lowering interest rates is one of the main tools that the Federal Reserve has to use to their disposal whenever we go into a recession. The problem is, is we've had interest rates near zero for such a long period of time now that it's almost like the Fed has to raise interest rates regardless of the economic situation. That way they can put that tool back in their toolbox of lowering interest rates once we finally do go into this next recession.

Right. So from what I understand, and I think both of us have a pretty good understanding of the economy here in the United States. With what you're saying and what we believe, essentially what we're saying here is that we're building up the interest rates here in the United States. And that is in essence a preparation for the U.S. economy for a recession that most likely is going to happen down the road to kind of help safeguard us. One of the other items that has been discussed in the past and is being discussed currently again, is cryptocurrencies and how cryptocurrencies was one of those items that has done very well in the beginning when it took off around the world. There were multiple cryptocurrencies that came out that were underneath that kind of brick layers underneath that. They were also supposed to help support or safeguard against the downturn in market.

How is it holding up in the market today? Well ever since the beginning, cryptocurrency gurus or bulls if you will, would look at cryptocurrencies as a safe haven asset. And a safe asset is typically one that will go up when the market's going down. If you look at what cryptos have done in the last couple of days while the stock market's dropped, they've all sold off as well. So if you're looking for a good, safe haven asset, the best direction and the best area that we recommend right now, it's not just gold and silver and platinum, but it's actually palladium. Palladium is one of the metals that has outperformed all the others over the last couple of years. And over the last 10 years alone, it's up more than 400%.

I read that and also if I'm not mistaken, last year in 2017 palladium- and correct me if I'm wrong- hit 56% in one year. And matter of fact, it was the number one performing commodity on planet earth outperforming just about every major commodity that is available to acquire. Right. The one thing that's very unique is, is us being in the precious metals industry. You know, we've been doing this nearly 20 years. We as a company have not had the ability to even sell palladium until last year. That's right. And one of the reasons for that is because of it's lack of availability, high demand, and of course the shortage of supply. And of course with what'd you say, 400% in 10 years? 400%. Wow. I mean, consumers in the stock market right now are probably wishing that they got involved in palladium. To get more information about what we've talked about today; included in this booklet are some of the triggers that we've talked about in the past and some of the ones that we've talked about today. And as always, thank you for watching U.S. Money Reserve's Market Insights and click on the link or call the phone number below.