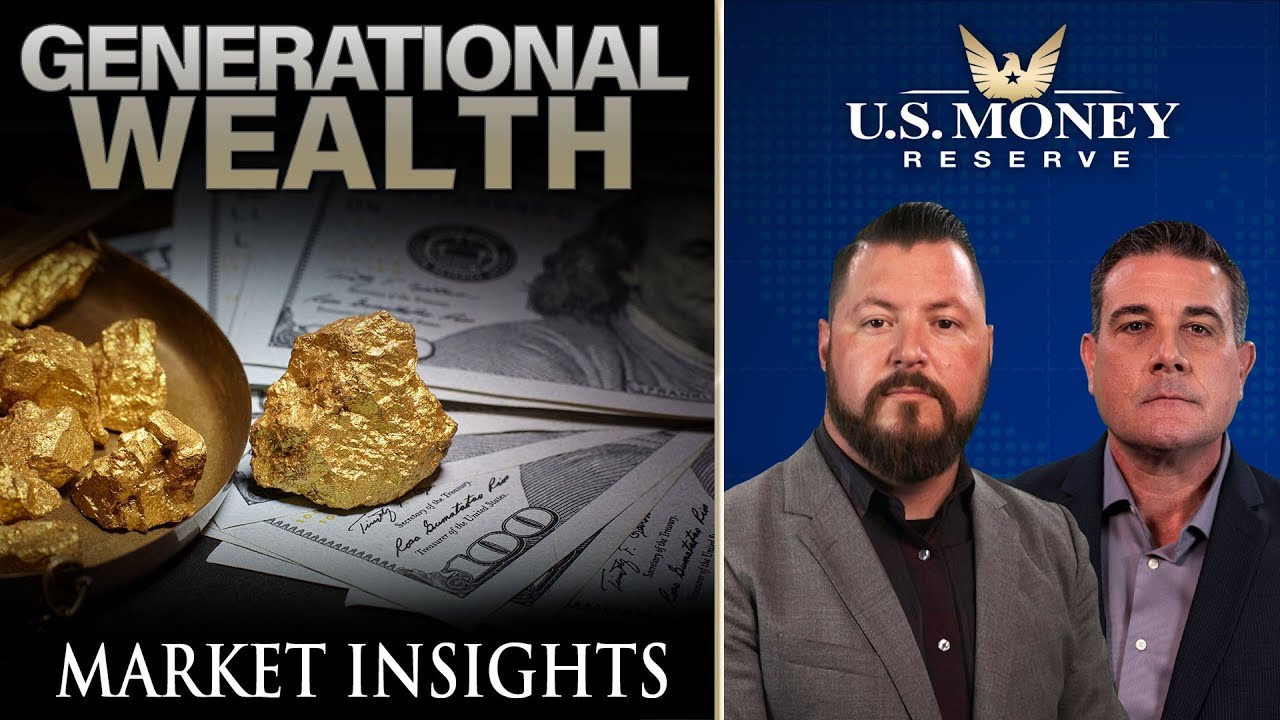 Over the course of the last 10 to 15 years, we have printed more money than at any other point in history since the dollar was created. When the dollar declines, how can you protect your family's legacy? Join Coy Wells and Patrick Brunson to find out how gold can protect your wealth for future generations in today's episode of Market Insights.

Today we're here with Mr. Patrick Brunson and were going to continue our topic in regards to generational wealth. A few weeks ago, we identified that nearly $68 trillion in the next 25 years we'll be rolling out of retirement accounts and will be handed down as generational wealth. And one of the topics is how to protect that money over the course of the next few years and upcoming years over that 25 year span. What are your thoughts on that, Mr. Brunson?

Well, the baby boomer generation is about to retire. They are literally the wealthiest generation we've ever had in U.S. history, and so when this happens, that means that there's going to be a lot of money passed down from the silent generation as well, making baby boomers even more wealthy. The key thing is protecting that wealth because over the course of the last 10 to 15 years, we've printed more money than at any other point in history since the dollar was created. And so generational wealth, the value or the purchasing power of it, could be cut in half.

Yeah, and that's actually one of the biggest discussions with most retirees, that both me and Mr. Brunson deal with on a daily basis, is how do retirees have the ability to be able to preserve their financial wealth and really preserve the value of the U.S. dollar in the near future? One of the topics that has come up over the course of time is gold. Gold has always been a stored value of wealth and power. And one of the things that is now coming to light is we're now hearing more topics about a recession or even a depression in the future. How would a recession or depression, and not only affect US dollar, but how can retirees that have that generational wealth protected it in regards to gold?

Gold is a private asset, meaning that you can put money into it, hold it safely at home privately, and you can pass it off to the next generation, literally one hand to the next. A lot of times, especially with the government going into more and more debt, we're starting to see more and more information about how the government's trying to close the trust loopholes. And so they look at inherited money the same way that they look at gambling earnings. They don't feel that the next generation earned that money through labor, therefore they should take a pretty big chunk of it, just like gambling earnings. So a lot of people are choosing to preserve those dollars that are losing value anyways, protect it in gold, which tends to go up when the dollar comes down, allowing them to pass off that wealth in an appreciating asset as opposed to a depreciating asset to their loved ones and the next generation.

Right. So private wealth is one of the main topics and the other thing too is that we try to work with clients is helping them understand that right now, prior to a recession or depression, the consumer itself has the ability to preserve the value of the dollar as it stands today. If the U.S. dollar sits at about 98 cents on the index and you move money into gold, and theoretically if gold did nothing, and we saw a recession and the dollar pulled back, those consumers have the ability to not only hand down generational wealth, but they had the ability to preserve the value of those dollars, that 98 cents, without gold doing anything, is that right?

That’s correct. So, the big thing is making sure that you protect the money in gold before the dollar drops any lower than that 98 cent mark or before gold increases above the 1300 mark. We've recently seen gold move up almost $70 over the course of the last 30 days because the dollar is starting to drop with trade war scares and things of that nature. But if we go into a recession, it could be far, far more devastating to the dollar, and it's going to have a very positive impact on gold. But, people who are still holding on to paper, cash generational wealth that they're not going to spend in their lifetime, it's going to take a major, major hit.

I agree. The other thing is we saw that in February that the World Gold Council recently announced that the banks here in the United States and central banks had taken a leap towards gold that we hadn't seen in a long time. The banks and central banks had acquired around 651 metric tons, making it the largest acquisition in gold accruals in nearly 50 years or going back to the gold standard in 1971. What's your thought on why the banks would take such a drastic measure going towards gold at this juncture when they didn't do it in the mid-eighties, the recession of 2000, or even the recession of 2008?

Well, again, it goes back to the printing of money. We've printed more money in the last 10 to 15 years than any other point in this nation's history and we're going to have to deal with the repercussions of that money being printed once this money finally hits the economy. That's the big thing that people are ignoring is the fact that the Fed wants a 2% inflation target and we haven't hit it yet. Well, it's because none of that newly printed money has hit the economy yet. So we have to be able to make sure that we're protecting ourselves and being proactive in these situations, especially if we have money we know we're not going to spend in our lifetime, and we plan on passing it off to our loved ones, we have to make sure it's preserved in the right asset.

So, to get more information on this topic, you can get U.S. Money Reserve's latest report: The Secret to Generational Wealth. It has a lot of really good, detailed information on generational wealth and wealth protection overall. So to get your copy, click on the link below, or call the number on your screen. If you liked the information today, please like and share this video. And if you're watching us from YouTube, please subscribe so that you don't miss a single episode. I'm U.S. Money Reserve's Patrick Brunson,

And I'm Coy Wells, and as always, thank you for watching Market Insights.