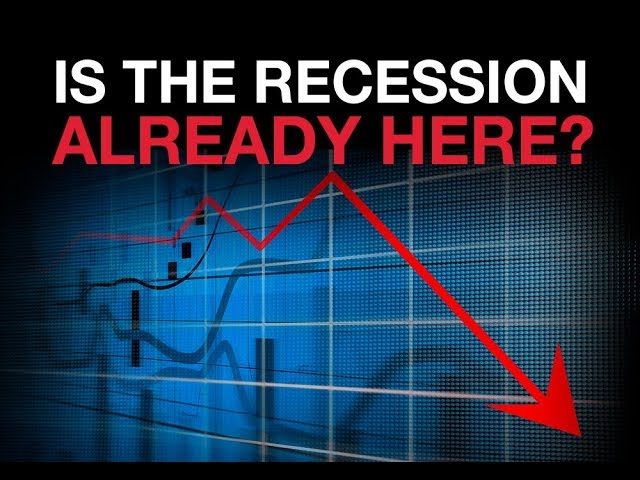 The next recession might be closer than you think. Stocks have been in turmoil recently, but other warning signs are out there that shouldn’t be ignored. Now is more important than ever to stay informed and protect your financial future no matter where the U.S. economy is headed.

As of recently, over the course of the last 30 days, a lot of consumers have been asking me, are we in a recession? I think the government falls into a recession about six months before they actually admit that they're in a recession. And a couple of weeks ago, we talked about the economy of the United States and how it has continuously peaked in multiple areas and that typically is when we start falling into recession territory. Right now, the stock market for the month of November, is in negative territory. And as of this morning, they are currently announcing that we've wiped away all of 2018 games. A couple of things that we have to take note here, is that the oil prices are now hitting bear territory. In my opinion, this is one of the items that we have to look at to identify whether we're in a recession or not. Historically, they talk about oil being an item whether the price is dropping because there's too much surplus or there's not enough surplus.

In my opinion, when we were at the peak of an economy, they reduce the price of oil to ensure that the consumer pays less at the pump. Vacations become cheaper to take, airline tickets become cheaper. That is one of the items that we are looking at as a cash injection back into the economy. If we make more money readily available in our pockets, we're going to spend more money. We're also going into the holiday season. That means Christmas is right around the corner. What that also means is that we should expect that the amount of money that's being spent during the holiday season is going to be higher than normal. That's what they're going to come out on the news and tell us and it will probably be accurate, but it also cannot negate the fact that all the things behind us are taking place. We saw October lose nearly 2000 points.

We're already in November and we're just through the first half going into the second half of the month and we're already at almost over a thousand points with today losing 500 points. These are the key items that we have to look at. There are multiple things that are taking place around us all the way across the board. And if we look at the big foundation companies within the stock market, the losses that they're taking are absolutely massive. And the question I want you to ask yourself, is the amount of money that's being lost in big companies and corporations inside the United States in regards to their stock price. Is the consumer that's out there, you and I, the individuals that are out there that hold a portion of those shares. Can we the people move those shares enough for them to lose 42 billion? We the people, do we have the power to be able to sell enough off in a day to make a company lose $120 billion?

my opinion and my answer is no. That means that companies and corporations are getting out ahead of the curve. They would be the ones that are selling off the majority of those shares to be able to take those losses. What that tells us and should tell you and I is that they're getting out ahead of the curve. This is the same thing we've talked about. These are the indicators that are out there. And you as the consumer, have to ask yourself, regardless of what age you are. I don't care if you're a young businessman, you're at the point of retiring, you're 50, 55 or going into 60 years of age and still working or you're over 60 and you've now retired. The money that we have sitting in those sectors of the market are becoming more at risk and they are becoming at risk at a higher and higher, elevated level than we've seen in a very long period of time.

The information that we provide you on a daily basis is to help you safeguard your money at whatever capacity you choose to do so. We are here to give you the information so you can make the best decisions that are out there. We're trying to give you the telltale signs that are available. All of us at some point in time have been told one thing by itself, doesn't mean anything. But when you start taking all the pieces of the puzzle, lay them out on the table, put them together, it starts identifying and starts to put together a very clear picture. Be sure to click on the link below or call the number on your screen to get access to the newest report, ‘the next recession, here's what it could look like'. So get your electronic copy of this report today, and as always, thank you for watching U.S. Money Reserve's Market Insights.