Is Something Rotten in the State of the Economy? 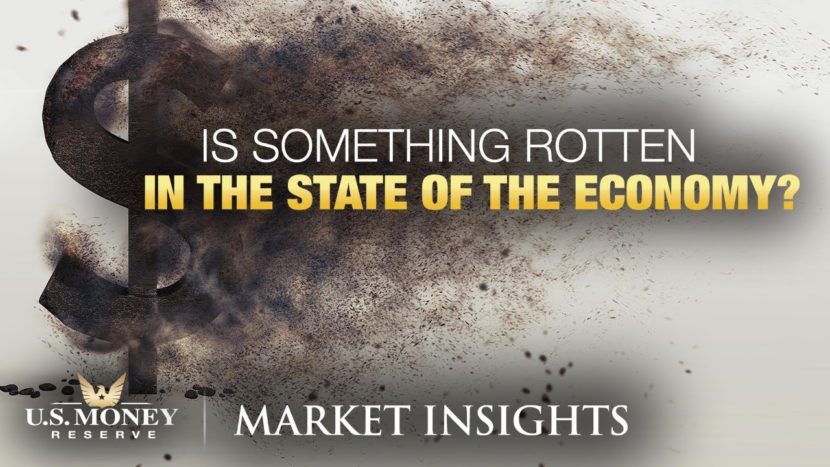 In the span of one week, the price of gold climbed from $1,580/oz to over $1,680/oz. This phenomenal rise was paralleled by a staggering end to a rally in the stock market. But did that rally have hidden costs for the economy all along? Learn more in this episode of USMR Market Insights with Patrick Brunson.

Is Something Rotten in the State of the Economy? – Video transcription

A recent selloff in the stock market was paralleled by a rally in precious metals. In just one week, the price of gold shot from $1,580 an ounce to over $1,680. As part of this journey upward, gold surpassed its highest price in seven years. Other precious metals also rallied, including palladium, which reportedly hit an all time high price of $2,851 an ounce on February 20th. Why all of this was happening, equity markets tumbled. On February 24th alone, CNBC reported that the Dow Jones industrial average dropped over 1000 points. This followed several days of turmoil and losses in the markets which erased gains from earlier in the year. This market selloff comes on the heels of markets rallying to record highs. However, those market rallies are not without their own troubles bubbling under the surface. MarketWatch has reported that some analysts have noted a dual nature to recent economic booms. While some consumers have benefited tremendously from these rallies, other consumers have been left behind to contend with rising costs of basic goods, vehicles, and homes.

This can be demonstrated through credit card delinquency rates. The percentage of people falling delinquent for 30 days or more on their credit card payments has increased among small banks to levels not seen since the financial crisis. The reason this is primarily among small banks is because they can't compete with the offer big banks have for high credit consumers. Instead, they offer cards to consumers with lower credit scores. The astronomic rise in delinquencies is considered among these consumers a symptom of prices and the cost of living growing to levels that they are unable to function at. Call the number on your screen to learn how you can receive information on exclusive diversified portfolio packages of 5, 10 or 30 thousand. Click the link below to receive access to U.S. Money Reserve's latest special report, 25 Reasons to Own Gold, 2020 edition. Please give us your thoughts in the comments below and share this video. Make sure to subscribe to our YouTube channel so that you don't miss a single episode of Market Insights. I'm U.S. Money Reserve's Patrick Brunson, and thank you for watching.