How Important are Government Bond Ratings? 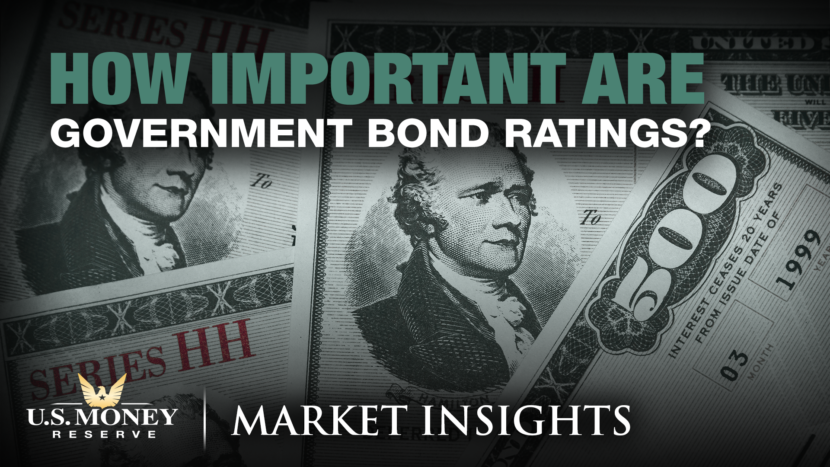 You probably know your own credit score, but do you know the government? Government bonds are rated by major credit agencies across the world, and their scores can have major implications for the economy and you. Learn more in this episode of USMR Market Insights with Patrick Brunson.

When you think of credit scores, you might not think of the federal government. However, the government has their own credit score in the form of bond ratings. Since the government has to issue so many bonds to finance their activities, major credit rating agencies such as Standard and Poor's, Moody's and Fitch assigned sovereign bond ratings to the government to assess their reliability. For a long time, the government's bond rating was at its peak among all credit agencies, but that has changed in recent years. In August of 2011, S and P downgraded the U.S. Government's credit score for the first time ever. The score went from AAA their highest rating to AA+. The move was controversial, but not unprecedented due to the S and P stating they had a negative outlook on the U.S. sovereign debt rating back in April.

While Fitch and Moody did not downgrade their scores, they did state they had a “negative outlook” going forward on different points in 2011 as well. The outlooks from the three agencies have changed several times over the years, but the credit scores have remained the same. These big agencies are not the only ones that have had their eyes on U.S. bonds. Lesser-known agencies have also had their doubts about the reliability of U.S. bonds. In 2012, Egan Jones downgraded their score from an AA+ to a AA, and then again from a double AA to an AA-. In 2013, Chinese credit rating agency, Dugong Global Credit Rating Company, downgraded their score for the U.S. from an A to an A-.

While it seems very easy to track only what the credit scores are for the federal government, there are also scores for state governments. Individual states may also issue general obligation bonds to investors in order to finance their projects. As such, the states are given their own bond ratings. For example, Illinois has the worst score out of all states with a BBB rating by S and P global. While they're at the bottom of the states and ranking, they're not the only state having trouble with their score. New Jersey, not far ahead with an S and P given a score of A- and Kentucky the third-worst with a score of A+.

The credit scores of the government have major impacts on the economy at large. It affects not just confidence in the markets from internal shareholders, but from foreign buyers of bonds. If they don't have any confidence in the United States government paying its debts, well, they may pull out. This could have a radical impact on the U.S. economy and possibly cause a recession or worse than the effects of a recession we're currently in. For a better understanding of issues that many experts say have caused market crashes in the past, please call the number on your screen to get U.S. Money Reserve's latest special report, U.S. Stock Market Crashes: Lessons from the Losses. This report provides many of the causes of previous market crashes in our nation's history. So click on the link below or call the number on your screen right now to get your copy, and please give us your thoughts and share this video. If you're watching us From YouTube, please subscribe to our channel so that you don't miss a single episode. I'm U.S. Money Reserves, Patrick Brunson, and thank you for watching Market Insights.