When Did the U.S. Go off the Silver Standard?

Home » Silver » When Did the U.S. Go off the Silver Standard? 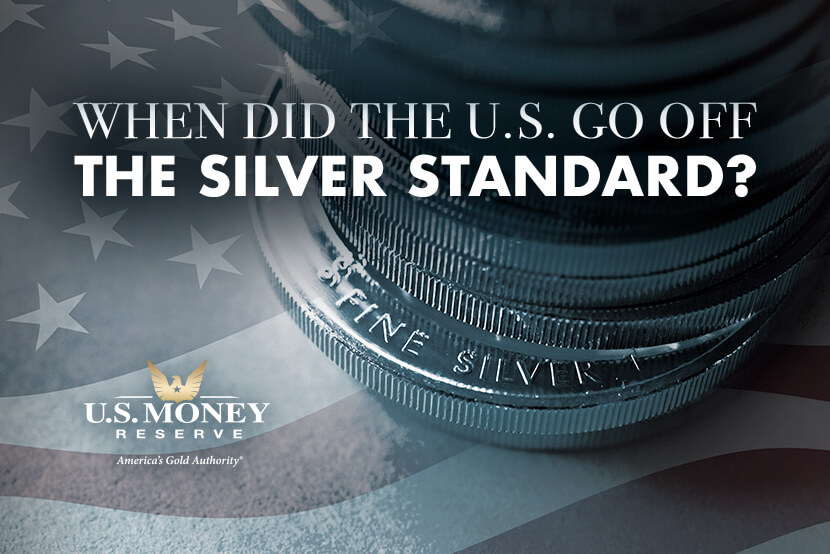 The “silver standard” lasted for centuries, and the U.S., China, India, and Great Britain are countries that had adopted it. The Coinage Act of 1792, which created the U.S. Mint, first defined the dollar relative to silver, not gold.

What Is the Silver Standard?

For the first 40 years of its existence, the U.S. operated on a bimetallic system of gold and silver, according to Investopedia.com.

“However, silver coins were the favored currency, and domestic purchases made with gold were rare,” Investopedia.com reports. “The Founding Fathers wrote a bimetallic gold-silver standard into the United States Constitution.”

At its genesis, the U.S. dollar was initially tied to the more abundant, reasonably priced white metal rather than the scarcer, costlier yellow metal. At the outset, Americans were so skeptical about the creation of paper money that silver certificates—redeemable for silver-dollar coins—were used for decades as legal tender.

The Silver Standard Loses Some of Its Punch

The silver standard lost some of its luster in the 1870s, though.

When President Ulysses S. Grant signed the Coinage Act of 1873 (also known as the Mint Act of 1873 or the Fourth Coinage Act), few people noticed a provision that called for switching the U.S. from a bimetallic standard to a gold standard, according to the U.S. Mint.

Since 1853, people had been able to take silver bullion to the U.S. Mint and get it converted into the standard silver dollar, reports the Mint.

“Just like its gold counterpart, silver had unlimited legal tender. In other words, the value of the coin that could be minted from silver bullion was unlimited. Since the country was on bimetallism, the same principle held true for gold,” explains the Mint’s Office of Corporate Communications.

Before 1873, the only significant difference between the two was that silver coins had become challenging to obtain, according to the Mint. As a result, less silver was taken to the Mint for coinage. Instead, people were hoarding silver coins.

According to ThoughtCo., people stopped spending silver coins and chose instead to sell them or have them melted down.

What Happened to the Silver Standard?

The change in the bimetallic standard went largely ignored until miners sought to have their silver bullion coined into legal tender after the law took effect. The silver miners were rejected, according to the Mint, meaning the metal had been demonetized.

In 1853, the U.S. government moved to debase—reduce the amount of silver—in its silver coinage. While the silver dollar returned as legal tender in 1878, it didn’t last long. And a silver-preserving law known as the Sherman Silver Purchase Act of 1890 was repealed because it undercut gold reserves.

“The attempts to return to bimetallism actually demonstrated the instability of silver [at the time],” according to the Mint website, “and eventually led to the establishment of the gold standard in the United States during the 20th century.”

The Gold Standard Act of 1900 abandoned bimetallism in the U.S., according to Kitco.com. From 1900 to 1933, the U.S. dollar was fully backed by gold, and paper notes could be exchanged for gold on demand. Meanwhile, silver saw a steady decline.

Finally, in 1935, the silver standard withered after China and Hong Kong ditched it in favor of the gold standard, according to Investopedia.com. Two years earlier, in 1933, President Franklin D. Roosevelt had untethered the U.S. from the gold standard. Then in 1971, President Richard Nixon cut the last ties between the dollar and gold when he announced that the U.S. would officially no longer back the dollar with gold reserves.

Though silver often takes a backseat to gold when it comes to precious metals, it offers many of the same benefits as the yellow metal—but usually at a far lower cost. That’s one reason silver represents an excellent, affordable option for a portfolio.

Despite the absence of the silver standard, silver coins (a commonly accepted form of currency for thousands of years) have shown to be an attractive way to store wealth over time, for any buyer at any level. A silver coin’s design, low production numbers, and high marketplace demand can all support a coin’s appeal—and ultimately, its potential upside.

America may have abandoned the gold and silver standard, but you don’t have to. Back your wealth with the power of precious metals. Get started with U.S. Money Reserve today. Call 1-844-307-1589 for a one-on-one consultation with an experienced Account Executive.