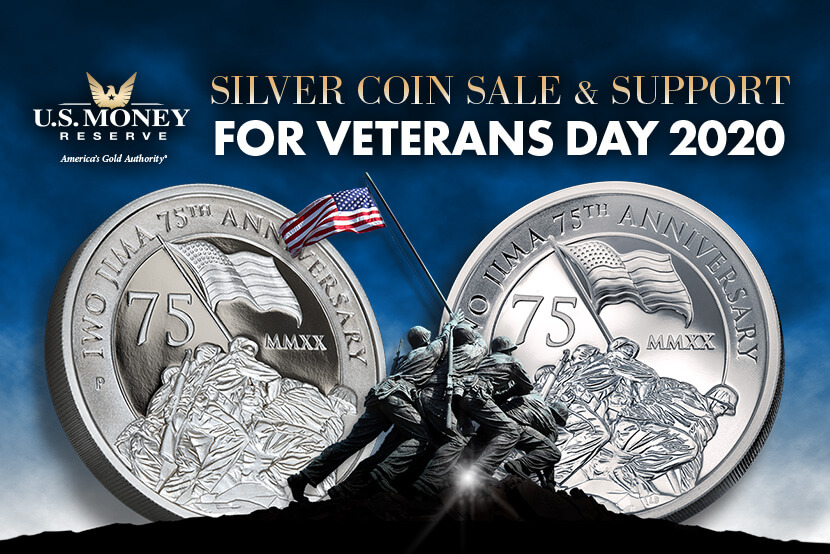 It’s time to salute the roughly 18 million Americans who are military veterans—people who placed their lives on the line to protect our freedoms. Every year on November 11, we pause to reflect on the sacrifices made by our veterans.

You’d be surprised how many ways there are to commemorate Veterans Day. You can participate in the two-minute Veterans Day moment of silence, visit a veterans memorial or cemetery, wear a poppy or other pro-veteran item, or donate to a reputable charity or service organization that benefits veterans.

You also can show your pride for our military veterans by taking advantage of U.S. Money Reserve’s special Veterans Day sale. In addition to offering our exclusive Iwo Jima coins during this sale, we’ll make a one-time donation to WISH for OUR HEROES. This nonprofit organization grants the wishes of active-duty members of the military and military veterans.

The 5 oz. and 1 kilo Iwo Jima coins are new coins that haven’t been featured online until now.

Furthermore, you can receive a free copy of the exclusive hardcover book Iwo Jima: Raising a Tribute 75 Years Later if you buy an Iwo Jima coin by phone. Read it aloud with loved ones to raise awareness for Veterans Day!

For Veterans Day, U.S. Money Reserve will also donate to WISH for OUR HEROES.

The year 2020 marks the 75th anniversary of raising the American flag on Iwo Jima, an occasion captured in a now-famous photo and immortalized with an iconic statue. U.S. Money Reserve exclusively offers the coin series honoring the 75th anniversary of this event. U.S. Money Reserve designed the coins in collaboration with Australia’s Perth Mint. These government-issued coins are struck from 99.99% pure silver.

Aside from the WISH for OUR HEROES donation, U.S. Money Reserve shows its appreciation for veterans and active-duty military members in several ways.

One of those ways is the Wings of Gratitude initiative.

U.S. Money Reserve kicked off the Wings of Gratitude campaign in June to encourage Americans to express their gratitude for veterans and active-duty military members. From sending handwritten letters to unique drawings or even a touching photograph, families can show gratitude in unique ways while teaching children about the commitment active-duty military members and veterans make to preserve American freedoms. Army veteran, burn survivor, actor, motivational speaker, and New York Times best-selling author J. R. Martinez, winner of Season 13 of Dancing With the Stars, is the campaign’s ambassador.

U.S. Money Reserve is giving a 1 oz. Iwo Jima 75th Anniversary silver bullion coin to every active-duty military member or veteran who receives a message of support through Wings of Gratitude, for the first 10,000 messages delivered.

“As longtime supporters of our nation’s veterans, we wanted to develop a new initiative to give back to our nation’s military heroes while creating a fun and gratifying experience for families to get involved in through a creative service project,” says Angela Roberts, CEO of U.S. Money Reserve. “Having families send positive messages reminds our active military members and veterans that we are thinking of them, and they have our unwavering support.”

U.S. Money Reserve also is cosponsoring the World War II Foundation’s upcoming documentary about the Battle of Iwo Jima (narrated by Gary Sinise). It’s expected to air on PBS stations across the country.

“We respect and cherish the World War II Foundation for all that they do to honor the legacy of our veterans,” Roberts says. “I strongly believe it is our duty to honor our past, present, and future veterans. This effort allows us a wonderful avenue for our continuing commitment to pay tribute to the men and women of World War II by ensuring that their stories live on.”

Our exclusive Iwo Jima coins pay tribute to one of World War II’s most powerful moments—raising the American flag on Japan’s Mount Suribachi during the Battle of Iwo Jima. To show your support for our nation’s heroes, you can purchase any of our Iwo Jima coins, and for a limited time, we will donate to WISH for OUR HEROES.

What Could a Record-Breaking Gold-to-Silver Ratio Mean for You?
2020-11-24
Free Gold Information Kit