4 Military-Themed Coins & the Stories Behind Them

Home » Coins » 4 Military-Themed Coins & the Stories Behind Them 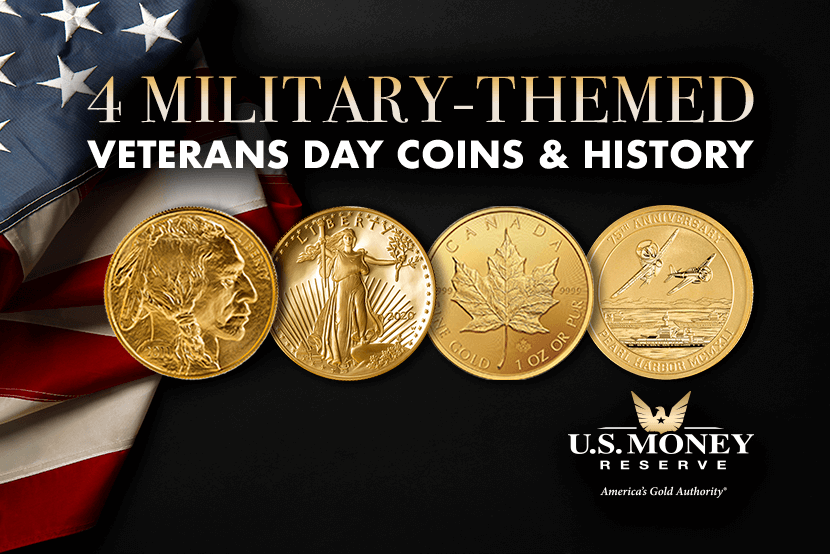 Parades are great. So are handshakes and salutes. But do you know another way you can express your appreciation for our military veterans? You can honor them with something that stands strong and solid even when times take a turn for the worse: physical gold.

The Japanese attack on Pearl Harbor in December 1941 marked America’s entry into World War II and represents one of the most crucial moments in U.S. history.

To pay tribute to the sacrifices made at Pearl Harbor, U.S. Money Reserve released a series of pure gold and silver coins in commemoration of the attack’s 75th anniversary in 2016. The coins are available exclusively from U.S. Money Reserve.

Certified versions of the Pearl Harbor series can also be purchased by phone from U.S. Money Reserve.

The design of the Gold American Buffalo coin dates back to 1876 and the Battle of Little Bighorn, also known as Custer’s Last Stand. The battle pitted U.S. Army soldiers against Native American tribes.

Thomas Fraser, the father of Buffalo Nickel artist James Earle Fraser, was among the men sent to claim the fallen soldiers of Custer’s Last Stand. The younger Fraser’s exposure to this and other events on the frontier influenced many of his works, including his designs for the Buffalo Nickel.

In 2006—140 years after Custer’s Last Stand—James Earle Fraser’s designs showed up on the one-ounce Gold American Buffalo coin, released to the public under the Presidential $1 Coin Act of 2005. The Gold Buffalo was the first 24-karat gold coin ever minted in the U.S.

Introduced in 1979 by the Royal Canadian Mint, the Canadian Gold Maple Leaf coin reigns as one of the world’s most popular coins. It’s the first bullion coin ever to contain one ounce of .9999 fine gold.

Appearing on the front of the coin is the maple leaf, the symbol of Canada. While the maple leaf isn’t directly tied to the military, the figure on the reverse side of the coin is. That figure, Queen Elizabeth II, is the monarch of the United Kingdom and associated lands, including Canada.

Queen Elizabeth II, the United Kingdom, and Canada are among the staunchest allies of the United States. As queen, Queen Elizabeth II leads the British armed forces. In 1945, she joined the Women’s Auxiliary Territorial Service, becoming the first female member of the royal family to join the armed services as a full-time active member. During her military stint, the then-princess learned to drive and maintain vehicles.

Military.com notes that Queen Elizabeth II is the only head of state to have served in World War II.

In June 2019 remarks surrounding the 75th anniversary of the D-Day invasion of Normandy, France, Queen Elizabeth II said that on that day and many occasions since, the British and U.S. armed forces have fought side by side “to defend our cherished values of liberty and democracy.” She added that we owe “an immeasurable debt” to British, American, and Allied soldiers who battled on D-Day, which began liberation of Europe at the end of World War II.

President Ronald Reagan changed American gold ownership forever when he signed the Gold Bullion Act of 1985. The law authorized the first Gold American Eagle coin to be produced by the U.S. Mint.

Reagan served as president from 1981 to 1989—that’s eight years as U.S. commander-in-chief. However, Reagan also served under two commanders-in-chief (Presidents Franklin D. Roosevelt and Harry S. Truman) as an active-duty member of the U.S. Army Reserve and U.S. Army Air Forces from 1937 to 1945. With his duty limited by poor eyesight, Reagan spent much of his time in the military helping create about 400 training films for the Army Air Forces. He closed out his military career at the rank of captain.

Call U.S. Money Reserve at 1-844-307-1589 to purchase any of the military-themed coins you’ve just learned about. Honor our veterans’ legacy for generations to come.