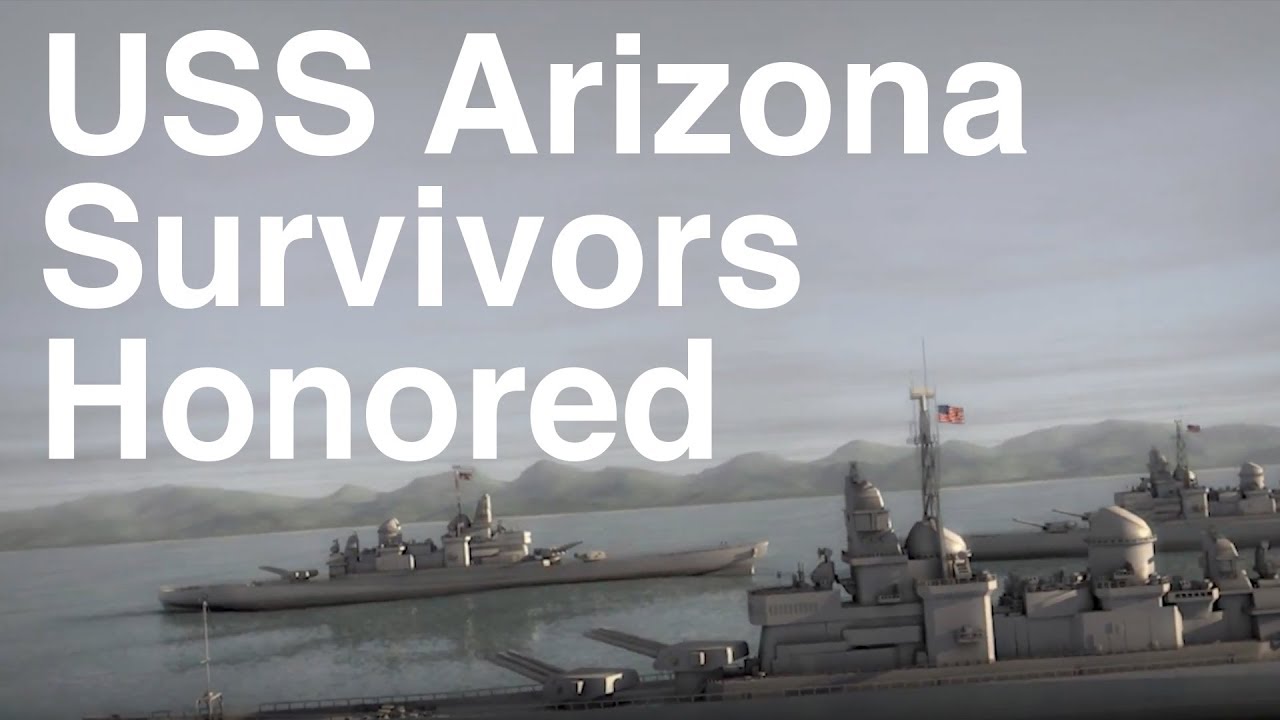 Watch as USS Arizona survivors and their families are honored in Washington D.C. with the presentation of a 75th Anniversary Pearl Harbor Silver Coin. Listen to interviews with two men and one survivor’s daughter, as they recount their memories of fellow sailors and the day that changed their lives, and America, forever. See how you too can honor those who served by purchasing a Pearl Harbor Silver or Gold Coin.

Frank Thorpe: It is a singular honor for me, today, to be in the room with you all. I served in the Navy for 28 years and I was on the Arizona memorial for the 60th anniversary of the attack, and it continues to be one of my most heartfelt and emotional memories. The two gentlemen that are here with us today literally paved the path that I walked on for 28 years, serving in the Navy and retired as a rear admiral, was a singular experience that was provided to me by the people I served with and by the people who served before me. I now have the great honor to be the president and CEO of the Navy Memorial. And the reason I do that is because our mission is to honor, recognize, and celebrate the men and women of the United States navy, past, present, and future, and to inform Americans about what they do. And that’s not just a mission to me, that’s a passion. I think that all Americans do that. It’s kind of neat having a mission that is so in-sync with who we are as a people. So today I just don’t even know where to begin to talk about these two gentlemen that are here, and I think Ken Potts was unable to join us today?

Frank Thorpe: We are in the midst, at the Navy Memorial, of putting a Lone Sailor Statue. Lone Sailor Statues are about 7-feet tall and you’re probably familiar with them at the Navy Memorial. And I was just out at Pearl Harbor because I approved the site to put it at Valor Park. There will be a Lone Sailor Statue at Valor Park, overlooking the Arizona memorial. It will be overlooking that memorial as a representation of America, looking at people like Don Stratton and Lauren Bruner, who gave everything they had that day to put us on course to win that war. The very first people who were involved in that attack. My father parachuted into Normandy in World War II, and I heard often, when I dragged it out of him, the stories that he went through. When I look at Joe Ann has done here to go to the effort to recognize the lifesaving efforts that you went to. And then just to claim, I think the quote is, “somebody had to be somewhere”, is that the quote? I was in the Pentagon Sept. 11, 2001. I didn’t save anyone’s life, but I know what it’s like to be on the other end of a hostile effort and total surprise. And I think I appreciate what it was the decisions you made to not break the ship apart, to not separate the two ships, in order to continue to save people. Gentlemen, hopefully, today is the beginning of a couple of days that continue the recognition of your service, of what you done and represent for this country. We literally are who we are, not just for what you did that day, not just for the struggles and the recovery you went through, but for the example you have set for all the generations that follow. There are 3-year-old and 5-year-old children in the United States today that will be told 30, 40, 50 years from now, they met you. You are a hero. And for that, we cannot tell you how much we appreciate that.

Frank Thorpe: The statue that we’re going to put at Valor Park, the base of it will be constructed with metal from the USS Arizona, your ship. We are able to put that statue there, because of the U.S. Money Reserve. These gentlemen here, all three of these gentlemen, represent a company that, as you are all aware, created a coin for the 75th anniversary of Pearl Harbor. And that coin is more than a valuable token in financial terms, it’s a valuable token representing what you all did, and what we did as a country to stand up to aggression, and what we will be called upon again and again and again in the future to defend our democracy and our way of life. They took a lot of that revenue that they generated and they literally, single-handedly, are responsible for the statue that will be placed at Pearl Harbor on the Navy’s Birthday, Oct. 13, 2017, overlooking your ship. And for that, I say thank you to the U.S. Money Reserve. I say thank you to everyone in this room who has put this together. Joe Ann, I take my hat off to you, because as these two gentlemen, and one of their spouses, and it always takes a family to get here, and you happened to be in that place in 1950 in order to be here today when they met, and thank you for what you’ve done to bring this story to life, and continue to bring it to life, and continue the recognition of what single individuals did that day. So at this point, it is my honor introduce two individuals from the U.S. Money Reserve: Staff Sergeant Hosea Perkins and Master Sergeant Ramon Rodriguez, who is going to make a presentation on the behalf of the U.S. Money Reserve. To you two, and to all of you at the U.S. Money Reserve, thank you for your heartfelt, incredibly heartfelt appreciation the U.S. Money Reserve has for those folks who have served and have sacrificed on the behalf of us.

Hosea Perkins: As a fellow veteran myself, along with my colleague Master Sergeant Rodriguez, it’s truly a privilege to be standing here in the presence of two USS Arizona Survivors. On behalf of US Money Reserve, I would like to present to each of you a token of our sincerest appreciation. Please accept this Pearl Harbor Silver Coin in honor of your bravery and commitment to protecting our nation’s freedoms and freedoms of generations to come. This silver coin is made from 5 ounces of pure silver and commemorates the 75th anniversary of that infamous day in history.
Mr. Donald Stratton, please come forward.

Donald Stratton: Thank you very much. I really appreciate it. You also, thank you.

Hosea Perkins: And to the man responsible for saving the lives of two of the men honored here today, the late Mr. Joe George, of the USS Vestal, we thank his daughter, Ms. Joe Ann Taylor, for accepting this token in his honor. Mr. Joe George has long been considered an honorary crew member of the USS Arizona.
Joe Ann Taylor: Thank you.

Hosea Perkins: I would also like to extend a special thank you to Navy Reserve Officer, Matthew Previts, for organizing this incredible trip, and for allowing us to take part in it. Retired US Rear Admiral, Frank Thorpe, President and CEO of the US Naval Memorial Foundation, for his continuous support. And our special colleague Mr. Andy Abel. Again, thank you for allowing us to be here. We wish you a wonderful trip visiting our nation’s capital and wish you a safe return home. Let’s give the honorees a round.