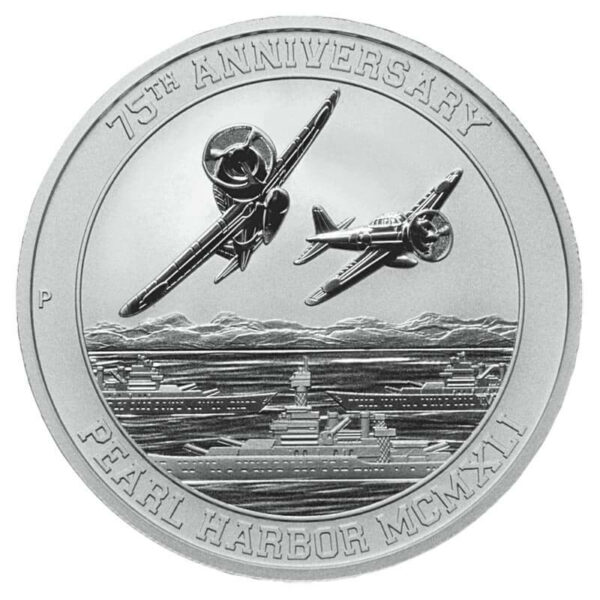 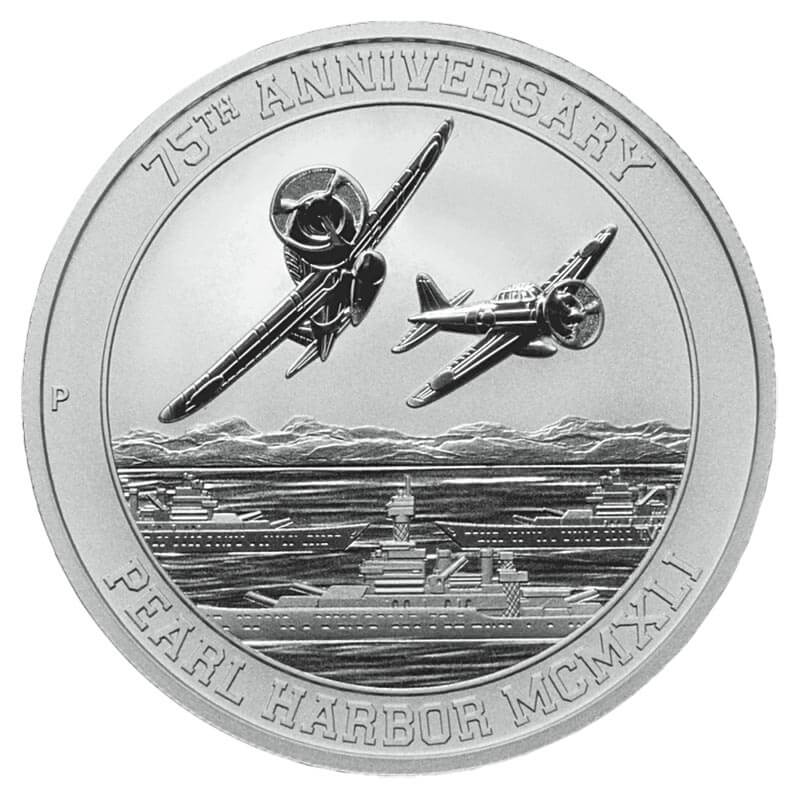 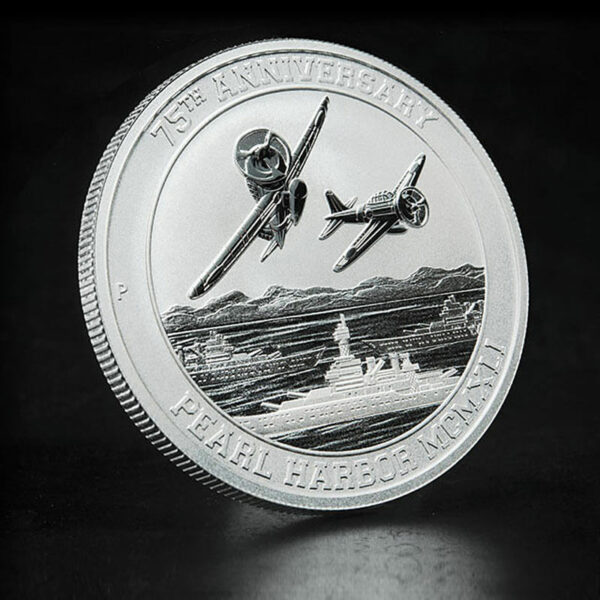 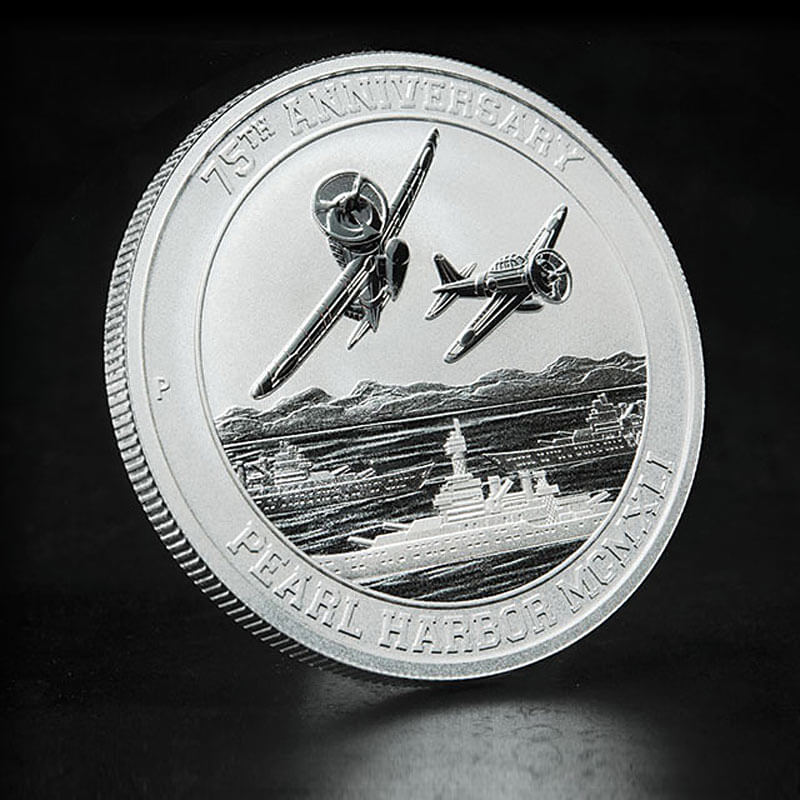 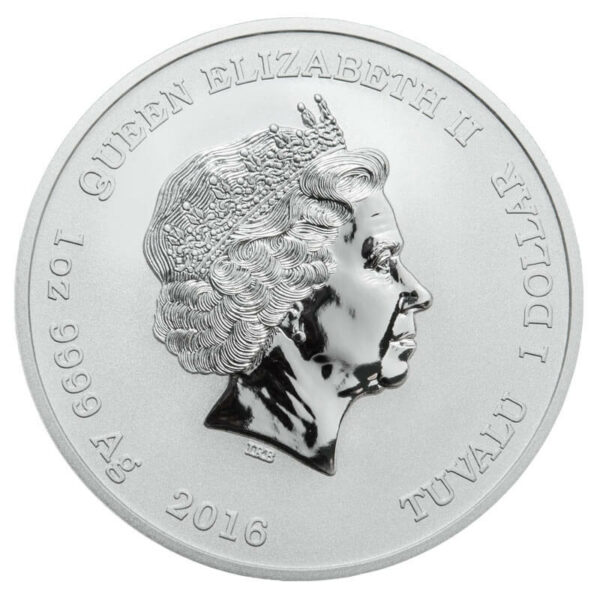 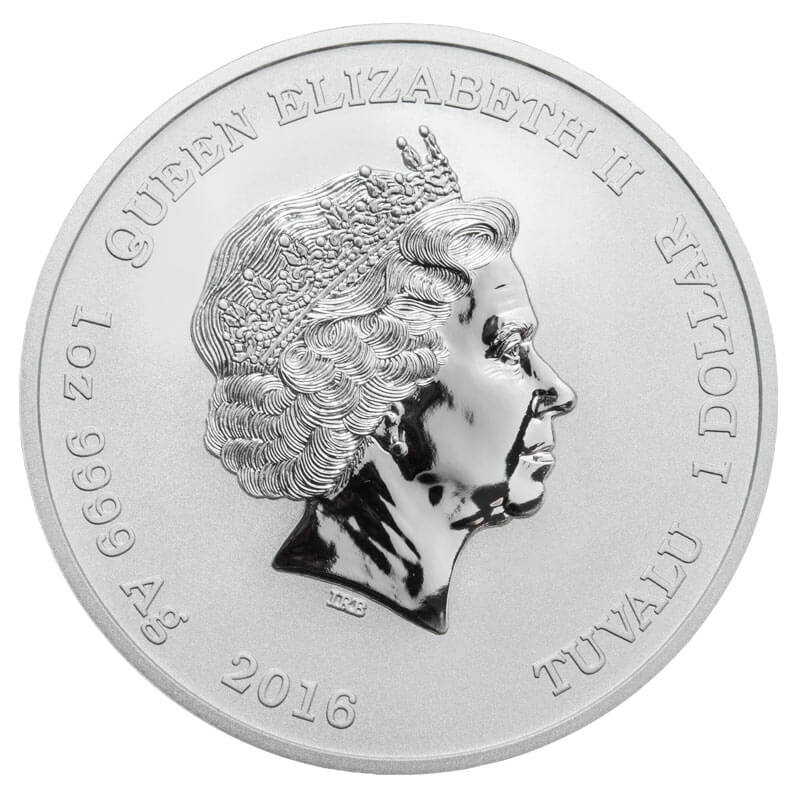 SOLD OUT!    Honor one of the most important moments in world history with pure .9999 silver! U.S. Money Reserve has the worldwide exclusive of the ONLY 75th Anniversary Pearl Harbor Silver Coin. Each 1 oz. silver bullion coin is government-issued and authorized official legal tender.

A new solid silver coin has joined the ranks of some of the most renowned bullion coins in the word: the 1 oz. Pearl Harbor Silver Coin. Struck from 99.99% fine silver, this limited production silver bullion coin is official legal tender and struck from the highest purity possible.*

Few silver coins can compare to the Pearl Harbor solid silver coin. This 1 oz. silver coin honors one of the most important moments in world history, but also puts the power of silver in your hands. As a precious metal, silver can work as a hedge against inflation, a means of potentially growing your existing pool of wealth, or a tool for financial survival in the event of a financial crisis.

The U.S. Money Reserve is proud to offer this first-ever legal tender silver coin honoring the 75th anniversary of the attack on Pearl Harbor. Each coin is guaranteed for its silver weight, content, and purity. A well-balanced portfolio includes a portion of silver coins or bars.

When you buy Pearl Harbor Silver Coins, though, you do more than enhance your precious metals portfolio. You help this great nation honor one of the most important moments in history. Proceeds from U.S. Money Reserve Pearl Harbor Silver Coins helped fund the Lone Sailor Statue at the National Park Service’s Pearl Harbor Visitor Center, which was ceremoniously unveiled on the 225th birthday of the U.S. Navy, on October 13, 2017. The statue, designed by Stanley Bleifeld, stands watch over the U.S.S. Arizona Memorial erected in honor of the bravery displayed during the attack on Pearl Harbor.

After years of planning, designing, and collaborating, U.S Money Reserve partnered with the world-renowned Perth Mint in Australia to produce this family of Pearl Harbor gold and silver coins. The Perth Mint remains one of the most established and trusted names in government-issued coin production, with a shared history of Allied Forces uniting as defenders of freedom in dark times.

Philip N. Diehl, President of U.S. Money Reserve and former Director of the U.S. Mint, personally oversaw the coin's production, from its design to its release on March 1, 2016.

Each Pearl Harbor Silver Coin is crafted with impeccable details. The obverse design honors our wartime Allies, Australia and Great Britain, with an official portrait of Her Majesty Queen Elizabeth II by Ian Rank-Broadley.

It’s the scene that set the stage for America’s entry into WWII and a victory that dispatched European and Asian aggressors bent on global domination. This moment is forever memorialized with the inscriptions “75TH ANNIVERSARY PEARL HARBOR MCMXLI” and Perth Mint’s highly-recognizable “P” mintmark.

In all, more than 15 U.S. naval ships and 188 U.S. aircraft were destroyed and 2,403 American military and civilians were killed, while 1,178 others were wounded. The design on the back of the 1 oz. Pearl Harbor Silver Coin helps make sure that these brave men and women are never forgotten.

IRA-eligible silver coins must be produced by a government mint or accredited refiner/assayer/manufacturer and meet a minimum fineness of .999.

The 1 oz. Pearl Harbor Silver Coin is one of the few IRA-approved silver coins available for inclusion in Self-Directed Individual Retirement Accounts, and it can play a vital role in your retirement strategy.

So many Americans lack sufficient retirement savings. In fact, America’s retirement savings situation could be on its way to being declared a catastrophe. You can be different. Solid silver coins can help you weather fierce economic storms. That’s the kind of strength and resilience any reliable retirement strategy needs.

How Much Do 1 oz. Pearl Harbor Silver Coins Cost?

Very, very rarely can you buy silver at spot price. Silver coin prices—along with Pearl Harbor Silver Coin prices—are driven by a variety of factors including industrial demand and demand for silver jewelry, coins, and medals; the price of gold, as silver tends to follow the price of gold in terms of direction; government policies and actions; the relative strength of the U.S. dollar; and inflation and interest rates.

As a bullion coin, a Pearl Harbor Silver Coin's market value is also tied to its weight in silver (in this case, 1 oz.) and the current market price of silver, which can make it an ideal choice for liquid, short-term holding.

Pearl Harbor Silver Coins are imprinted with their silver content and legal "face" value ($1), though their numismatic value can be much greater. The price of silver bullion coins may vary depending on fluctuating market conditions. Speak with a U.S. Money Reserve Account Executive for in-the-moment pricing on 1 oz. Pearl Harbor Silver Coins.

Where Can I Buy 1 oz. Pearl Harbor Silver Coins?

You can buy 1 oz. Pearl Harbor Silver Coins and other government-issued silver coins online or over the phone from U.S. Money Reserve, America's Gold Authority®.

U.S. Money Reserve has proudly served hundreds of thousands of clients worldwide and remains one of the largest silver coin distributors in the country. Contact us today if you are interested in respectfully commemorating a key point in this nation’s proud naval history with the limited-edition 1 oz. 75th Anniversary Pearl Harbor Silver Coin. This is your chance to honor those who fought to protect our freedoms and diversify your hard-earned money with the tangible asset of physical silver.