As retirement savers face uncertain and tumultuous times, the rising popularity of the Self-Directed IRA comes as no surprise. Many are frustrated with the limited options, high fees, or portfolio performance of their current retirement accounts and looking elsewhere to maximize control of their financial future. If your long-term goal is creating lasting wealth in a safe, convenient, and tax-advantaged way, then retain command of your retirement with a Self-Directed IRA.

A Self-Directed IRA gives you ultimate flexibility when it comes to safeguarding your future by putting you in complete control of your asset mix. You direct your own funds rather than a custodian holding your money and making those crucial decisions for you. Self-Directed IRAs also have the added benefit of greater profit potential because you can choose from a wider range of options.

A Self-Directed Precious Metals IRA combines the traditional protection of gold and silver with the modern convenience of an IRA. A Self-Directed IRA should play a key role in shielding your savings whether you’re new to gold and silver ownership or already hold retirement accounts, including existing IRAs, as well as 401(k) and 403(b) plans.

“As people seek to maximize control over their financial futures, more and more of our clients are diversifying their portfolios with physical precious metals as a form of asset protection.”

With paper assets tied so closely to the dollar, you run a high risk of volatility—especially in the event of a financial crisis. Gold historically moves inversely to the direction of equities and mutual funds, making it an ideal retirement portfolio diversifier.

Traditional IRAs are limited to only approved stocks, bonds, mutual funds, and similar vehicles. A Self-Directed IRA provides a vital risk diversification option that traditional IRAs can’t match: the ability to hold hard assets such as gold and silver.

Not only can a Self-Directed Precious Metals IRA provide a hedge against inflation and a devaluing dollar, but it also can provide tax-deferred—or tax-free—growth, while you’re saving for retirement. This can provide an ideal place to hold part of your nest egg.

Precious metals not only serve to protect your wealth, but they can also grow your hard-earned savings over the long term.

HOW TO GET STARTED

Before you put any retirement funds into gold, your first step is to establish a Self-Directed IRA. You can either choose between a transfer or a rollover, as well as create an entirely new account. Here’s how it works.

A transfer is one of the easiest ways to diversify a portion of your retirement savings into precious metals. When you transfer existing retirement funds into a Self-Directed Precious Metals IRA, the distribution check is not sent to you. The original IRA custodian transfers the funds directly to your new IRA custodian. Transfers do not require IRS reporting and can be made as often as you’d like—without any tax penalties. U.S. Money Reserve can help you organize these types of transfers.

If you already have an existing IRA, 401(k), or other qualified account, then you have the option of rolling over a portion or all of it into a Self-Directed Precious Metals IRA. Since the rollover process is the same as any other retirement fund, it’s a relatively simple process. The IRS allows you to withdraw your retirement dollars from your old custodian and deposit the distribution with your new custodian. This tax-free transaction must be done within 60 days to maintain your tax-deferred status and can be performed only once per year.

“Gold is known for its indisputable intrinsic value and status as a long-term store of wealth.”


Add Gold to Your IRA in 3 Simple Steps:

See how easy it is to balance your portfolio and enjoy the benefits of a Self-Directed IRA with the added security of physical gold and silver. Through U.S. Money Reserve’s IRA program, the entire process is handled for you by your dedicated and highly trained IRA Account Executive.

Once you’ve made the wise decision to include physical precious metals in your retirement plan, we’ll assist you in opening a Self-Directed IRA with a qualified custodian that best serves your financial goals.

When you’ve opened your Self-Directed IRA, we’ll work directly with your new custodian to fund your account by either transferring or rolling over your existing retirement funds or starting fresh with an entirely new account.

When your account is funded, we’ll contact you to order the precious metals you want to include in your Self-Directed Precious Metals IRA. We’ll then arrange insured and discreet delivery to an IRS-approved depository for secure holding.

The Internal Revenue Code currently allows select precious metals to be held in IRAs. Certain coins, bars, and rounds that meet the minimum fineness requirement and are produced by a national government mint or an accredited refiner/assayer/ manufacturer are approved for inclusion in IRAs.

The U.S. Mint. Gold and Silver American Eagles are among the world’s best-selling coins. Each coin is backed by the U.S. government for its metal content, weight, and purity.

The U.S. Mint. Platinum American Eagles are the first official platinum coins of the United States. Each coin’s purity, weight, and content are guaranteed by the U.S. government.

Various mints. For larger gold and silver diversification needs, gold and silver bars are available in a variety of sizes from only the world’s most trusted government and private mints.

The Perth Mint. The .9999 Gold Australian Kangaroo and .999 Australian Silver Kookaburra are one of the few legal tender bullion coins to change their designs every year.

The Perth Mint. These exclusive legal-tender Iwo Jima 75th Anniversary coins are struck from .9999 fine gold and silver, respectively, and pay tribute to one of the most iconic moments in American history.

The Perth Mint. Each Pearl Harbor 75th Anniversary coin boasts the highest purity possible of any sovereign-minted coin and is struck from .9999 pure gold or pure silver. Few others honor America’s military heroes like these exclusive legal-tender coins.

Proofs coins undergo a specialized minting process in which gold blanks are hand-loaded into a coin press and struck multiple times to achieve a high level of detail. They are notably produced with a frosted image above a mirror-like background.

Mintage refers to how many of a specific coin were originally issued by its minting institution. Proof Gold American Eagle mintages have almost always been lower than their bullion counterparts.

Because of their lower mintages, Proof American Eagles are inherently more rare than the bullion version. For example, 1.5 million of the 1 oz. Gold American bullion coin were issued in 1999, but less than 26,000 of the proof version were made.

By law, the bullion version of the Gold American Eagle must be produced in sufficient quantity to meet public demand—but proof coins are not. In fact, bullion gold demand was so high in 2009 that there wasn’t enough left to produce the proof coin.

A proof coin can provide greater insulation from spot price volatility than bullion alone because its metal weight is just one part in determining its profit potential. This sector has seen substantial gains over the long term. 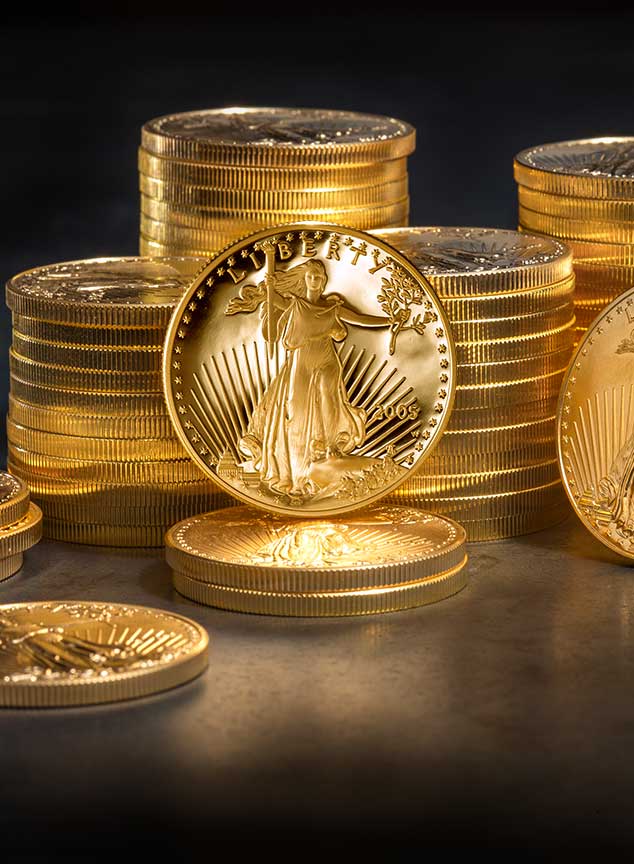 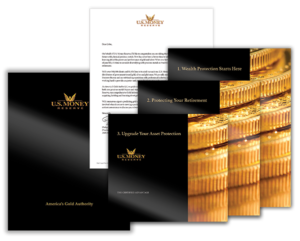 Get started now with a free IRA
consultation by calling:

Enter your information below and we will send you information about our Precious Metals IRA Program. It's easier than ever to add precious metals to your IRA.

By clicking the button above, you agree to our Privacy Policy and User Agreement and authorize U.S. Money Reserve to contact you, including by text message or at any telephone or mobile number you provide, even if your telephone number is on the National Do Not Call Registry. To opt-out at any time click here.

Get started now with a free IRA consultation by calling:

Enter your information below and we will send you information about our Precious Metals IRA Program. It's easier than ever to add precious metals to your retirement portfolio.

*To be applied toward initial setup and storage fees for the first year. For rollovers/transfers: minimum precious metals purchase of $25,000 required. For new accounts: precious metals purchase of $6,000 on select inventory required. Portfolio packages subject to available inventory and current retail pricing. One-time use only valid for one transaction. Cannot be combined with any other offer. Limit one per household. Offer valid for qualifying first-time customers only. Offer valid while supplies last. This offer is subject to change without notice, at the Company’s sole discretion. Nothing herein should be considered as tax or retirement advice as U.S. Money Reserve cannot and does not offer tax advice. Clients should consult an attorney or tax advisor for specific tax or legal advice. USMR does not guarantee the performance or service of any depository or IRA custodian. Estimated third-party storage and administrative fees are subject to change at the discretion of the selected independent IRA custodian and depository. Offer void where prohibited.