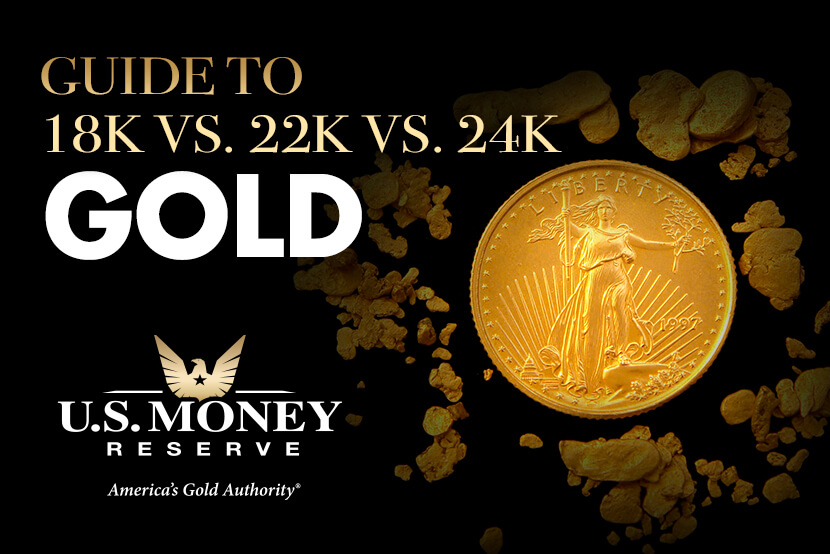 Gold is gold is gold. Or is it? The potential of your precious metals portfolio could be significantly impacted by the purity of the gold coins within it—and yes, gold purity can vary. Learn the key differences between 18k, 22k, and 24k gold coins so you can choose the best product for your needs.

Before we get too far, let’s go over a couple of major definitions: karatage and fineness.

What follows is the breakdown of precious metal content for 18k, 22k, and 24k gold.

In the world of coins, those made of 24k gold can be among the most coveted, but 22k gold coins certainly don’t go unnoticed. Gold American Eagle Coins are made of 22k gold and despite the fact that the U.S. Mint is required to issue Gold Eagles “in quantities sufficient to meet public demand,” they’ve been unable to do so multiple times. The demand for the coins was simple too high. Also, because 22k coins contain copper, they're physically sturdier than 24k gold coins.

More gold usually equals more money paid for a coin, especially with gold bullion coins, but that's not always the case. Certified gold coin prices can also vary based on a coin's grade, condition, and availability.

Forbes.com declares that the American Eagle and American Buffalo are among the best gold coins for North American asset holders.

Why buy gold coins over jewelry?

So, why buy gold coins such as the American Eagle or American Buffalo (or even gold bars) instead of gold jewelry? Annual jewelry demand barely changed in 2018, after a 3 percent YoY drop in Q4 demand reversed the Q3 gains, reports the World Gold Council. The reason for this flat demand could be threefold:

The TaxAct Blog cites several other reasons to consider adding gold coins to your portfolio, including:

The bottom line is that coins can be one of the best ways for asset holders to buy gold, according to Forbes.com, because they’re highly liquid and easy to sell or trade. Plus, gold coins may offer higher premiums than gold bars do. These are just a couple of golden reasons to buy gold coins vs. other types of the precious metal.

*Nothing herein should be considered as tax or retirement advice as U.S. Money Reserve cannot and does not offer tax advice. Clients should consult an attorney or tax advisor for specific tax or legal advice. U.S. Money Reserve does not guarantee the performance or service of any depository or IRA custodian. Estimated third-party storage and administrative fees are subject to change at the discretion of the selected independent IRA custodian and depository.