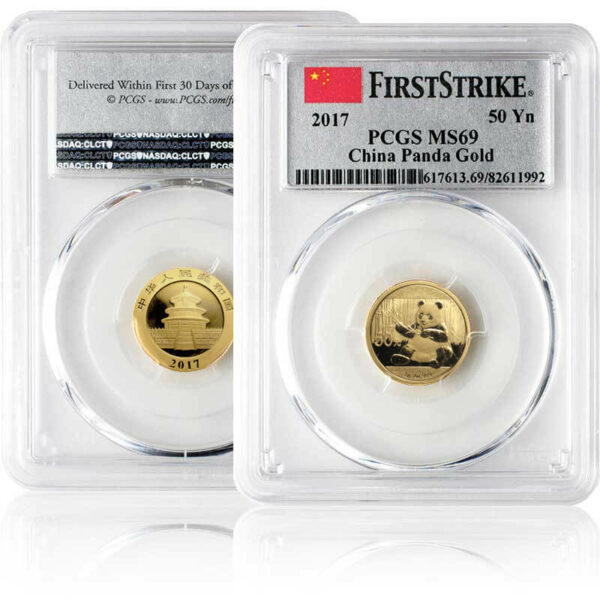 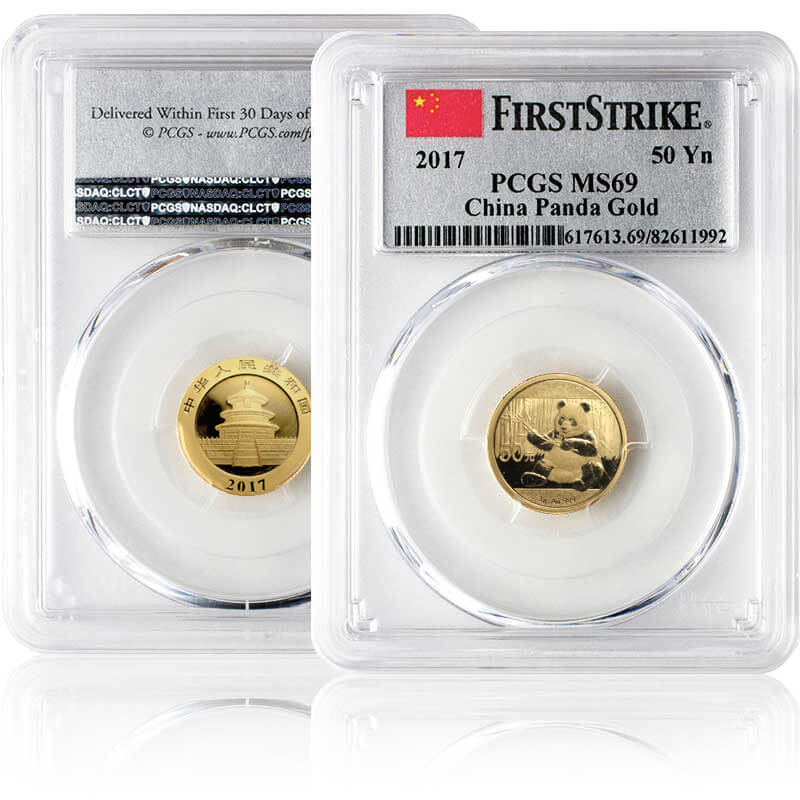 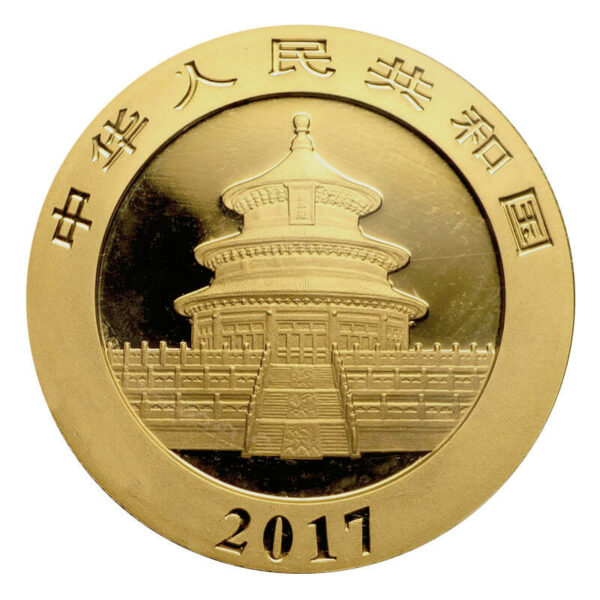 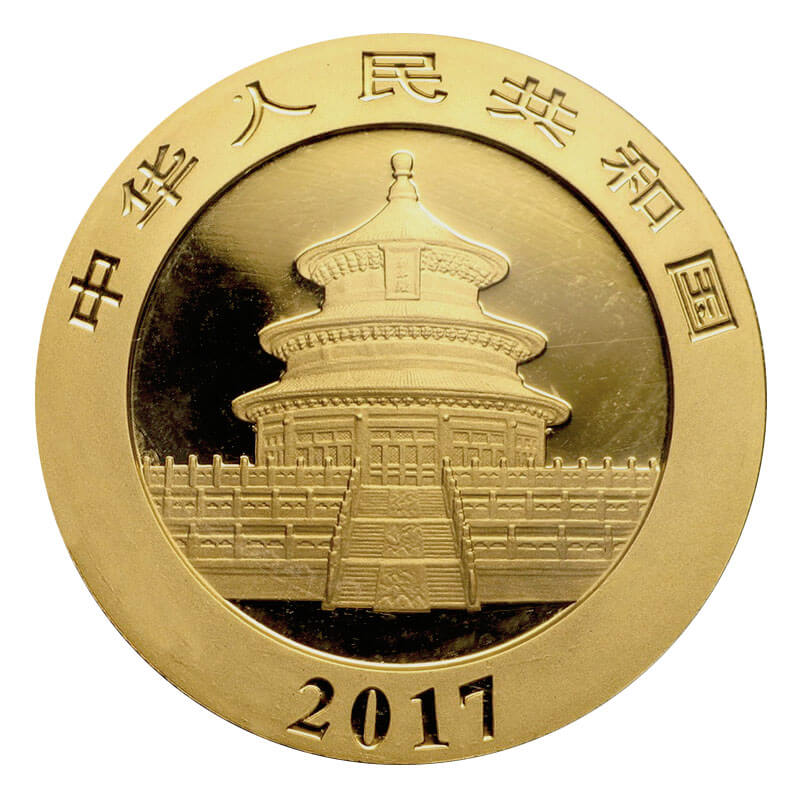 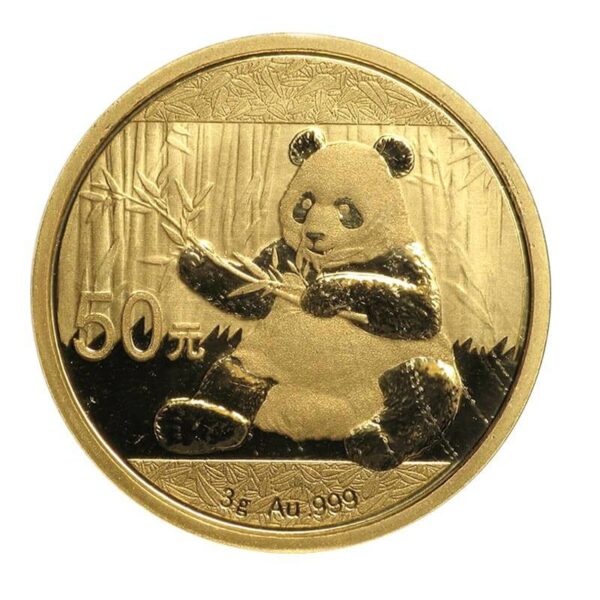 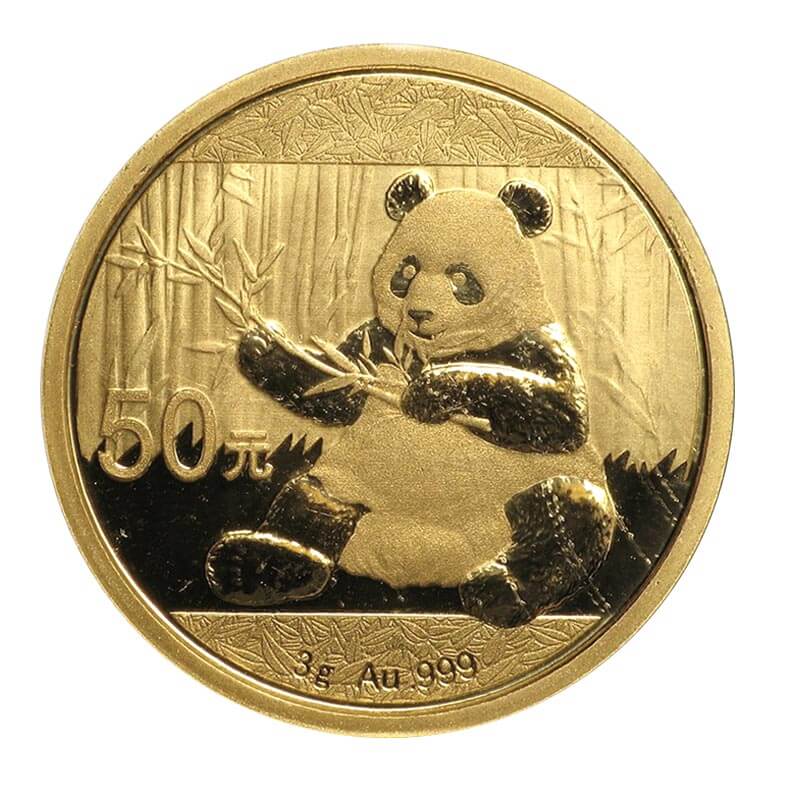 Add some personality to your gold holdings with the 2017 Chinese Gold Panda. The Chinese Gold Panda series has quickly become a favorite among gold owners for its beloved depiction and pure gold content. Each coin contains 3 grams (0.09645 troy oz) of .999 pure gold and is certified near-perfect PCGS MS-69 with a coveted “First Strike” label.

Gold owners have “bear-ly” been able to contain themselves for Chinese Gold Panda Coins since they were initially released by The People’s Republic of China in 1982. Composed of 3 grams (0.09645 troy oz) of .999 pure gold, this authorized legal tender coin carries a denomination of 50 yuan. Their outstanding condition, coupled with the fact that these Chinese Gold Panda Coins are designated with the prestigious First Strike label from PCGS, make them compelling gold coins for any precious metals portfolio.

Each Gold Panda Coin boasts qualities attractive to not only new precious metal buyers — such as 3 grams of .999 pure gold — but to serious gold enthusiasts, as well.

Each gold coin is designated with the prestigious First Strike label from Professional Coin Grading Service (PCGS) and is available in near-perfect Mint State 69 condition.

A 2017 First Strike coin from PCGS designates coins issued in the first 30 days of the mint’s release for that year. The First Strike distinction on a coin means it is from among the coin’s earliest production runs.

The “MS” in MS-69 stands for “Mint State.” This is a coveted condition only awarded to coins that are in impeccable condition. In the coin world, “MS-69” identifies coins in absolutely amazing condition. They are virtually fully struck and may have only minuscule imperfections when closely inspected. MS-69 coins are U.S. Money Reserve's specialty!

Even though China’s minting history dates back thousands of years, it’s shrouded in political strife, power struggles, and a historical timeline that can be difficult to decipher. Here’s what we do know: the Shenyang Mint (where the Chinese Gold Panda is produced) is one of three official minting facilities owned by the state-run China Banknote Printing and Minting Corporation.

China’s Shenyang Mint isn’t known for minting a wide variety of coins, but its collection of Chinese Gold Panda Coins is famous around the world. The Chinese Gold Panda Coin has been compared to the Canadian Gold Maple Leaf Coin and American Gold Eagle Coin. The Gold Panda was first produced in 1982 and carries the unique honor of depicting a different panda design every year.

In 2016, China caused a stir in the coin world when it began minting coins in metric weights, not troy ounces. That makes the 2017 edition of the Gold Panda only the second in the metric run.

A carefully rendered and notably detailed image of The Hall of Prayer for Good Harvests appears on the coin’s obverse. The Hall is part of the iconic Temple of Heaven, a place of worship in the center of Beijing. Above it reads “Zhonghua Renmin Gongheguo," meaning People's Republic of China. The year of issue (“2017”) appears below it.

With an image of its namesake animal seated before a bamboo forest adorning the reverse side, it’s easy to understand why gold buyers and coin enthusiasts alike appreciate the personality this piece adds to their portfolio. The reverse also bears the denomination, weight, and fineness.

Certified coins are evaluated and graded for their condition and rarity by a third-party grading service—in this case, the Professional Coin Grading Service (PCGS). The higher the grade, the more perfect the coin. Call U.S. Money Reserve to learn more about certified coin prices. A U.S. Money Reserve Account Executive is available for you today with more information about pricing for the beautiful PCGS MS-69 Chinese Gold Panda Coin.

2017 Chinese Gold Pandas are available online or over the phone courtesy of U.S. Money Reserve. The coins’ pureness means they may be a great addition to your precious metals strategy, and their resilience means they’re an outstanding choice for international coin enthusiasts to gift or display. Contact us today about your interest in 2017 China 50 Yuan Gold Panda MS-69 Coins.