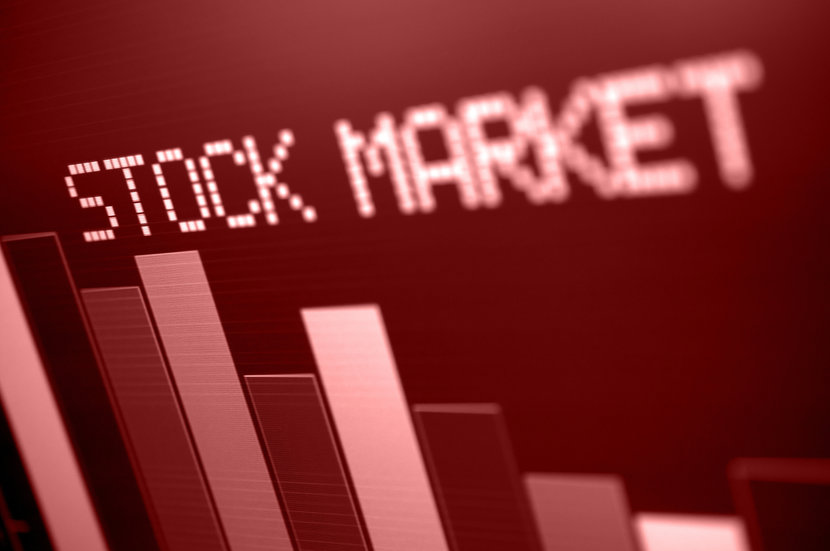 Is the Red-Hot Stock Market Too Hot?

There's no denying it. The stock market has been on a roll. The S&P's index has risen more than six percent since New Year's Day, nearly 20 percent in the last 12 months, and roughly 250 percent since the start of the bull market in March 2009, reports The New York Times. If you've been in the market for a while, you could very well be sitting atop a nice pile of red-hot profits—profits that could go up in flames. According to strategists, the market can't stay hot for much longer.

The market may be due for a harsh correction, claims John Hussman, president of Hussman Investment Trust and Stanford University economics PhD. Hussman argues “the S&P 500 to return no more than 1 percent on average over the next decade. Sooner than that…the stock market may plunge as much as 60 percent.”

So, is it time to move to safer ground? Dangerously high price-to-earnings ratios and foreboding historical trends could be sending smoke signals that the worst is on its way. Read on to gain greater insight into what's happening in the stock market and how buying gold could help you weather the potentially turbulent conditions ahead.

Understanding price-to-earnings ratios is foundational to understanding why so many economists and financial advisors anticipate trouble for the stock market.

A price-to-earnings ratio, or P/E ratio, is used to evaluate the fairness of a stock price. It compares the market price of a company's share against the company's actual earnings. You can calculate a company's P/E ratio by dividing the share price of a stock by the earnings per share.

For example, Coca-Cola Co (KO) traded at $42.24 per share on March 17, 2017. Their diluted earnings per share for the trailing twelve months (TTM) ended Dec. 2016 at $1.49. To calculate their P/E ratio, we divide the share price by the earnings per share. Thus, Coca-Cola’s P/E ratio for March 17 is about 28. This suggests that people are willing to pay $28 for every $1 of earnings that Coca Cola generates.

In general, a higher P/E can indicate that a stock is overvalued. Individual stocks have P/E ratios, as does the overall S&P 500.

So, what about current price-to-earnings ratios is worrying strategists?

The current environment is “the most broadly overvalued moment in market history,” argues Hussman. He correctly predicted the tech crash of 2000 and warns of something similar on the horizon. Per his analysis, the market is as overvalued as it was back in 2007, and just 5 percent away from its sky-high valuations right before the peak in 2000. But here's the real kicker.

“There are far more companies these days [whose] shares trade at much higher-than-normal valuations,” says Hussman, and accordingly, the risks of “the stock market right now are much more widespread and scary than they were in the past.”

Market watchers have also been keeping an eye on the CAPE ratio, another valuation measure that's risen to an ominously high level. CAPE is the “cyclically adjusted price-earnings” ratio. Divide the S&P 500 by the average of 10 years’ worth of earnings and you have the CAPE ratio. The regular P/E ratio looks at earnings per share over the last 12 months, whereas CAPE is calculated based on average earnings per share over the last 10 years. Many argue that this ratio provides a much more reliable read on the stock market.

How high has the CAPE ratio risen? “The cyclically adjusted price-to-earnings…has reached 30 for only the third time since 1881…the other two occasions were just before the Great Crash in 1929 and in the run-up to the dot-com crash in 2000,” reports Bloomberg. The two times the CAPE ratio reached these levels, “doom followed in the stock market,” adds asset manager Ben Carlson.

Could the stock market be “running up” to a meltdown, just like before? P/E ratios may be pointing in that direction.

The potential for long-term returns may be slim

Even if a meltdown doesn’t arrive as soon as expected, sticking around the stock market could prove lackluster in the long run.

Here's another instance where understanding the CAPE ratio is useful. The chart below shows the intersection of each monthly CAPE ratio since 1881 and the S&P 500's subsequent 10-year annual return. 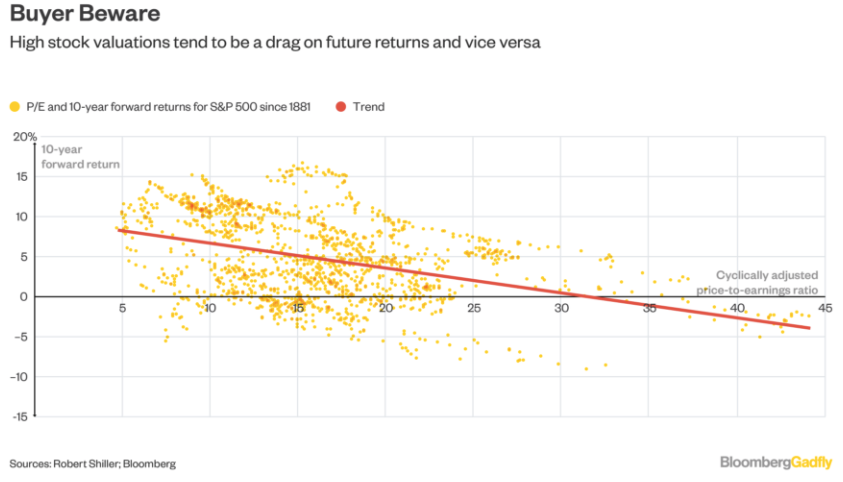 The trend isn't perfect, but it's clear: as valuations rise, the probability of high returns diminishes. Eventually, you're looking at low to negative returns. A CAPE ratio of 30 or greater—where we are now—has historically been followed by low, single-digit or negative 10-year annual returns, suggests Bloomberg.

“Returns in the next decade are likely to be very disappointing (think under 5% a year, instead of the 10% a year historical average),” according to Jack Bogle, founder of Vanguard, via CNN Money.

Strategists further “project the Standard & Poor's 500-stock index will gain 4 percent on average in 2017—the lowest expected annual gain for the stock market since 2005,” reports the Bespoke Investment Group via The Washington Post.

The outlook for gold prices, on the other hand, looks much brighter. Financial consulting firm INTL FCStone forecasts gold to hit $1,400.

Already, gold has “advanced close to 9 percent, cracking the $1,260 an ounce ceiling [in the second week of March]. Compared to the same number of trading days last year, gold was up 15 percent,” observes Forbes contributor and financial advisor, Frank Holmes.

“It is surely wise to make sure, after a remarkable run in the stock market, that you will be able to handle a sharp downturn when it eventually comes,” says The New York Times' Jeff Sommer. Do you know how you'd handle it? Transferring your money into government-issued gold coins with U.S. Money Reserve is a smart and secure way to protect your assets. Sign up to receive U.S. Money Reserve's Free Gold Information Kit to see how precious metals ownership can help protect the wealth you've worked so hard to build.

“Over the past 10 years, gold has shown little to no correlation with blue-chip or small-cap stocks, making it an exceptional diversifier for [those] who might fear stocks have risen too much, too fast, and are due for a pullback,” says financial advisor Frank Holmes.

Gold futures and the stock market generally have an average negative correlation of minus 0.06, reports MarketWatch. A positive reading of 1.0 would mean that the two assets move in absolute unison, up or down. A reading of minus 1.0 would mean that they have a perfectly inverse relationship. As you can see in the chart below, gold has predominately had a negative correlation to the stock market over the last three decades (orange emphasis, added). In general, gold prices have risen when stocks have tumbled. 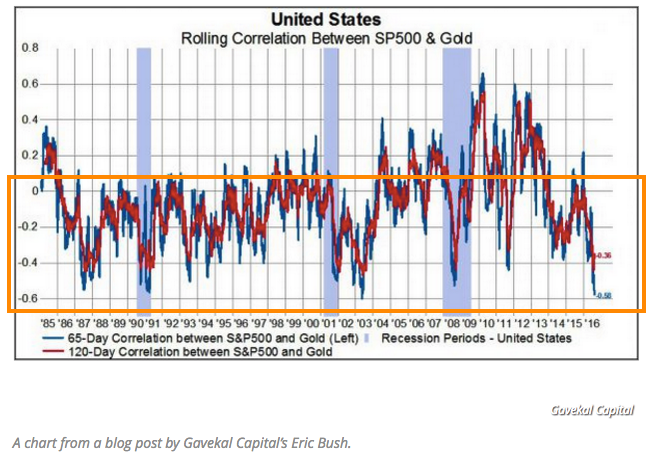 And a tumble may not be far off. “Stocks have now gone eight years without a bear market—a drop of 20 percent or more,” which is much longer than usual and “a red flag warning that the market is due for a dip,” reports Fortune. No bull market has ever made it to its 10th birthday, and this one stands at eight years old as of March 9, 2017.

Prepare for the worst with gold

The truth is, “most of us aren't steady stock traders, and need to be prepared for downturns in other ways,” says stock market researcher Laszlo Birinyi via The New York Times. “If little is accomplished in Washington to fulfill investor expectations—or if there is an external shock, such as an international crisis—the market could fall sharply…if the economy falters in such situations, the long rally in stocks could end violently.”

Thankfully, “gold is good in any scenario,” reports Business Insider. Unlike the stock market, precious metals have been a store of wealth and means of diversification for centuries. As hot as the stock market is, it could be time to cool off with gold. Call 1-844-307-1589 to speak with an experienced U.S. Money Reserve Account Executive to learn more about how gold can work to safeguard your assets from stock market volatility, act as a hedge against economic uncertainty, and build a foundation for diversification.