A Quick Guide to 7 of the Most Important U.S. Coinage Acts

Home » Coins » A Quick Guide to 7 of the Most Important U.S. Coinage Acts 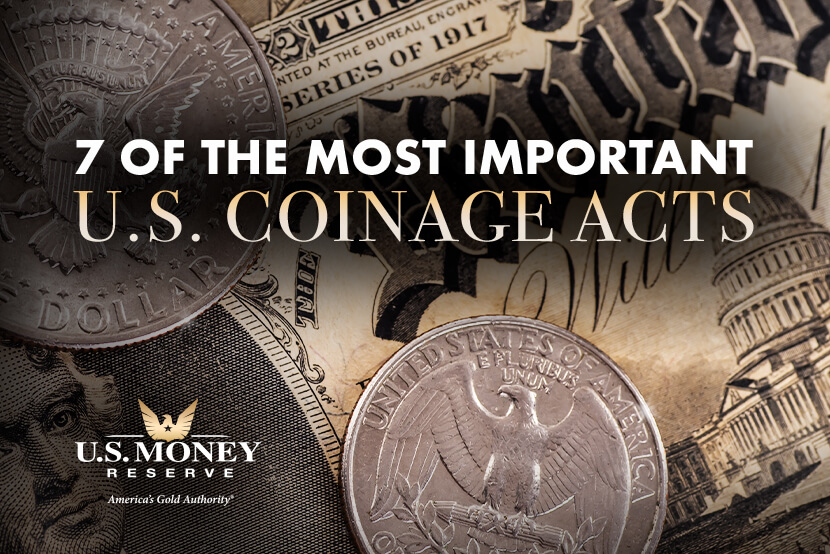 Ever wonder why our nation’s coins proclaim, “In God We Trust”? Or what prompted the creation of the U.S. Mint?

American history is punctuated by critical pieces of overlooked legislation that shaped and continue to shape gold coins, silver coins, and circulating coins as we know them. Here, we break down seven of America’s most important coinage acts and offer insights from the 38th Director of the United States Mint Edmund C. Moy, who served from 2006 to 2011.

The Coinage Act of 1792, also known as the Mint Act or Coinage Act, authorized the U.S. Mint and established regulation of coins.

“The importance of the roles of the United States Mint are clearly laid out in the law,” says Moy. The Mint’s “most important role is to make enough circulating coinage to facilitate economic transactions in our nation. The second most important role is to make enough precious metal bullion coins to meet demand. If the United States Mint has any leftover capacity, then it can make numismatic coins.”

The law specified that coins be minted with gold, silver, and copper in these denominations:

The law also defined the dollar relative to silver, not gold.

With the passage of the Coinage Act of 1834, a shift away from using silver in circulating coinage began.

Under this act, lawmakers adjusted the silver-to-gold ratio from 15:1 to 16:1, thereby reducing the gold content of the dollar. Generally speaking, the ratio defines the amount of silver it would take to purchase one ounce of gold. The lawmakers’ action significantly diminished the role of silver and paved the way for the gold standard.

Mostly in response to the California Gold Rush, the Coinage Act of 1849 authorized the minting of two new gold coins—a small $1 coin and the $20 Double Eagle.

The Coinage Act of 1857 put a stop to the use of foreign coins as legal tender in the U.S. and halted production of the unpopular half-cent coin. It also reduced the copper content of the penny to 88 percent and filled the 12-percent gap with nickel, making the coin lighter and giving it a silver-ish appearance.

Interestingly, Moy has said that if he were to pass his own coinage act, he “would have Congress delegate more autonomy to the U.S. Mint to change the metal content in our coins, to change our designs, and to have more flexibility for new coin programs.”

The Coinage Act of 1864 changed the composition of the one-cent coin and authorized the two-cent coin. From a historical perspective, the more important development was the birth of the phrase “In God We Trust” on U.S. coins. At the suggestion of U.S. Treasury Secretary Salmon P. Chase, the phrase first showed up on the 1864 two-cent coin. Many other coins subsequently were inscribed with “In God We Trust.”

The Coinage Act of 1873, also known as the Mint Act of 1873 or the Fourth Coinage Act, was designed primarily to enact operational changes at the Mint. However, the act wound up becoming known more for its call to move to the gold standard and away from silver.

“Once the bill passed, it was not until the miners took their silver bullion to be minted and were turned away that the public was truly aware of the power and the ramifications of the new bill. Silver had been demonetized,” the U.S. Mint reports.

This provision triggered a drop in silver prices and led some critics to refer to the act as the “Crime of 1873.” Eventually, the Mint halted silver production, and banks frowned on customers’ use of silver dollars.

In the 1960s, the U.S coped with a declining supply of silver, threatening to push up the demand for certain circulating coins—namely the dime and quarter—that contained silver. Some people even resorted to hoarding these coins.

Today, “U.S. silver coins [remain] very popular because they are very affordable to the average citizen,” explains Moy. “If someone can’t afford to own physical gold, they can usually afford to own silver. And owners of physical gold like diversifying into silver because the upside can be greater. A small change in silver price can be a relatively large swing in percentage.”

Moy would like readers to know, too, that “the United States Mint is required by law to not lose money. As a result, the U.S. Mint budgets to make a small profit to offset any potential losses from underperforming product lines, cost of goods fluctuations, and any unknowns. Whatever is left over at the end of the year is turned over to the United States Treasury’s general fund, which goes to pay down the federal government’s annual expenditures. The U.S. Mint is one of the few parts of our federal government that has been a net positive for the taxpayers.”

These coinage acts changed the face of American coinage, sometimes literally. Does the future hold more coinage acts? It might! Act now to change the face of your portfolio with physical gold and silver. Call 1-844-307-1589 today to speak with a knowledgeable Account Executive.