Can Gold Be Used as Money? 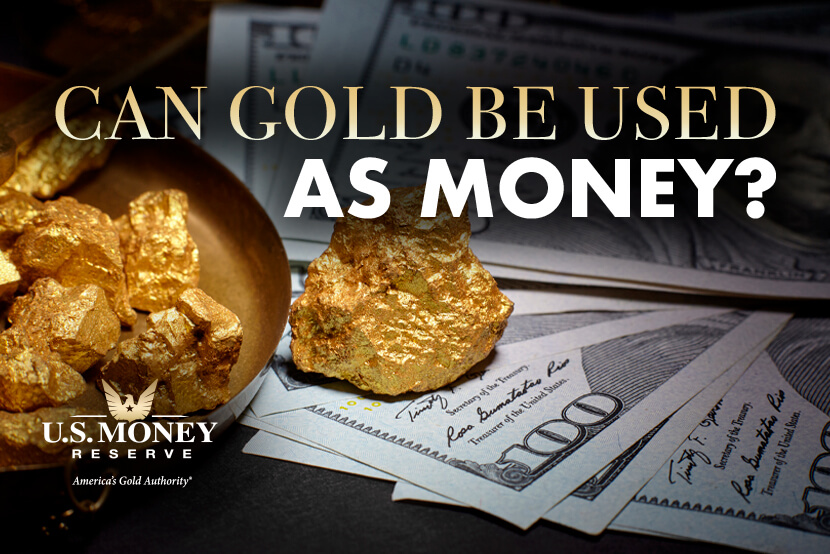 Some people think of gold as treasure. For others, it’s a financial haven. But is gold money? Yes and no. The answer is complicated.

Follow along as we revisit the history of gold as currency and weigh the characteristics of gold that make it similar to money (and those that make it different).

Gold can be bought and stored, but it’s typically not used as a payment method like cash, according to Investopedia. However, it can be converted to cash in almost any currency.

“You cannot easily buy something with a bag or bar of gold, not even with a gold coin. There are not many people in the world who will take gold for payment,” Business Insider reports.

That said, some U.S. states are changing their perspective on gold as money. Arizona, Idaho, Texas, Utah, Wyoming, Tennessee, Kansas, and Louisiana have all taken legislative steps to help residents secure their paper money with gold and silver. The general concept is known as “sound money.” In many of these states, legislation has been passed that ends income and/or sales taxes on precious metals.

What Is Gold’s Monetary History?

As the World Gold Council explains, gold has always been a vital component of the international monetary system.

King Croesus of Lydia (now part of Turkey) first ordered the minting of gold coins around 550 B.C. The coins circulated as currency in many countries before paper money emerged, the World Gold Council notes. Once paper money was introduced, various currencies kept their ties to gold, and the paper currency could be exchanged for gold.

What Is the Gold Standard?

While gold can’t be “spent” like traditional currency, the precious metal does have a longtime connection to the U.S. dollar.

Under the gold standard, a country connects the value of its currency to a certain amount of gold. Starting in 1879, Americans could exchange $20.67 in currency for one ounce of gold.

But in 1933, President Franklin D. Roosevelt and federal lawmakers effectively removed the U.S. from the gold standard, requiring people to trade gold coins and gold certificates in denominations exceeding $100 for other types of money, according to History.com.

Although Americans had been prohibited from owning gold or redeeming gold certificates for gold coins since the FDR era, foreign governments could still exchange dollars for gold, the Mises Institute reports. President Richard Nixon put a halt to that practice in 1971. Nixon’s action closed the so-called “gold window,” meaning gold was no longer linked to the U.S. dollar.

Today, no country backs its currency with gold. That means no paper money has a value that’s directly linked to gold, and no quantity of gold can regulate or impact the production of currency.

“Diversification and a desire for safe, liquid assets were…the main drivers of the purchases,” notes the Council. So even though countries may no longer formally back their currencies with physical gold, they still see the benefit in holding gold to help manage the economic risks associated with traditional currency.

How Does Gold Compare to Traditional Money?

Gold is technically money when it is a coin because a gold coin carries a legal-tender face value. However, you’d find it nearly impossible to spend that coin at the grocery store; the same holds true for other forms of gold.

Fiat currencies, like the U.S. dollar, are legal tender backed by the government that issues them. And as noted by CNBC, their value is not related to any “objective standard” like gold.

“That means central banks can print as much money as they want,” CNBC notes. “If an economy is struggling, injecting more notes into the system juices activity but lowers the value of the currency in question.”

Because a finite amount of gold is available, gold isn’t likely to ever go unsupported. In fact, gold has retained a steady purchasing power over time, whereas fiat currencies can’t make the same claim.

Gold isn’t a traditional asset, let alone a traditional “currency.” That’s one reason it can be such a powerful force in your portfolio. Call 1-844-307-1589 today to discuss adding gold to your financial plans.