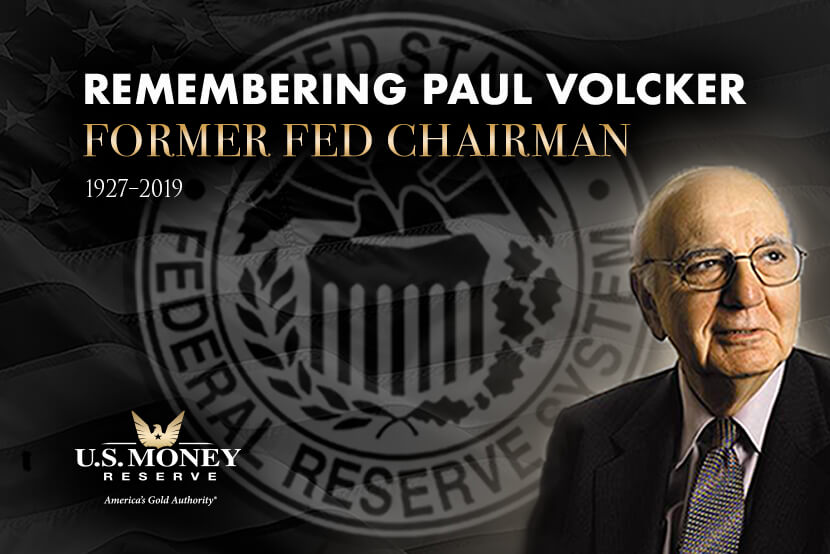 Paul Volcker: Remembering the Man Who Pressed the U.S. to Drop the Gold Standard

Paul Volcker racked up many milestones as chairman of the Federal Reserve from 1979 to 1987. Most notably, he sought to reverse the inflationary slide of the U.S. by pushing for higher interest rates.

Following Volcker’s death on December 8, 2019, because of complications from prostate cancer, The Washington Post noted that the 92-year-old “left as deep an imprint on the U.S. economy and financial system as has anyone of his generation.”

In honor of Volcker, we recount and remember the important ways he helped shape the economic landscape as we know it.

Even before he assumed the Fed chairmanship, Paul Volcker played a critical role in the gold market. Volcker, then an official at the U.S. Treasury Department, firmly recommended in 1971 that President Richard Nixon remove the U.S. from the gold standard, The Post’s obituary reports.

“In 1971, international investors were dumping dollars, pushing down their [appeal in] the global currency market, and throwing into question the longstanding practice of making dollars convertible to gold at a fixed rate,” relates The Post.

In response, Volcker and George Shultz, then a White House aide, trekked to the Oval Office to urge that Nixon immediately give up the gold standard. Following a powwow from August 13 to 15, 1971, at the Camp David presidential retreat, Nixon embraced Volcker’s advice, opting “to abandon what had been a bedrock of the global financial system,” according to The Post. Volcker and others insisted that “maintaining the dollar’s peg to the price of gold was an untenable policy.”

After Volcker’s death, Ed Conway, economics editor for the United Kingdom’s Sky News, wrote that eliminating the gold standard “was perhaps the single most important economic decision of the postwar era.”

“It brought an end to fixed exchange rates and ushered in a new era, where a government’s currency was worth what people thought it should be worth, rather than a certain weight of gold,” Conway wrote.

The Impact of Volcker’s “New Order”

So why the change in direction? The international financial system established at Bretton Woods, New Hampshire, at the tail end of World War II had crumbled, so Volcker “led the creation of a new order, in which the values of currencies would float freely against each other,” The Post reports. This new order demanded an exit from the gold standard.

“The dollar [was] at the center of the financial system, convertible into gold, with other countries having a fixed exchange rate against the dollar. That whole framework had come under great pressure, and it was clear that something had to be done,” Volcker recalled.

Volcker explained that amid an environment of continuing inflation, the U.S. had to grapple with the reality that the international monetary system had to be altered. One of the vehicles for doing that: suspension of the ability to convert U.S. dollars to gold.

“Foreign governments could no longer exchange their dollars for gold; in effect, the international monetary system turned into a fiat one,” according to a Federal Reserve history of this historic occasion.

The suspension, enacted by Nixon, soon led to the end of the Bretton Woods–designed monetary system.

Volcker ultimately credited Arthur Burns, then chairman of the Fed, with vigorously arguing for the abandonment of the gold standard. “It was not a permanent solution, in my mind, but it was a necessary transitional step,” Volcker recalled.

Volcker, who once referred to himself an enemy of gold, said he was surprised that Nixon and Secretary of the Treasury John Connally conveyed suspension of the gold standard as a “great triumph.”

Still, some critics remain displeased with Volcker’s advocacy for getting rid of the gold standard, in part because the U.S. economy continued to reel even after Nixon’s 1971 anti-inflationary moves.

Today, some politicians and analysts would like to see the U.S. return to the gold standard, though. “A gold standard is [one] avenue, among others, to restore our trust in government, by appropriately constraining the discretionary power of government,” the libertarian-oriented Cato Institute think tank has argued.