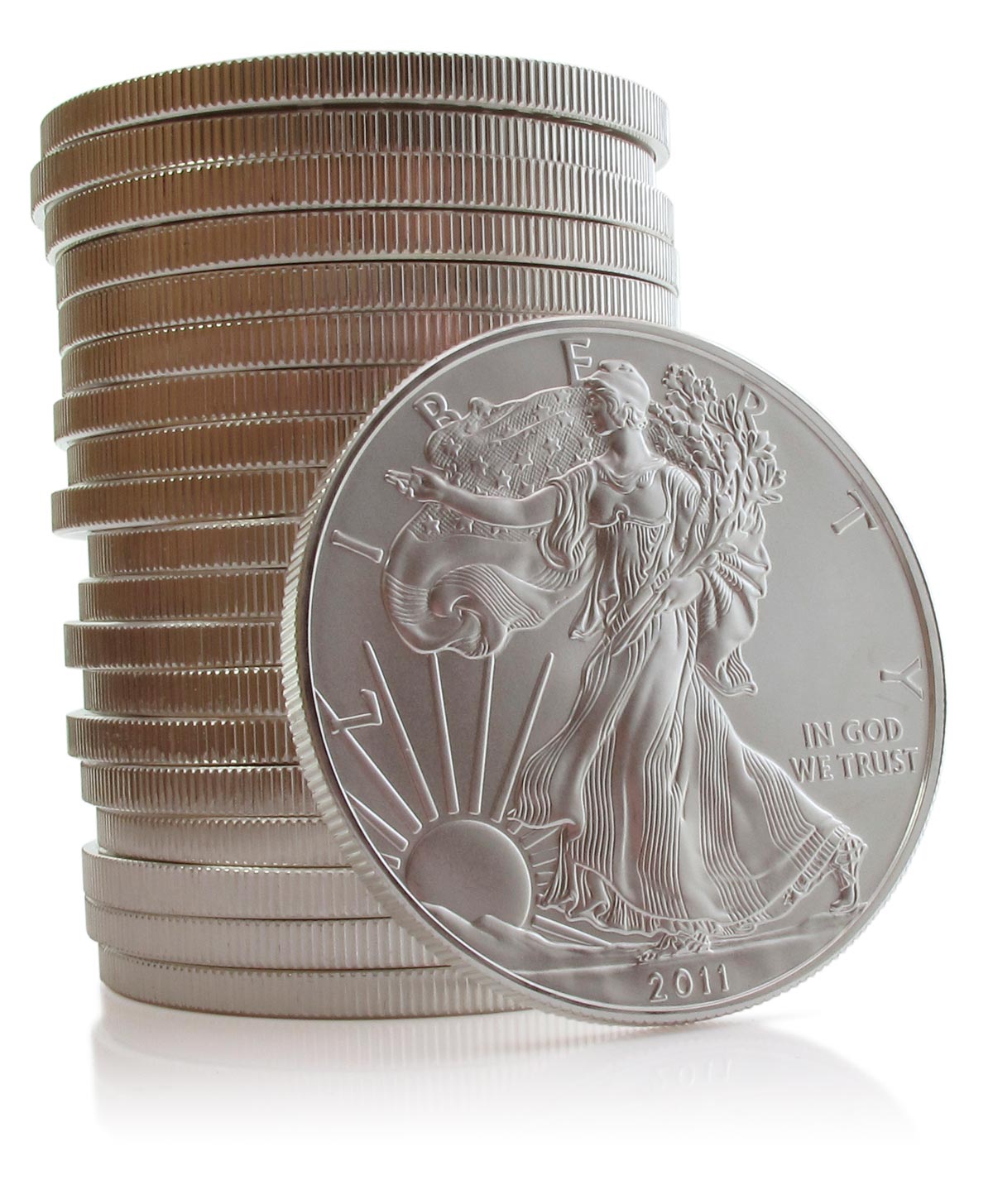 Congress authorized the Silver Eagle Coin Program in 1985 with the Liberty Coin Act. The first of these coins went on sale in 1986.

The obverse, or heads, side of the Silver Eagle is based on Adolph A. Weinman’s “Walking Liberty” half dollar, which the Mint produced from 1916 to 1947. It’s considered one of the most beautiful American coins ever minted.

In 2021, the Mint observed the 35th anniversary of the American Eagle program with a design update. Thanks to technological advancements in design and minting procedures, the Silver Eagle design now features some of Weinman’s original details that previously weren’t possible to put on the coins.

From 1986 to 2021, the coin’s reverse side showed a heraldic eagle with a shield, clenching an olive branch in the right talon and arrows in the left. The image, by John Mercanti, “symbolized strength and endurance,” the Mint explains.

In 2021, the reverse side of the coin was refreshed to show an eagle swooping in for a landing. The coin also features enhanced security.

Why You Should Consider Buying Silver Eagle Coins 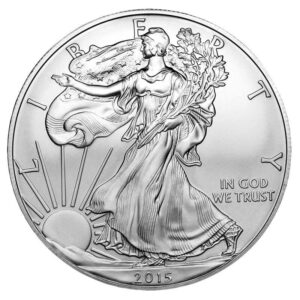 The 1 oz. Silver American Eagle coin is one of the world’s best-selling silver coins. Aside from being backed by the U.S. government, each Silver Eagle coin comes in a $1 denomination, making it an official U.S. legal tender coin. Also, Silver Eagles are among the few pure silver coins that exceed IRS requirements for IRA-approved precious metals. 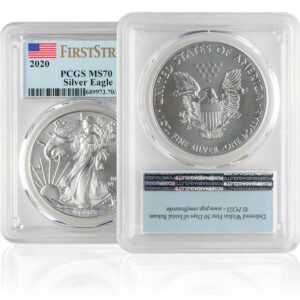 Struck from 1 oz. of 99.9% pure silver in the U.S. Mint in West Point, New York, the 2021 1 oz. Silver American Eagle PCGS MS70 First Strike earns a perfect grade of MS-70 from Professional Coin Grading Services (PCGS). The First Strike designation means the coin was issued within the first 30 days of the coin’s release. This authorized U.S. legal tender is sealed in a secure, PCGS-certified coin case. 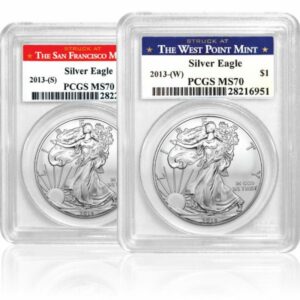 The 1 oz. Mint State Silver American Eagle Coin bears one of the most popular designs the U.S. Mint has ever produced since the coin’s initial release in 1986. Each coin is certified museum-quality MS-70 or near-perfect MS-69 by PCGS and is sealed in a PCGS-certified coin case. These coins are authorized U.S. legal tender.

The coin’s mint state designation refers to “the numerical grades MS-60 through MS-70, used to denote a business strike coin that never has been in circulation,” according to PCGS. 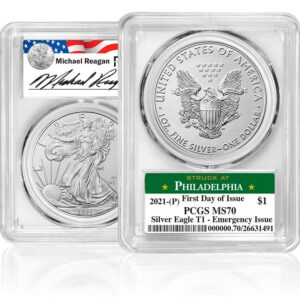 The 2021 3-Coin Silver American Eagle Reagan Legacy Set contains Silver Eagles from all three Mints, and the reverse features one of the final appearances of John Mercanti’s iconic eagle design. In addition, each coin is graded MS-70 and certified with a PCGS specialty label signed by an esteemed member of the Reagan family. 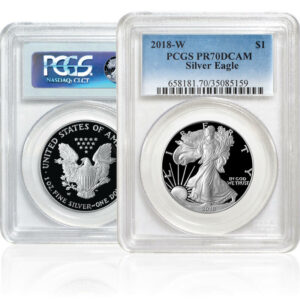 Produced by the U.S. Mint in West Point, New York, the 1 oz. Proof Silver American Eagle coin is one of the most recognizable silver coins in the world. With its mirror-like proof finish and 99.9% pure-silver content, each legal tender coin is certified museum-quality PR-70 or near-perfect PR-69 by PCGS. Each coin is sealed in a PCGS-certified case. 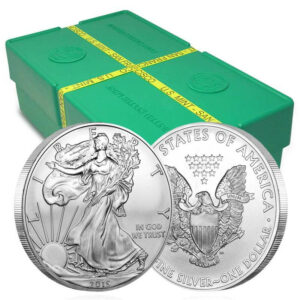 The Silver Eagle Monster Box contains 500 Silver American Eagle Coins. It’s an ideal way for someone wanting to hold a considerable amount of silver in their portfolio. Each 1 oz. coin is made of 99.9% pure silver and is authorized U.S. legal tender. Purchasing a Silver Eagle Monster Box is one of the fastest ways to increase your silver holdings. 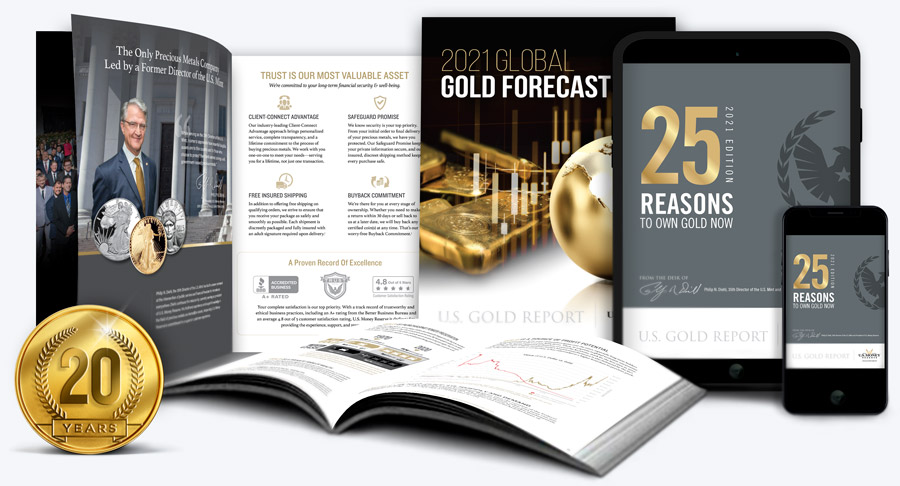