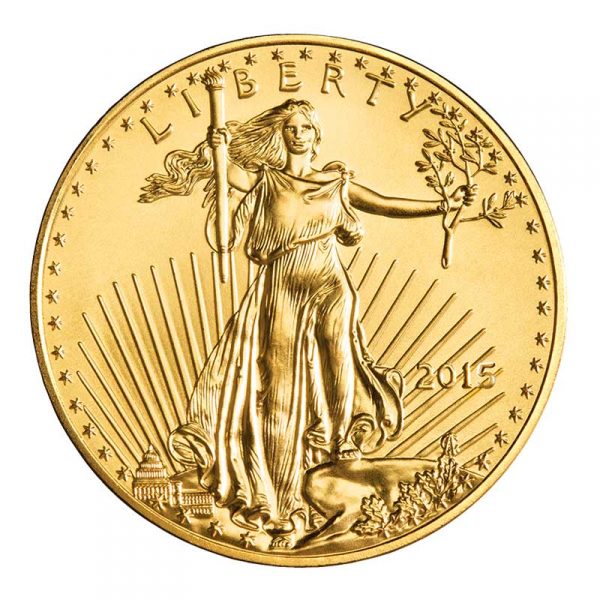 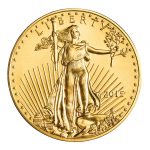 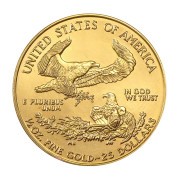 With an iconic design considered among the most beautiful ever struck, the Gold American Eagle Coin is the top-selling gold bullion coin in the United States. Designated official legal tender, the 1/2 oz. Gold American Eagle is backed by the U.S government for its gold content, weight and purity—making it a must-have addition to any gold owner’s portfolio.

In literal terms, the 1/2 oz. Gold American Eagle Coin is minted in 22-karat gold. In many ways, however, it’s more than that. It's more than a 1/2 oz. gold coin. It’s a symbol of our nation’s independence and strength, a representation of patriotism exhibited in the timeless artwork that graces each side of the coin.

This gold coin exemplifies “Made in America.” U.S. Congress authorizes this $25 Gold Eagle as legal tender, and the U.S. government backs its content, weight, and purity. The gold comes from here in America, and the U.S. Mint’s West Point facility handles the minting process.

The 1/2 oz. Gold American Eagle Coin is strikingly beautiful and historically significant, capable of serving either as part of a portfolio diversification strategy, a thoughtful patriotic gift, or both.

The 1/2 oz. Gold Eagle earns a place with precious metal owners and art enthusiasts alike thanks to the designs featured on either side, coupled with the coin's craftsmanship and the precision exhibited in its minting. And that’s to say nothing of this coin's remarkable gold purity or the role it can play in a precious metals portfolio or retirement strategy.

Today’s global economy, dependent as it is on the inner, and often unknown, workings of many different countries, almost requires a means of protection against potential economic volatility. The 1/2 oz. Gold American Eagle Coin can be that protection measure for you. It is a tangible form of wealth capable of serving as a readily available source of short-term personal finance protection.

A History of the 1/2 oz. Gold American Eagle Coin

The 1/2 oz. Gold American Eagle Coin is one of several that sprang to life following President Ronald Reagan’s signing of the Gold Bullion Act of 1985. The act stipulated that the U.S. Mint produce a family of 22-karat gold bullion coins in one-half, one-quarter, and one-tenth denominations. The following year saw their debut and the coin world hasn’t been the same since.

Sculptor Augustus Saint-Gaudens created the Lady Liberty design on this 1/2 oz. Gold American Eagle Coin in the early 1900s, for the $20 Double Eagle Gold Coin minted between 1907 and 1933. It brings to life Lady Liberty, her full figure featured as she raises in her right hand a torch and in her left hand an olive branch. We can see the Capitol Building behind her.

Ronald Reagan’s acceptance speech at the Republican National Convention in 1980 inspired sculptor Miley Busiek (now known as Miley Tucker-Frost) to create the family of bald eagles presented in bold relief on the coin’s reverse. A male eagle flies over a nest with an olive branch grasped in his talons. Below him is a female eagle, alert and protective in the nest. Her wings stretch around two eaglets in the nest with her.

When the coin was first released, Busiek told Coin News Today, “The spirit behind this design was to honor our family and America at a time when people need to be encouraged and affirmed—particularly our young people, with so much uncertainty clouding the future.”

The 1/2 oz. Gold Eagle is approved by the Internal Revenue Code for IRAs. That makes it a viable option for a Self-Directed IRA and a viable form of wealth insurance. A source of financial wealth for millennia, gold is one of the most reliable sources of peace of mind and financial security that can be paired with a retirement plan. U.S. Money Reserve's Gold Standard Precious Metals IRA program can help you secure retirement funds in a Self-Directed IRA.

How Much Do 1/2 oz. Gold American Eagle Coins Cost?

1/2 oz. Gold American Eagles are imprinted with their gold content and legal tender “face” value ($25). Several factors influence their pricing. As a bullion coin, a 1/2 oz. Gold Eagle's market value is tied almost entirely to its weight in gold and the current market price of gold. This makes it an ideal choice for liquid, short-term holding. The supply and demand for gold, plus local, national and global economic conditions, may also factor into pricing.

Where Can I Buy 1/2 oz. Gold American Eagle Coins?

1/2 oz. Gold American Eagle Coins are not available for purchase directly from the U.S. Mint. They are, however, available from U.S. Money Reserve, America's Gold Authority®, online or over the phone. Call now to place your order over the phone.

Our experienced and knowledgeable Account Executives are standing by to assist you with your order.

Cart
Have Us Call You!
Enter your name, phone and the time you wish to be called by one of our experienced professionals.