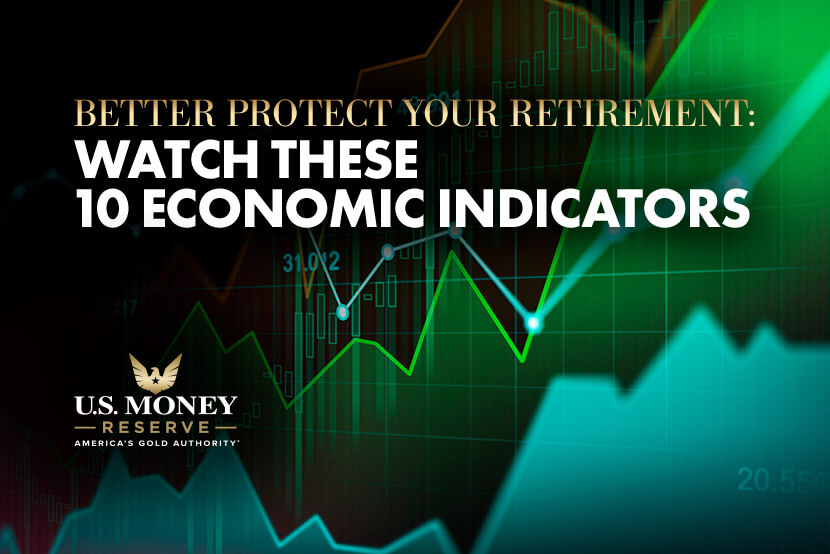 Watch These 10 Economic Indicators to Better Protect Your Retirement

What Are Economic Indicators?

People and businesses lean on economic indicators to help make decisions about financial matters, such as saving money versus buying assets.

Regarding retirement, financial services company Voya Financial says key economic indicators can give you clues about where you should head with your retirement strategies.

“Like a visit to the doctor’s office, they’ll alert you to the signs and symptoms of a changing economy—and help you decide how to react,” Voya explains.

Here are ten common economic indicators in the U.S. that you might want to watch.

Hint: One indicator in particular can greatly affect your retirement portfolio.

According to the Federal Reserve Bank of San Francisco, gross domestic product (GDP) is the “most comprehensive measure of overall economic performance.” GDP gauges the “output,” or total market value, of goods and services produced during a particular period of time. As of the second quarter of 2021, the GDP of the U.S. stood at more than $22.7 trillion.

Industrial output refers to the production of goods by economic sectors such as manufacturing and mining. As of August 2021, the industrial production index in the U.S. was nearly 101.6, compared with a little over 85.9 toward the tail end of the Great Recession. The higher the number, the better. A high number indicates a strengthening economy and strong demand for durable goods. The Federal Reserve publishes this index every month.

Consumer spending refers to the value of goods and services purchased by or for American consumers. The U.S. Bureau of Economic Analysis publishes monthly, quarterly, and annual data about consumer spending.

U.S. retail sales totaled $618.7 billion in August 2021, up 0.7% from the previous month, according to the Census Bureau. Because retail sales contribute so much to consumer spending, movement of retail sales up or down can signal that the economy is expanding or contracting.

Observers pay close attention to the sales of both new and existing homes to gauge how the economy is performing.

The Census Bureau reports that 708,000 new homes were sold nationwide in July 2021, down significantly from July 2020. According to the National Association of Realtors, nearly six million existing homes were sold in the U.S. in July 2021. That’s well above the levels seen in recent years.

The pace of home construction also offers insights into the health of the U.S. economy. In July 2021, builders started construction on just over 1.5 million homes in the U.S., the Census Bureau reports. For the most part, that’s well above the monthly activity seen in the past five years.

Yet another key economic indicator examines manufacturers’ shipments, inventories, and orders. The Census Bureau reports monthly figures for manufacturing demand. These numbers point to how much money businesses and consumers are spending on products.

When inflation goes up, it reduces your purchasing power. Economists measure inflation by monitoring the prices of an array of goods and services. As of August 2021, the U.S. inflation rate was 5.3%, compared with 1.4% in 2020.

Inflation can have a significant impact on your retirement. High inflation can eat into your buying power and weaken the purchasing power of your money, meaning the money you save now won’t go as far when you’re retired.

In fact, it’s worth noting that precious metals can be a hedge against inflation thanks to their long-term performance potential as a physical asset.

To further help protect your retirement from the damaging effects of inflation, consider:

Fine-tune your retirement portfolio decisions with help from economic indicators and an arsenal of information. Follow U.S. Money Reserve on Twitter and Facebook for up-to-date market insights and explanations about what’s happening in the world today.