What Could a Record-Breaking Gold-to-Silver Ratio Mean for You?

Home » Gold » What Could a Record-Breaking Gold-to-Silver Ratio Mean for You? 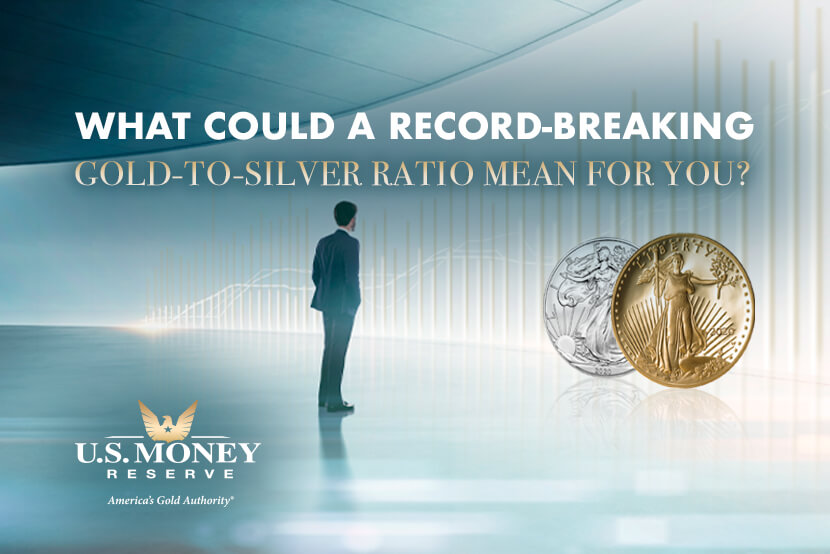 The gold-to-silver ratio is at a near-record high—higher than it has been in many years. How did it get there, and what does it mean for you? U.S. Money Reserve gives you insights and details to help you better understand how silver and gold prices are performing and what their performance could mean for you.

What Is the Gold-to-Silver Ratio?

By tracking the prices of the two precious metals, you can compute the ratio—simply divide the price of gold by the price of silver. Calculating the ratio can help you determine when to buy gold or silver and which metal to purchase.

In recent times, the ratio has risen steadily. In early May 2020, the ratio skyrocketed to around 115:1, down from a record high of 125:1 in March 2020. Based on the current ratio, silver is considered inexpensive relative to gold.

If the current rally in the gold-to-silver ratio is like the one in 2008, amid the Great Recession, a ratio of around 118:1 could be in the cards.

Why Is the Gold-to-Silver Ratio So High?

A number of factors have driven up the gold-to-silver ratio. Here are five of them:

Against this backdrop, a lot of people are seeking a safe haven for their assets and a hedge against financial risk, and many of them have turned to gold. Fast-paced gold demand has helped push up the price of gold and has triggered never-before-seen gold-to-silver ratios.

The Wall Street Journal further explains that the price of silver has not matched the recent spike in the price of gold because depressed industrial demand for silver has outweighed shifts in the gold market. In addition, recent mining shutdowns have hurt silver production.

What Does a High Gold-to-Silver Ratio Mean for You?

Keeping on top of the gold-to-silver ratio can help you identify a time you feel best about buying precious metals and whether to buy gold or silver.

Mickey Fulp, a certified geologist, says the gold-to-silver ratio “lends valuable guidance” when you’re trying to pinpoint how gold and silver are performing in the market in relation to one another. A ratio above 80:1 “is evidence that silver is severely undervalued and is a strong buy signal for the metal,” Kulp says.

Although silver functions mostly as an industrial metal, Kulp says, “It is strongly tied to the price of gold and is generally more [sensitive] during upside and downside moves of the yellow metal. In times of financial distress and economic calamity, silver tends to behave more like a precious metal with widespread [buying] of gold trickling down.”

Kulp does note, though, that gold serves as his “safe haven and insurance policy against financial calamity.”

One Seeking Alpha contributor, Oyat Advisors, writes that they traditionally include precious metals in their asset allocation, representing nearly 25% of liquid assets. Thus far, the financial management firm has focused solely on physical gold for its metals allocation, but now it’s looking at complementing physical gold with a small amount of physical silver.

In fact, despite the current high gold-to-silver ratio, some experts are optimistic about the long-term fundamentals of silver, particularly thanks to its various industrial uses.

In fact, Kitco contributor Phillip Streible believes that silver will shine as a “leader” and that the gold-to-silver ratio could decrease “because of an outpacing increase in silver prices.”

A: Typically, the ratio is impacted by what happens to gold more than silver. Factors that influence the ratio include:

Q: What Is a Good Gold-to-Silver Ratio?

When the ratio rises, the price of gold is higher, so you’d need more ounces of silver to buy one ounce of gold. A high ratio can mean that silver is a relative bargain buy. Therefore, it could be an excellent time to buy silver because the price is down. A lower ratio can mean the reverse: Gold might be more affordably priced, and you may want to buy gold while the price is relatively lower than it would be at a higher ratio.

Because the gold-to-silver ratio changes so often, it can be hard to make long-term decisions based solely on that number. Instead, consider using the ratio as one of the many data points you consider when buying gold or silver.

Q: Will Silver Ever Cost More Than Gold?

A: The price of silver tends to climb at a higher rate than gold prices.

Q: Why Is the Price of Silver So High?

A: This is a common question, but calling the price of silver “high” is subjective. As of November 24, 2020, the gold-to-silver ratio was about 77:1. That ratio is on the high side if you compare it to the last two decades, during which the ratio ranged from roughly 50:1 to 70:1.

“Silver…has a much higher industrial component to it…and in an environment where we see the global economy recovering, that’s another reason to buy silver,” Michael Hsueh, commodities and foreign exchange strategist at Deutsche Bank, told CNBC.

Track gold and silver prices with U.S. Money Reserve’s price charts any time of day or night. Then, when you feel like the time is right, make your move.