What Presidents Are on Coins and Why?

Home » Coins » What Presidents Are on Coins and Why? 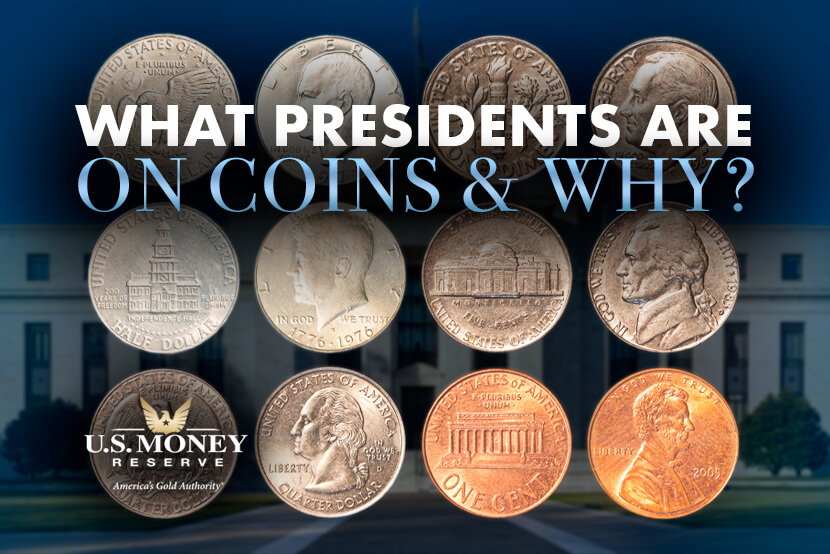 Abraham Lincoln appears on the penny, Thomas Jefferson is on the nickel, Franklin D. Roosevelt is featured on the dime, George Washington adorns the quarter-dollar, and John F. Kennedy is honored on the half-dollar. Ever wonder how certain presidents ended up being featured on American coins?

Learn about each president’s place in the history of American coinage and why each leader was chosen.

Abraham Lincoln on the Penny

The profile view of Abraham Lincoln first showed up on the front of the one-cent piece in 1909—nearly 120 years after the first U.S. penny was minted, and 44 years after he was assassinated. Lincoln served as our 16th president during the Civil War. He oversaw Union efforts to defeat the Confederacy, and he subsequently pushed for the abolition of slavery with the Emancipation Proclamation.

“A strong feeling had prevailed against using portraits on our coins, but public sentiment stemming from the 100th-anniversary celebration of Abraham Lincoln’s birth proved stronger than the long-standing prejudice,” the U.S. Treasury Department notes.

President Theodore Roosevelt commissioned sculptor Victor David Brenner to redesign the penny with Lincoln’s likeness on it. The coin was released to the public in August 1909.

Thomas Jefferson on the Nickel

The likeness of Thomas Jefferson, our third president and author of the Declaration of Independence, debuted on the country’s five-cent coin in 1938. This five-cent coin replaced the Buffalo nickel. The U.S. Mint issued the Jefferson nickel five years before the bicentennial of his birth.

The Treasury Department chose artist Felix Schlag to design the coin. According to History.com, Schlag based his left-facing profile of Jefferson in a period coat and wig on a marble bust sculpted by France’s Jean-Antoine Houdon. The back of the coin initially featured Jefferson’s Virginia home, Monticello.

As noted by the Thomas Jefferson Encyclopedia, the 1938 coin was not the first depiction of Jefferson on U.S. currency. In 1869, his likeness appeared on the $2 bill.

Franklin D. Roosevelt on the Dime

The likeness of Franklin D. Roosevelt, our 32nd president, replaced the image of Lady Liberty on the 10-cent coin in 1946. That was a year after FDR died.

The artist responsible for the image of FDR on the front of the dime remains a source of controversy. Some credit John Sinnock, the U.S. Mint’s chief engraver from 1925 to 1947. Others credit sculptor Selma Burke.

George Washington on the Quarter-Dollar

A portrait of George Washington, our first president, graces the front of the U.S. 25-cent coin. The U.S. Mint first produced the Washington quarter in 1932 to commemorate the 200th anniversary of his birth. According to CoinWeek, sculptor John Flanagan designed the iconic image of Washington.

Washington became president in 1789 after commanding the Continental Army during the Revolutionary War and presiding over the Constitutional Convention. The website for Mount Vernon, which was Washington’s Virginia estate, notes that the two-term president “played an essential part in shaping the role and function” of the presidency.

John F. Kennedy on the Half-Dollar

A coin representing John F. Kennedy, the 35th U.S. president, was conceived the day of his assassination, according to the National Museum of American History. JFK was shot to death on Nov. 22, 1963, while riding in a motorcade in Dallas.

Within hours of the assassination, Mint Director Eva Adams spoke with Chief Engraver Gilroy Roberts about depicting Kennedy on a coin, the museum reports. First Lady Jacqueline Kennedy chose the half-dollar for the denomination of the commemorative coin. Roberts designed the front of the coin, and Assistant Engraver Frank Gasparro designed the back.

The design change required Congress’s authorization, since law did not allow coinage designs to be changed more often than 25 years (and the current half-dollar was only 15 years old).

A little over a month after JFK’s death, Congress approved the Kennedy half-dollar to memorialize him with Public Law No, 88-253. The Kennedy coin was minted the following year in 1964.

In 1960, Kennedy became the youngest person ever elected president. He served less than three years. During that relatively short amount of time, JFK launched the Peace Corps, proposed comprehensive civil rights legislation, and challenged the U.S. to put astronauts on the moon.

His 1963 assassination “turned the all-too-human Kennedy into a larger-than-life heroic figure. To this day, historians continue to rank him among the best-loved presidents in American history,” History.com writes.

Ronald Reagan served two terms as president, from 1981 to 1989. Among the highlights of his White House tenure were bringing an end to the Cold War, enacting middle-class tax cuts, and bolstering the U.S. military.

“The eight years of the Reagan presidency was one of the most dynamic periods in recent U.S. history, resulting in a major refocusing of the nation’s social, business, and international agenda. Few presidents have enjoyed the affection of so many of the American people,” the Ronald Reagan Presidential Library & Museum notes.