Who Inspired the Indian Head on the Gold American Buffalo Coin?

Home » Coins » Who Inspired the Indian Head on the Gold American Buffalo Coin? 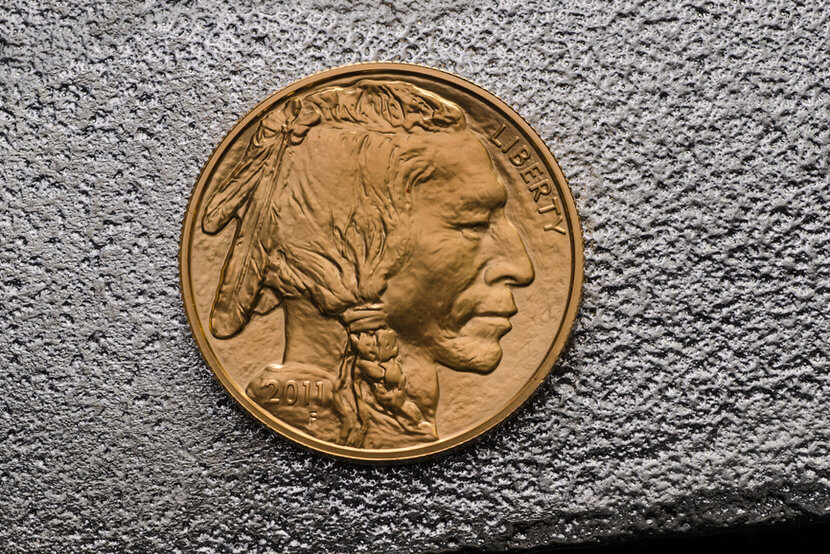 The Gold American Eagle depicts Lady Liberty, fearlessly gazing into America's future. The Canadian Gold Maple Leaf features the first portrait of Queen Elizabeth II to show her without a crown. The Gold American Buffalo features… who? The answer isn't as straightforward as you might think.

The front of the Gold American Buffalo shows a right-facing portrait of a Native American chief and warrior, an inscription of the year minted, and the word “LIBERTY.”

It's widely accepted that the portrait isn't inspired by one single Native American. Rather, the image is believed to be a composite of several men. But, who were these men and where did they come from? You're about to find out!

The Buffalo Nickel: The Source of the Gold Buffalo Design

The Gold Buffalo Coin design was first released on the Buffalo Nickel, or Indian Head Nickel. This copper nickel five-cent piece was designed by American sculptor James Earle Fraser and struck by the U.S. Mint from 1913 to 1938. The effort was part of the Mint's campaign to beautify American coinage.

The story behind the Buffalo Nickel design dates back much further, though, to the Battle of Little Bighorn in 1876. That’s when Thomas Fraser, the father of Buffalo Nickel artist James Earle Fraser, found himself among the men dispatched to claim the fallen soldiers of that armed engagement, referred to by many as Custer’s Last Stand. James Earle Fraser’s exposure to such frontier life in his early life influenced many of his works, including the designs he would do for the Buffalo Nickel.

Title II of this act announced the striking and issuing of $50 Gold American Buffalo bullion and proof coins, and marked the first time in history that the U.S. Mint produced a .9999 pure 24-karat gold coin. It set forth guidelines for the coin’s design, production volume, price, legal tender status, and gold sourcing. More specifically, it stipulated that Fraser’s designs for the Buffalo Nickel be used on the obverse and reverse of the Gold American Buffalo.

Title II of the act describes the coins:

“The initial designs of the obverse and reverse of the gold bullion coins struck under this subsection during the first year of issuance shall bear the original designs by James Earle Fraser, which appear on the five-cent coin commonly referred to as the ‘Buffalo Nickel’ or the ‘1913 Type 1.'”

So, the real question is, who's on the Buffalo Nickel?

When it comes to who's who on the Buffalo Nickel and Gold Buffalo, there are a variety of overlapping theories circulating around coin enthusiast blogs.

USA Coin Books writes that according to Fraser, the portrait on the Buffalo Nickel, and thereby the Gold Buffalo, is a composite of three different Native Americans: Chief Iron Tail of the Oglala Lakota, Chief Two Moons of the Cheyenne, and Chief John Big Tree of the Kiowa.

In this letter, Fraser told the Mint that he had done several portraits of Native Americans during his career, including Chief Iron Tail and Chief Two Moons.

Indian Country Today has corroborated this, writing, “Two Moons was one of the three Indians used as a model for the profile on the obverse face of the nickel. (Another was Iron Tail, Oglala Lakota; there is much debate about who the third Indian was.)”

To a degree, History.com also supports Indian Country Today. According to their research, for the front of the Buffalo Nickel, “Fraser sculpted the head of a Native American, which he said was a composite based on models that included Chief Iron Tail of the Lakota Sioux and Chief Two Moons of the Cheyenne.”

Given that Fraser was raised on the frontier and among the Sioux Indians and other Native Americans, there may have been additional unnamed Native Americans who modeled for him and influenced his final design. If Fraser's goal was to create a Native American portrait, but not associate the facial features with any specific tribe, he achieved his goal masterfully.

To date, Chief Iron Tail, Two Moons, and Big Tree are the only individuals who have been consistently and publicly associated with the Buffalo Nickel.

An Iconic Piece of American History

Whether the design on the Gold Buffalo is a composite of a real person or a creative combination of many, one thing is clear: The Gold American Buffalo Coin is an iconic piece of American history. It reflects a rich and often romantic part of our nation's past.

“These classic and beautiful American Indian and Buffalo designs by James Earle Fraser, which have been American favorites since they were first used in 1913, recall a golden age of coin artistry,” noted Deputy Director David A. Lebryk in a press release announcing the release of the Gold American Buffalo coin.

If you tried to buy this incredibly pure gold coin during one of these times, you simply couldn’t. A sellout or production halt could happen again. If it does, do you want to be one of the people clamoring for something you could’ve had earlier? Call 1-844-307-1589 to secure a Gold American Buffalo Coin for your portfolio today—before history repeats itself. Then take a look at its design. Who do you see pictured?