Back to Gold School: An A+ History of the Gold American Buffalo Coin

Home » Coins » Back to Gold School: An A+ History of the Gold American Buffalo Coin 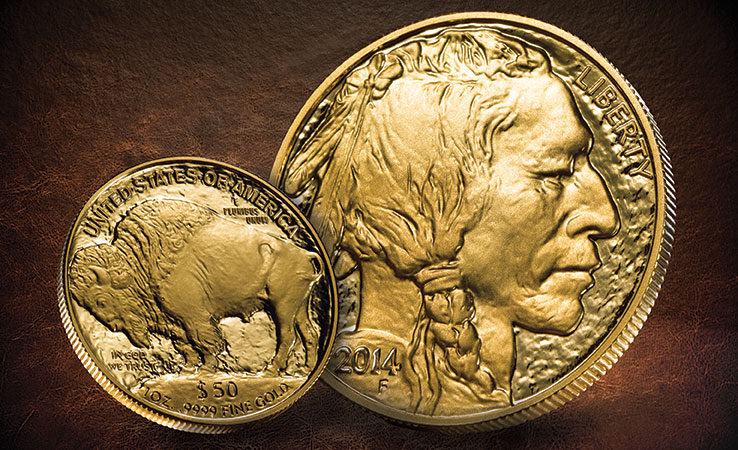 It's been called classic and beautiful, a coin that recalls “a golden age of coin artistry.” Meet the Gold American Buffalo Coin, one of the purest gold coins available and the nation's first-ever 24-karat gold coin. Hit the books and keep reading to learn how this coin made history and how its design honors America's legacy, plus how public demand for it has sky-rocketed over the years.

When was the Gold American Buffalo Coin first produced?

Gold American Buffalo Coins were first released to the public in June 2006 under Public Law 109-145, also called the Presidential $1 Coin Act of 2005. Title II of this act announced the striking and issuing of $50 Gold American Buffalo bullion and proof coins. It set forth guidelines for the coin's design, production volume, price, legal tender status, gold sourcing, and more.

As it pertains to Gold American Buffalo Coins, the Presidential $1 Coin Act:

This important piece of coin legislation marked the first time in history that the U.S. Mint produced a .9999 pure 24-karat gold coin. In part, the coins were created to keep pace with 24-karat bullion options from other countries, like the Canadian Gold Maple Leaf and the Chinese Gold Panda. 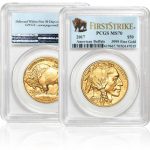 Few things in life are perfect, save the Proof Gold American Buffalo. It’s PCGS-certified a perfect condition of MS-70 with a coveted “First Strike” label, indicating that these coins were received by PCGS within the first 30 days of their initial release. With zero imperfections, Proof Gold American Buffalo Coins will enrich your portfolio in a whole new way. Order online or call 1-844-307-1589 to make perfection yours, but only while supplies last.

The obverse and reverse of Gold American Buffalo Coins bear “designs by James Earle Fraser, which originally appeared on the 5-cent coin commonly referred to as the ‘Buffalo nickel' or the ‘1913 Type 1,'” notes the Presidential $1 Coin Act. The Buffalo nickel was produced between 1913 and 1938 and became one of the nation's best-loved circulating coins.

“These classic and beautiful American Indian and Buffalo designs by James Earle Fraser, which have been American favorites since they were first used in 1913, recall a golden age of coin artistry,” noted Deputy Director David A. Lebryk in a press release announcing the coin. 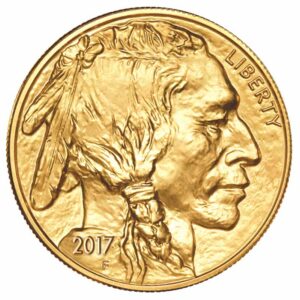 The front of the Gold American Buffalo Coin features a right-facing portrait of a Native American, an inscription of the year minted, and the word “LIBERTY.” The portrait is said to honor “the legacy of our land's first inhabitants,” writes the U.S. Mint.

The profile isn't of one single man. Rather, it's a composite of several Native American men, including Chief Two Moons of the Cheyenne and Chief Iron Tail of the Lakota Sioux. 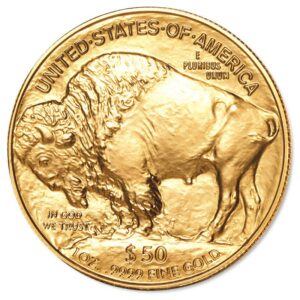 The back of the coin features a left-facing buffalo standing atop a rock or mound. His presence is all-encompassing and powerful, as his head and tail seem to press against the edges of the coin.

According to the U.S. Mint, the Buffalo “recalls the pioneering spirit of the Nation's westward expansion.”

Some believe that the buffalo is based on an American buffalo named Black Diamond who lived in New York's Central Park Zoo and was considered to be the largest buffalo in captivity. Fraser lived in New York for more than a decade. 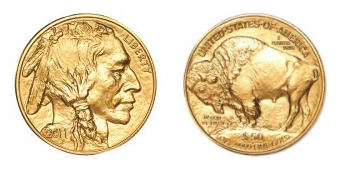 The Gold American Buffalo Bullion Coin is a one-of-a-kind masterpiece. It’s made from American gold, produced in an American mint, and backed by the U.S. government…all in addition to offering the security, liquidity, and protection of a world-class gold coin. Order online or call 1-844-307-1589 to buy yours today!

Where can I buy Gold American Buffalo Coins?

If you tried to buy this incredibly pure coin during one of these times, you simply couldn't. A sellout or production halt could happen again. If it does, do you want to be one of the people clamoring for something you could've had earlier? Call 1-844-307-1589 to secure a Gold American Buffalo Coin for your portfolio today—before history repeats itself.