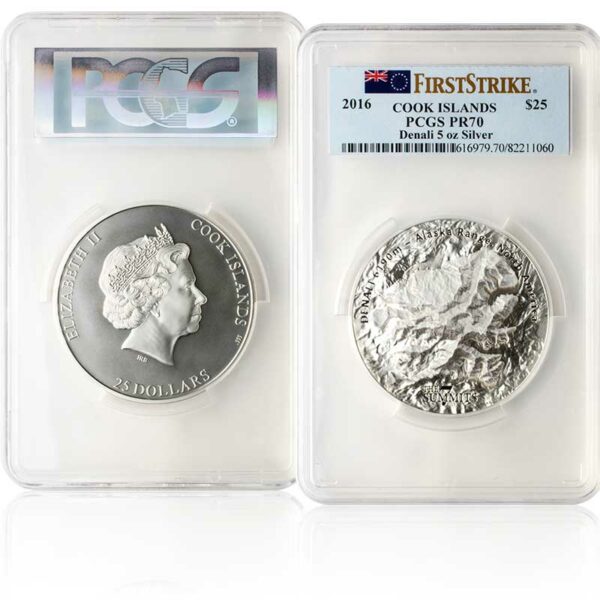 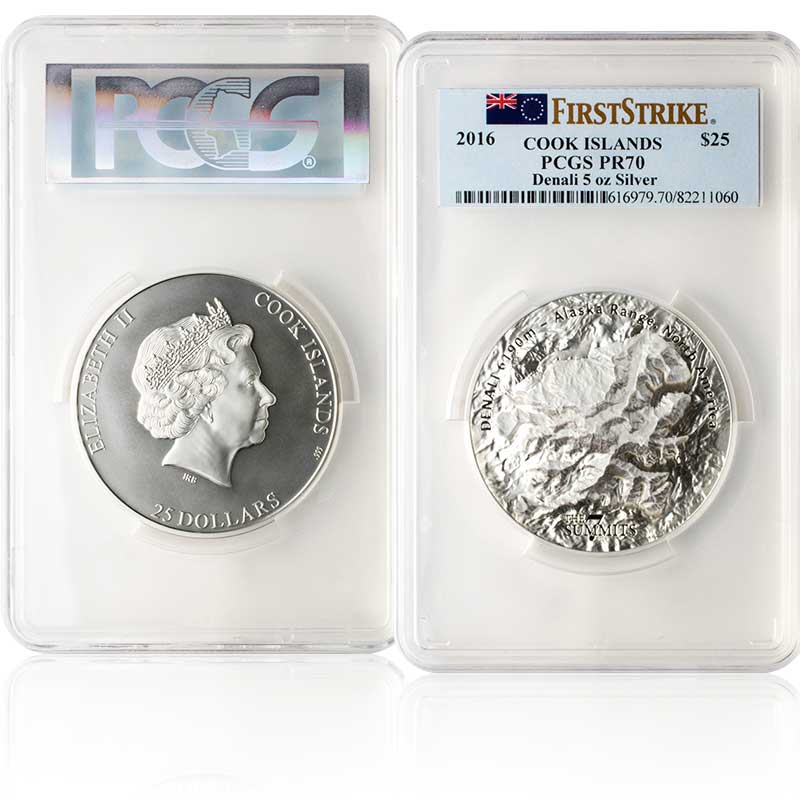 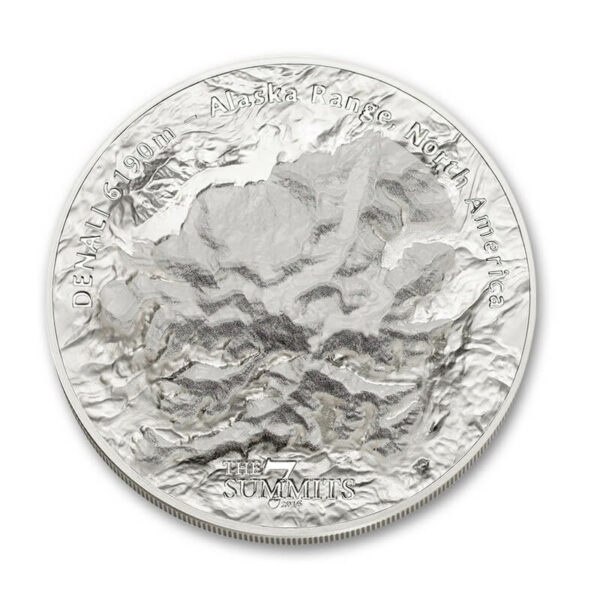 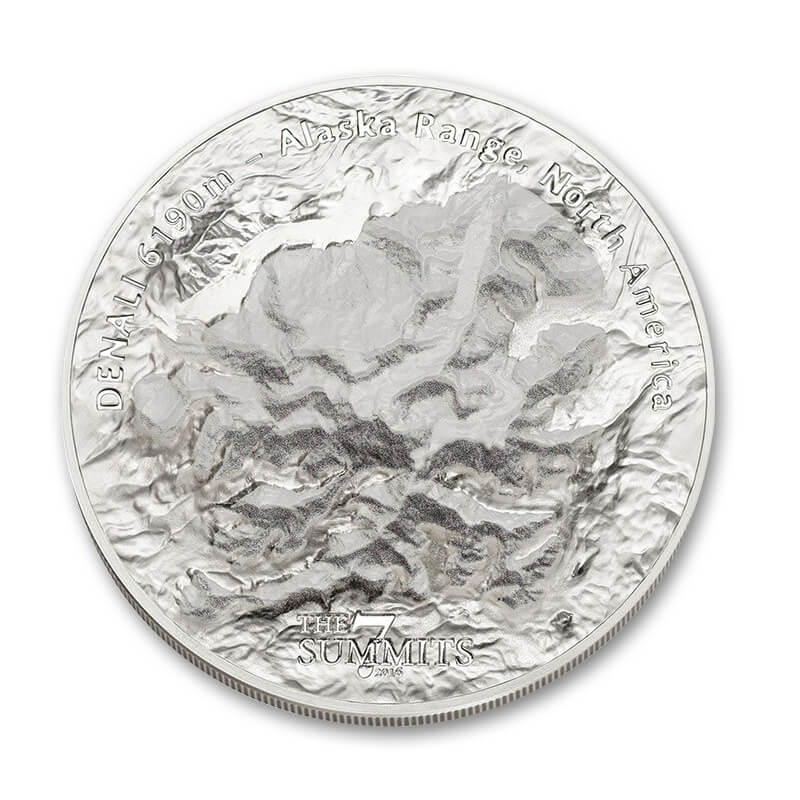 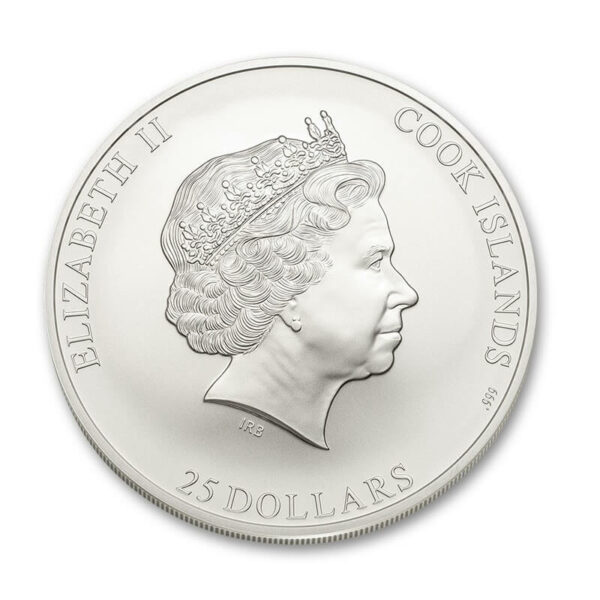 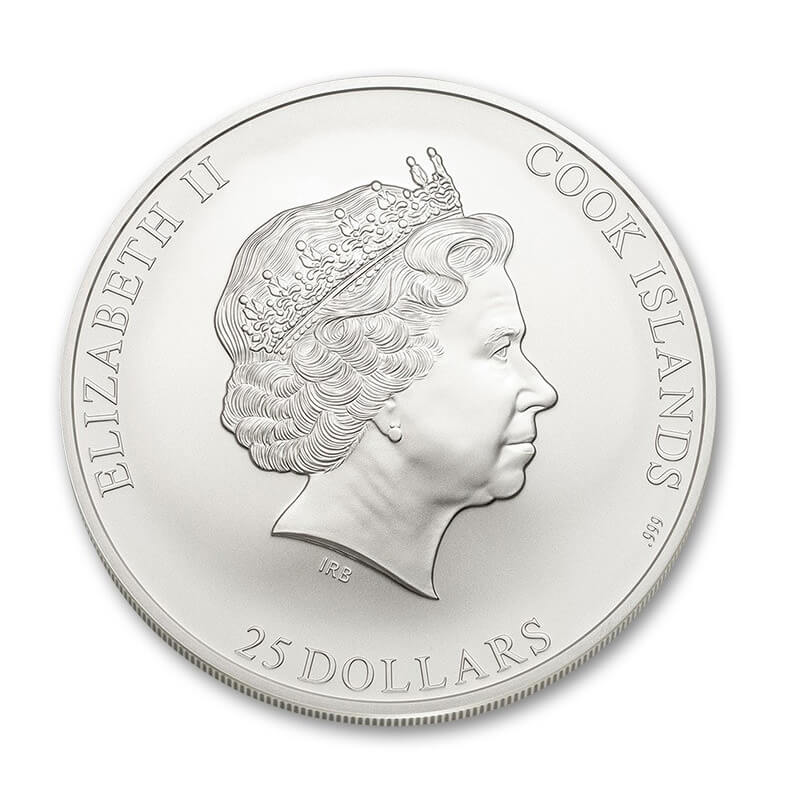 The peaks of Denali are brought to life in spectacular topographic detail with this beautiful first issue of the “7 Summits” series. Featuring a limited mintage of only 777 coins, this limited edition proof coin is struck from 5 oz. of .999 fine silver!

With several distinctive qualities captured in this 5 oz. silver coin, it will take you a moment to register the 2016 5 oz. Silver Denali MS-70 (PCGS First Strike) coin in all its glory.

The first element to capture your attention is the coin’s impressive silver content: .999 fine silver. As far as natural beauty is concerned, silver is a precious metal that has been revered for centuries. If you’ve never held silver or had the opportunity to look at it closely, the 2016 5 oz. Silver Denali MS-70 coin will have you falling head over heels with delight!

Struck from 5 oz. of fine silver, this coin has a unique and very low mintage of only 777 coins. Coins with low mintages are uniquely positioned to be in high demand, simply because there are so few of them! If you’ve ever collected baseball cards, stamps, or antiques, you’ve experienced this firsthand.

Adding to the Silver Denali’s natural beauty is the way it captures a “bird’s eye view” perspective of Alaska’s mighty Denali. Previously known as Mount McKinley, Denali is a natural wonder. It’s the highest mountain in all of North America: from the northern tip of Canada, through the United States, and to the southernmost point of Mexico. It’s also the third highest peak in the world.

Why Buy this 5 oz. Silver Coin?

As if there aren’t enough attributes of the 2016 5 oz. Silver Denali MS-70 to dazzle your senses, this particular silver coin represents near physical perfection. The Professional Coin Grading Service (PCGS) guarantees each coin to be MS-70 grade. Certified museum-quality MS-70 coins bear no noticeable imperfections.

This is partly due to the coin's status as a "First Strike" coin. A First Strike coin from PCGS designates coins issued in the first 30 days of the mint’s release for that year. The First Strike distinction means it is from among the coin’s earliest production runs.

The “7 Summits” coin series brings to life the highest mountain on each of the seven continents, all in exceptional detail. As the first entry in the series, this coin depicts Alaska’s mighty Denali, an ancient inhabitant of our landscape. Interest in Denali has piqued over the years because of its name change and what it represents.

The name change, from Mount McKinley to Denali, officially occurred in 2015, though it had been sought by Alaskan leaders for decades prior. The official action returned the name of the mountain to the native peoples whose history throughout that region is so deep and rich.

Ian Rank-Broadley's splendid portrait of Her Majesty Queen Elizabeth II graces the obverse side of the 2016 5 oz. Silver Denali Coin. It's a fitting portrait of the Queen—clad in her crown—since she is Head of State of the Realm of New Zealand, whose currency is used in the South Pacific-based Cook Islands. Cook Islands coins have a reputation for being distinctive; this 5 oz silver coin is no different.

"ELIZABETH II," "COOK ISLANDS," and "25 DOLLARS" are inscribed on the obverse side of the Silver Denali.

The reverse side of the 2016 5 oz. Silver Denali Coin exhibits smartminting© technology from Coin Invest Trust. This leading-edge technology brings Denali’s peaks to life in magnificent high-relief 3D topographic detail. The “bird’s eye view” perspective perches you high above the mountain, allowing a magnificent view of the coin’s frosted foreground and glamorous shine which enhances this outstanding 5 oz. silver coin.

The reverse side of the coin includes an inscription of the name of the coin, the height of the mountain, and the place: "DENALI 6190 m - Alaska Range, North America." Toward the bottom are "The 7 SUMMITS" and "2016," the name of the series and the coin's year of issue.

How Much Do Silver Denali Coins Cost?

Call U.S. Money Reserve for more information on Silver Denali MS-70 Coin prices. As certified coins, these 5 oz. silver coins are special. They are evaluated and graded for their condition and rarity by a third-party grading service—in this case, the Professional Coin Grading Service (PCGS). The higher the grade, the more perfect the coin. Each one of these Silver Denali Coins is certified museum-quality MS-70 by PCGS. Call U.S. Money Reserve to learn more.

Account Executives are standing by to answer any questions you may have about certified coin prices and availability.

The 2016 5 oz. Silver Denali MS-70 Coin is available online or over the phone through the U.S. Money Reserve, America's leading distributor of government-issued silver. This coin has a very low mintage of only 777 coins.

Call to learn more about silver coins and to buy the 5 oz. Silver Denali. Each of our Account Executives brings professional experience to precious metals ownership, and each one aims to build a meaningful, long-lasting relationship with every client. Experience the U.S. Money Reserve difference today!