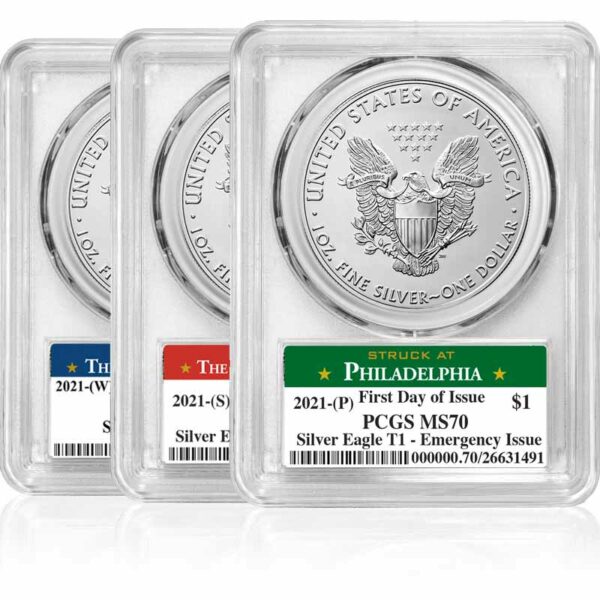 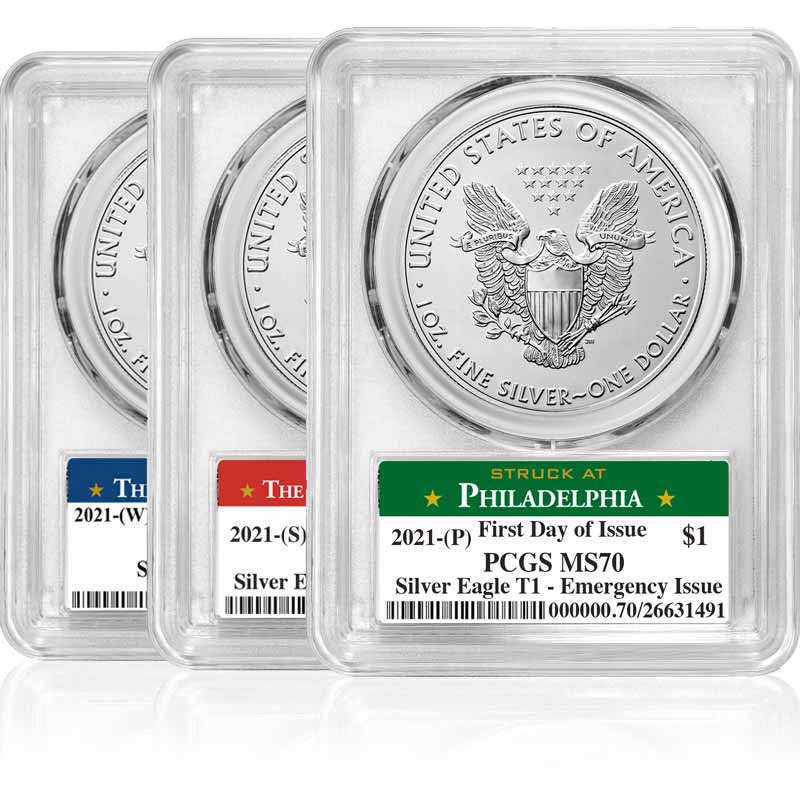 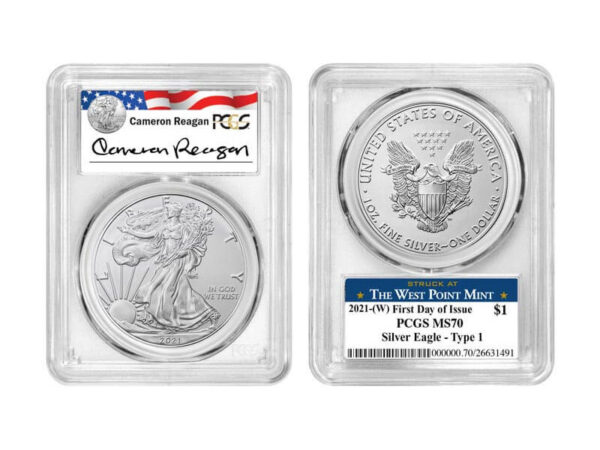 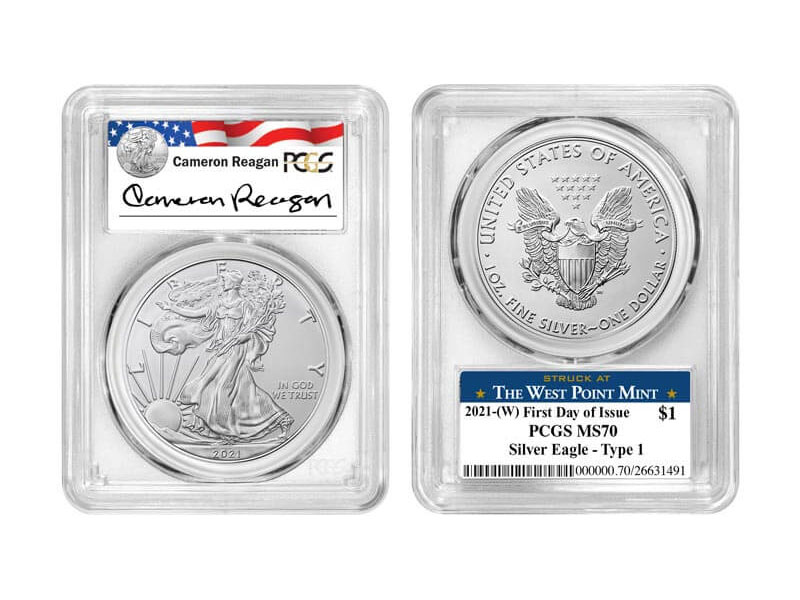 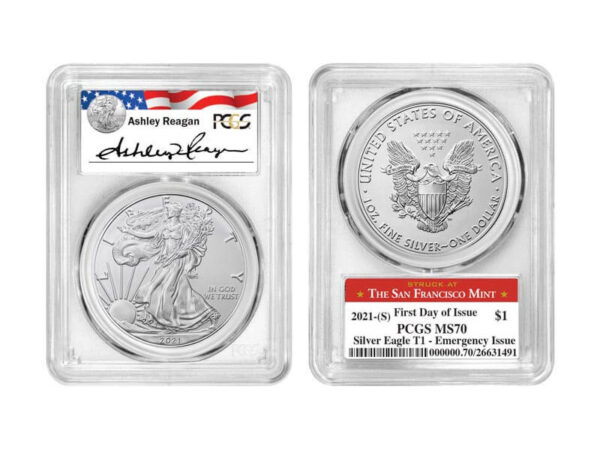 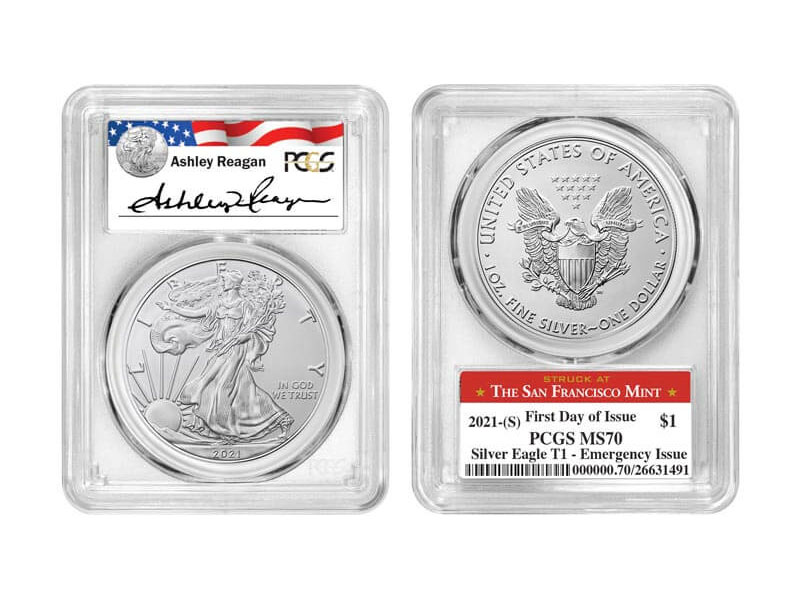 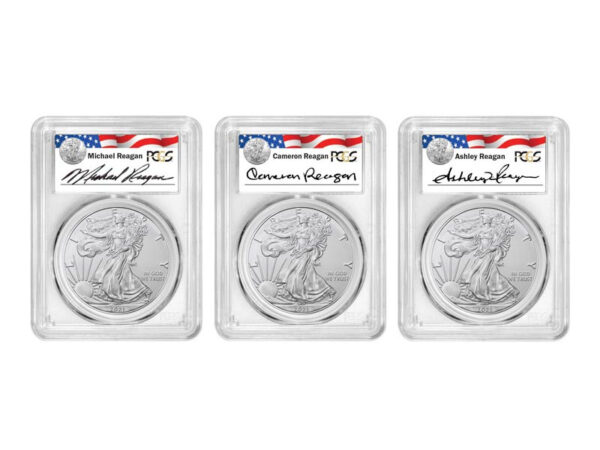 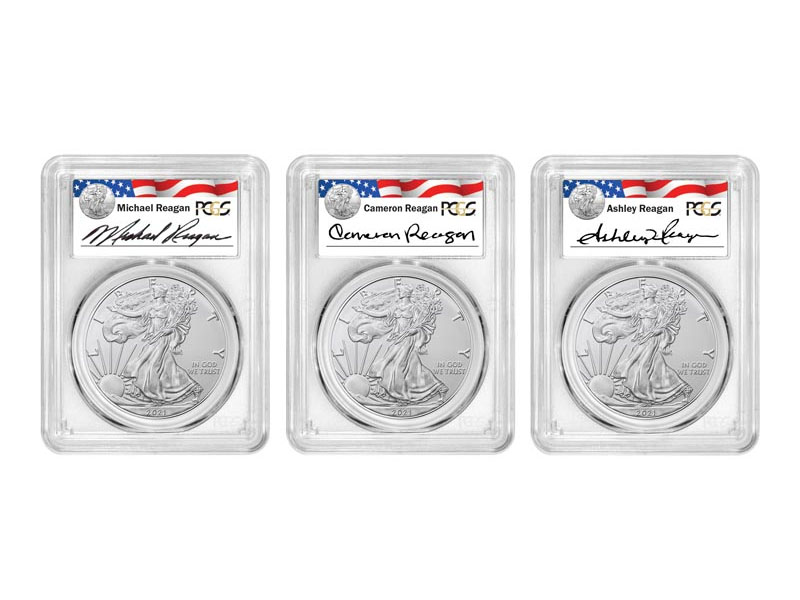 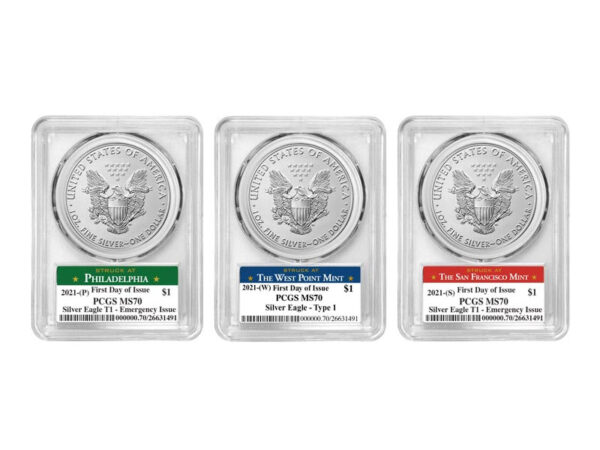 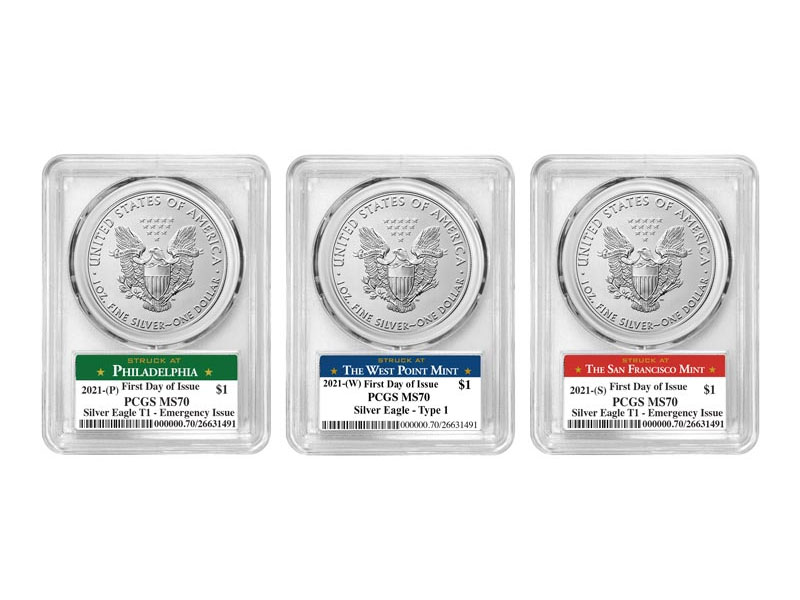 Exploding demand and global supply constraints forced the U.S. Mint to strike 2021 Silver Eagle coins on an emergency basis at the San Francisco and Philadelphia Mints in addition to its West Point Mint Facility. The 2021 3-Coin Silver American Eagle Reagan Legacy Set contains Silver Eagles from all three Mints and features one of the final appearances of John Mercanti’s iconic eagle reverse design. Each coin is graded MS-70 and certified with a PCGS specialty label signed by an esteemed member of the Reagan family.

Silver Eagles are typically minted at the West Point Mint. However, soaring demand and constrained supply levels forced the U.S. Mint to strike Special Emergency 2021 issues from the San Francisco and Philadelphia Mints! Each coin in this three-coin Silver American Eagle set is certified Museum-Quality MS-70 “First Day of Issue” by PCGS with a special “Type 1” designation.

Ronald Reagan’s legacy as the father of the Silver American Eagle program is perfectly captured here. As part of U.S. Money Reserve’s exclusive Reagan Legacy Signature Series, each coin is designated with a PCGS specialty label hand-signed by Ronald Reagan’s son, Michael Reagan, and the late president’s two grandchildren, Cameron and Ashley Reagan. Own the only series that connects three generations of Reagans—exclusively available from U.S. Money Reserve.

Silver American Eagle Coins were first minted in late 1986, having been authorized by an amendment in the Liberty Coin Act and signed into law by President Ronald Reagan on July 9, 1985. At that time, production of silver coins was intended to deplete what many saw as the country’s overly large silver stockpile. Production continues today, however, and numismatists and others cannot get enough of this amazing Mint State Silver Coin.

Thanks to renowned artist Adolph A. Weinman and an expert minting process, the portrait of Lady Liberty that appears on the 1 oz. Silver American Eagle Coin’s obverse springs to life. The design is known as “Walking Liberty.” Displayed initially on the U.S. Half-Dollar of 1916-1947, it’s an iconic American work of art too important to leave off our nation’s modern-day coinage.

The same minting process that presents “Walking Liberty” so well brings similar magic to Chief Engraver John Mercanti’s “Heraldic Eagle” image on the Silver American Eagle's reverse side. Raised prominently and defined so well within the coin’s silver, the eagle’s wings seemingly move as the bird of prey carries an olive branch and arrows over its family nest. This majestic eagle is one of the chief reasons there’s no coin quite like this Mint State Silver Coin. The year 2021 also marks the final year of this beloved and classic American design.

How Much Does the 2021 3-Coin Silver American Eagle Reagan Legacy Set Cost?

Silver prices are influenced by silver supply, industrial demand, and jewelry demand, along with global economic conditions. Shifts in these markets can lead to changes in the pricing of silver coins.

Where Can I Buy Mint State Silver American Eagles?