What Will Be the Fallout of Consumer and Corporate Debt? USMR Market Insights 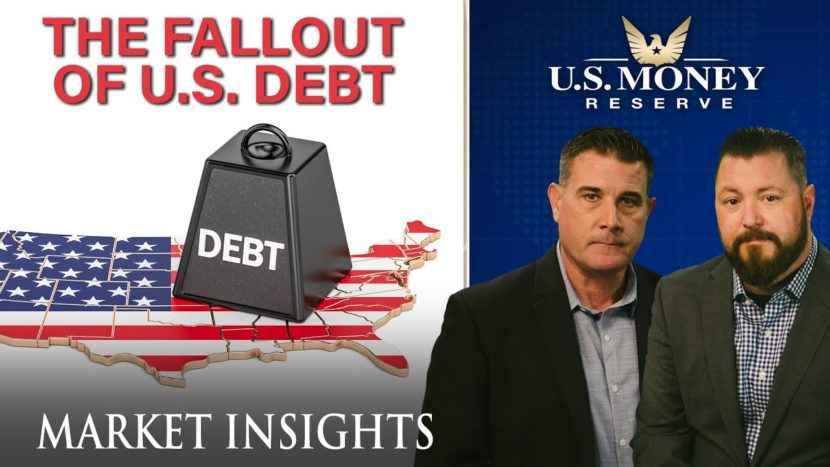 The consumer debt in the United States just hit 4 trillion dollars and the corporate debt has now reached over 3 trillion dollars. What will be the fallout of these massive debts? In this video, Coy and Patrick talk about the national and global debt.

What Will Be the Fallout of Consumer and Corporate Debt?- Video Transcription

Today, we're here with Mr. Patrick Brunson and we're going to continue our segment in regards to national debt and we're going to be talking about some of the global debt issues that are now taking place worldwide. Mr. Brunson, a couple of things that came out on the news today that I think that is very interesting is that today CNBC news currently announced that the consumer debt here in the United States just hit $4 trillion. And the flip side of that, at the same time, Forbes magazine is talking about that there's a massive tsunami of debt that is going to be required to be paid by companies or corporations that's going to affect the stock market. And that the corporate debt here in the United States has now reached over $3 trillion. So just with those numbers alone, we're looking at $7 trillion between consumer and corporate debt. What do you think the fallout of that is going to be over the course of time?

I mean, that's the million dollar question. If you look at just about every recession or depression that we've had in history, it's all been, it's all revolved around our debt scenario. The Great Depression, you know, the debt that we were in at the time, that they had to make some big changes like the actual golden circulation back then had to be recalled to try and help us get out of the actual depression. Um, if you look at the deficit going back to the 2008 financial crisis, that was one of the big issues and they didn't quite fix it. That's the problem. Instead of trying to fix the issue that was causing all this debt, they printed more money and created more debt to pay back the debt they already had.

And from my understanding, one of the topics that we talked about a few weeks ago was Christine LeGarde and the International Monetary Fund. She's blaming this issue not only on printing the $4 trillion, but keeping interest rates subdued for a long period of time. And in some of these areas that we've done over the course of time, we've talked about how under the Obama administration and Janet Yellen, we kept interest rates suppressed to 3% or lower for an extended period of time. Now my opinion is that they did that so they could get that four trillion into the banks. And of course if we kept the interest rates at very low or kept them very low for an extended period time, it would start leaking out into the consumer and the corporate market. Would that be accurate? To a certain extent. Um, that's one of the big issues with the programs like the tarp program and the QE program. A lot of this money was printed and given to the big banks to loan out and stimulate the economy.

They were supposed to loan that money out to consumers like you and I. And that money was supposed to be used to actually stimulate and get us out of the 08 financial crisis. But because the Fed lowered interest rates to almost zero, it basically got to the point where the banks had no incentive to loan the money out, cause they weren't gonna make anything on it. There's no interest. Right. So in turn, they turned around and pretty much shoved it into the stock market. Right. And you've got a great point. And as a matter of fact, that's actually one of the topics being discussed right now, is that we know that there's controversy between the Trump administration and Jerome Powell, current head of Federal Reserve. For a consumer, if you look at the 2018 time frame, we saw the stock market see some extremely rocky times for 12 months.

And if you'll look at the times that Jerome Powell raised the interest rates, the stock market started going down. That's right. And that would confirm with what we're discussing right now, that the interest rates play a critical role. Because if they raise interest rates; for you and I, if we're doing a car loan, we're doing the student loan, which is a lot of money, you know. A small interest rate hike doesn't affect us as much as it does for a company, who may be borrowing billions of dollars. $1 billion at a core percent interest rate, is a lot. So that's why the stock market would go down, and the dollar dropped. And the dollar dropped. Right. So what we're seeing now, on top of that, is we saw today that they also announced that the housing market has slowed down to a period of where it was around 2015. Oh yeah.

Oh absolutely. That would probably be due to the fact that them raising interest rates, would that be accurate? yeah, to a certain extent. I mean, this whole scenario is real difficult for people to understand. Most consumers do not understand the difference between the deficit in the budget or the debt itself. Right. You know, so there's a comparison that's out there that a lot of different entities try to use to help people explain it. And the best one that I've come across is, let's say you come home from work one day and there's a sewage backup in your neighborhood and you get to the house and the sewage is all the way up to the ceiling. Do you fix the sewage backup and remove the sewage or do you just raise your ceilings higher to take on more? Well under the current situation, it appears that they're raising the ceiling. That not what you need to do. Exactly.

I don't know about you. If that was at my house, I would just get a new house. You know? And that may be the case with the U.S. dollar, is some people talk about on a regular basis, maybe go into an alternative currency, which has been discussed many times. The information is out there, folks. It's available in the news sources, on a regular basis. We're getting it on a daily basis. And as we've talked before in the past and Mr Brunson and myself have also explained, it's very important to be proactive, as opposed to being reactive, right? You have to do something in advance before it happens. So click on the link below to get our latest report, ‘25 reasons to own gold now', and you can also get a copy of our other reports that we've done in the past. If you're watching from YouTube, subscribe to our channel so you don't miss a single episode. For U.S. Money Reserve, I'm, Coy Wells and I'm Patrick Brunson, and as always, thank you for watching.