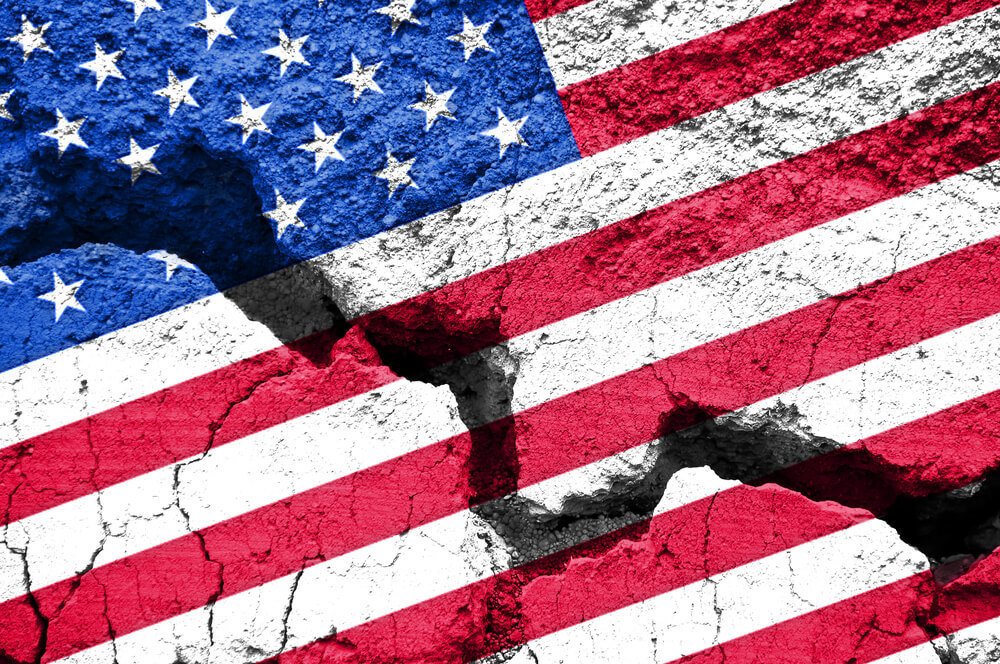 Will Political Polarization Destroy the Economy?

Back in July 2004, while delivering the keynote address at the Democratic National Convention, state senator and future President Barack Obama famously declared, “There is not a liberal America and a conservative America—there is the United States of America.” He went on to decry the seemingly untraversable divide between red states and blue states.

Despite President Obama’s observations and aspirations, America has become politically polarized. Many red states have become so intensely red, they’re maroon—while a fixed faction of blue states are downright indigo. Taking in one night of cable news—or ad-hoc coverage from Capitol Hill—or an impassioned political opinion piece—confirms that in 2019, we indeed have a liberal America and a conservative America. And both the Republican and Democrat camps have left little room in their tents for a happy medium or any semblance of tempered thinking.

All of this leads to the question: Has moderation become extinct? In 2017 the Pew Research Center concluded a political polarization study and charted the shift in America’s political values based on surveys conducted in 1994, 1999, 2004, 2011, 2015, and 2017. Their research confirmed that Americans have indeed become more ideological and more partisan over the last 25 years.

Back in 1994, those identifying themselves as “consistently liberal” or “consistently conservative” were dwarfed by the “mixed” middle ground of moderate Americans who stated that they did not embrace either extreme left-wing or extreme right-wing political views.

By 2017, however, the mountain of centrism from 1994 has been completely overshadowed by the towering peaks of partisan intensity.

The Pew report concluded that “the share of Americans with ideologically consistent values has increased over this time, and these political values also have become more strongly associated with partisanship.”

Clearly there’s a boisterous sector of the country that views President Trump as unpresidential, divisive, even unfit for office—and an equally passionate group that believe he’s an economic strongman finally dealing with trade, immigration, and the plight of the blue-collar worker. Beyond the extremes, however, lies a growing divide between the major political parties and an ever-dwindling political middle that is threatening discourse, compromise, legislation, and our very way of life.

A recent article entitled “What Is the True Cost of Polarization in America?” published by U.C. Berkeley maintains that the impact of polarization isn’t limited to politics: “Research shows that polarization is affecting families, workplaces, schools, neighborhoods, and religious organizations, stressing the fabric of our society.”

It is also stressing our pocketbooks. The government shutdown earlier this year cost an estimated $11 billion. In recent days, pressing pieces of legislation and spending packages have failed in Congress, including a disaster aid bill, critical infrastructure spending, and the Gold Star Family Tax Relief Act. Meanwhile, the economically charged issues of healthcare, immigration, and tax reform 2.0 are all currently dead in the water.

The truth is, Democrats are not interested in giving President Trump any legislative victories prior to the 2020 election any more than he’s interested in compromising with what he perceives to be a hostile body.

Nearly halfway through the year, the 116th Congress has only passed 17 laws, and leaders on both sides have been moaning. In April House Minority Leader Kevin McCarthy declared that the country has endured “100 days of nothing,” while Senate Minority Leader Chuck Schumer called his chamber a “legislative graveyard.”

And the fallout of this politically charged atmosphere could hit even closer to home in a few short months when the government runs out of money. In early May, CNN reported that “the U.S. government is hurtling toward a potential financial crisis, and no one in Washington seems to know how to stop it.” Indeed, the government will be out of cash in October, and without a budget agreement or extension, $120 billion in automatic cuts will be made to domestic and military programs.

As Congressional energy has been consumed by impeachment chatter, subpoenas, and contempt talk, little progress has been made to stem the coming cash crisis that could result in “an unprecedented default on U.S. debt—a situation that could trigger a worldwide economic catastrophe.”

The bottom line is that policymakers can’t come to a table that no longer exists. And in this hopelessly ideological and rabidly partisan environment, distrust of government runs rampant, our ability to solve problems is greatly hampered, and the odds of compromise and consensus are remote. The political camps are deeply entrenched, and the President has already demonstrated his own intransigence. So is the country ready for another record-breaking government shutdown or catastrophic debt default? Better yet—are you?

There are precious few portfolio assets that are “polarization proof”—but throughout the tumult and turmoil of economic history, none has come as close to being immune as physical gold has.