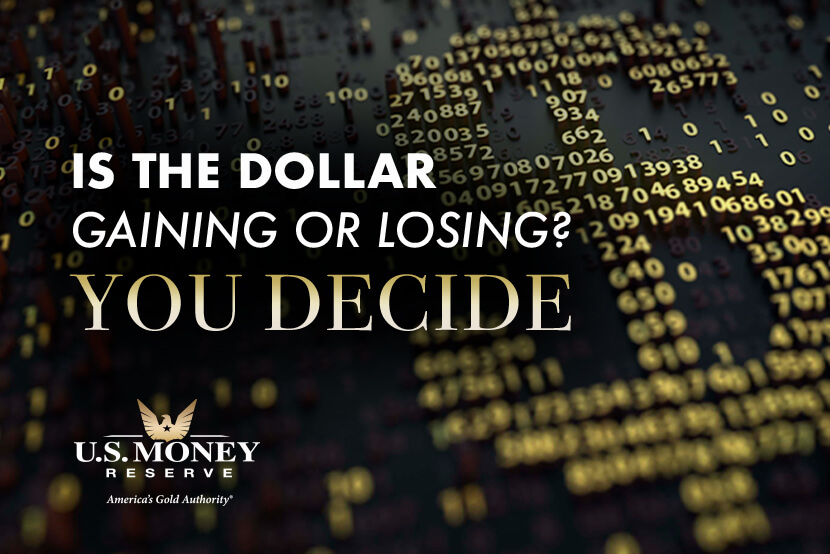 Is the Dollar Gaining or Losing? You Decide

Some market analysts say the U.S. dollar is weakening by the day on the tail of trade tensions and the ballooning national deficit. Other analysts view the dollar as strong; among other reasons, they believe the dollar is the world’s one true reserve currency and will remain such.

But what is the dollar really doing? We look at both sides of the fence.

When we think of “strong” vs. “weak,” we perceive strong as being mighty and weak as being meek. That’s not necessarily the case with the U.S. dollar. When it comes to the dollar, strong isn’t always better, and weak isn’t always worse, according to the Federal Reserve Bank of St. Louis.

“You can likely think of several advantages of being able to buy more foreign currency, but just because a country’s currency is stronger does not mean that everyone in that country is better off,” the Federal Reserve Bank of St. Louis says.

J.P. Morgan Asset Management notes that the U.S. dollar’s exchange rate is critical in shaping returns for financial assets around the world. Furthermore, it affects U.S. inflation and interest rates, as well as global commodities prices.

What Is the Outlook for the Dollar?

The outlook for the U.S. dollar “appears increasingly positive,” the DailyFX news website reports. Pricing of the U.S. dollar edged upward in May 2020 after Jerome Powell, chairman of the Federal Reserve, once again signaled reluctance to employ a negative interest policy to help bolster the economy. DailyFX notes that lingering U.S. tensions with China also could be positive for the U.S. dollar.

As with so many financial vehicles, the value of the U.S. dollar fluctuates from day to day. In mid-May 2020, for instance, the dollar weakened slightly as signs of economic improvement emerged and risk aversion waned. Still, the U.S. Dollar Index, which gauges the dollar’s strength or weakness compared with a basket of foreign currencies, is up about four percent for the year.

“The dollar is doing better than other currencies right now, but it could pull back as people fear inflation from printing trillions of dollars [to stimulate the economy],” Edmund Moy, former director of the U.S. Mint, told CNN Business.

Gold’s Relationship to the Dollar

As noted by CNN Business, gold is viewed “as a safer, steadier place to park money in times of turmoil.” As such, its prices are up nearly 15 percent in 2020, while some other asset classes are floundering.

Yet gold prices have climbed at the same time the U.S. Dollar Index has risen. However, some experts believe the dollar will weaken as the Fed continues to print money and federal officials earmark more money to stimulate the economy, driving up the national budget deficit.

An unstable dollar could be positive for you, though. Amid volatility and uncertainty, diversification into tangible assets like gold can help protect you from the instability of the dollar and other asset classes.

“Gold [historically] outperforms other asset classes when hard times come and often rises when other assets are crashing. Including gold in your portfolio protects your wealth by offsetting losses in your other assets,” Diehl says.

You’ll need to navigate a variety of risks in the years ahead, no matter which direction the dollar goes. One way to keep pace—and even outpace—an unsteady dollar is through education. Invest in your own knowledge and skills in your professional life, finances, and beyond. Get started with U.S. Money Reserve’s Resource Library, which is full of free Special Reports about everything from portfolio diversification to what the next recession could look like.