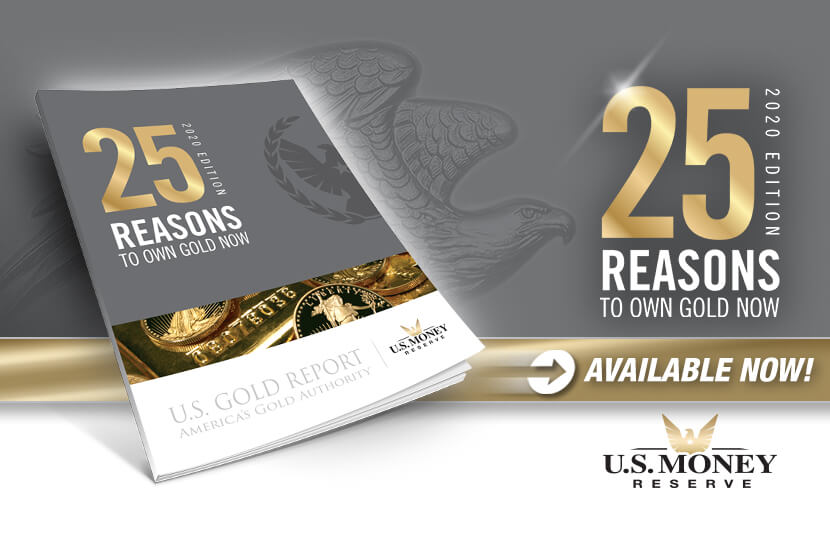 Uncertain times at home and abroad continue to make gold shine as a safe-haven asset.

The price of gold jumped more than 18% in 2019. That was gold’s best annual performance since 2010. Now experts envision that the gold rally will gain even more momentum in 2020 as economic and political uncertainty lingers.

In our latest Special Report, we offer 25 reasons to own gold right now. Here, we give you a sneak peek at five of those reasons. To find out all 25 reasons why gold should be a key part of today’s portfolios, download your free copy of the special report today!

In this low-interest-rate environment, gold can act as a safety net in case of a potential downturn—a downturn that additional cuts in interest rates might be unable to prevent.

2. Trade tensions show no signs of letting up.

Perhaps the biggest unintended consequence of the trade war between the U.S. and China is the growing sense of uncertainty. Traditionally, gold has thrived when trade conflicts and other global woes contribute to uncertainty.

In December 2019, the U.S. and China ironed out the first phase of a trade deal aimed at cooling the heated trade rhetoric between the two global superpowers. But that’s only the first phase of the U.S.-China trade agreement. Much more remains to be done to resolve trade differences between the two nations. As such, the trade spat could persist throughout 2020 and beyond.

>> Download U.S. Money Reserve’s special report 25 Reasons to Own Gold Now to learn about the role of trade in making gold a safe-haven asset.

3. The threat of a recession still looms.

Meanwhile, 52% of American adults surveyed in December 2019 by personal finance website FinanceBuzz indicated that they were worried about a recession coming within the next year.

If these predictions come true, gold could help you ride out the next economic downturn.

>> Want to know more about the relationship between a recession and the attractiveness of gold? Download U.S. Money Reserve’s special report 25 Reasons to Own Gold Now.

4. As voters go to the polls, political uncertainty lingers.

In February 2020, the U.S. presidential election officially kicked off in Iowa and New Hampshire. Of course, we won’t know until November 2020 who will occupy the White House from 2021 to 2025.

In the meantime, partisanship in our nation’s capital continues to flare up, thwarting progress on key issues like healthcare, infrastructure, taxes, and immigration. In fact, some of the current administration’s signature initiatives have gotten bogged down in Congress and the courts.

The lack of clarity over major legislative efforts is slowly chipping away at enthusiasm among consumers, investors, and business owners. That enthusiasm might wane until the presidential election is decided—and may even persist after that.

Political uncertainty breeds volatility, and both of those often fuel demand for gold.

>> To dive into the correlation between political uncertainty and gold, download U.S. Money Reserve’s special report 25 Reasons to Own Gold Now.

Outstanding student loan debt in the U.S. exceeds $1.6 trillion—around the size of the Russian economy. Only mortgages surpass student loans as a source of debt in our country.

“Increased reliance on student debt crowds out an individual’s access to other forms of household credit, which likely delays business formation and homeownership, important drivers of economic growth and wealth creation,” according to a January 2020 report from Moody’s Investors Service.

Most importantly, the mountain of student loan debt may leave our next generation unprepared to be the stewards of America’s future. Highly educated and unencumbered young people are key to sustained economic growth. What happens if they can’t play the role they are supposed to play? The nation is experiencing a debt crisis of enormous proportions, and until a fiscal solution is hashed out, gold could prove to be a sensible hedge.

>> To get up to speed on the correlation between student loan debt and the umbrella-like protection of gold, download U.S. Money Reserve’s special report 25 Reasons to Own Gold Now.