Why 2016 Keeps getting Uglier for US Economy 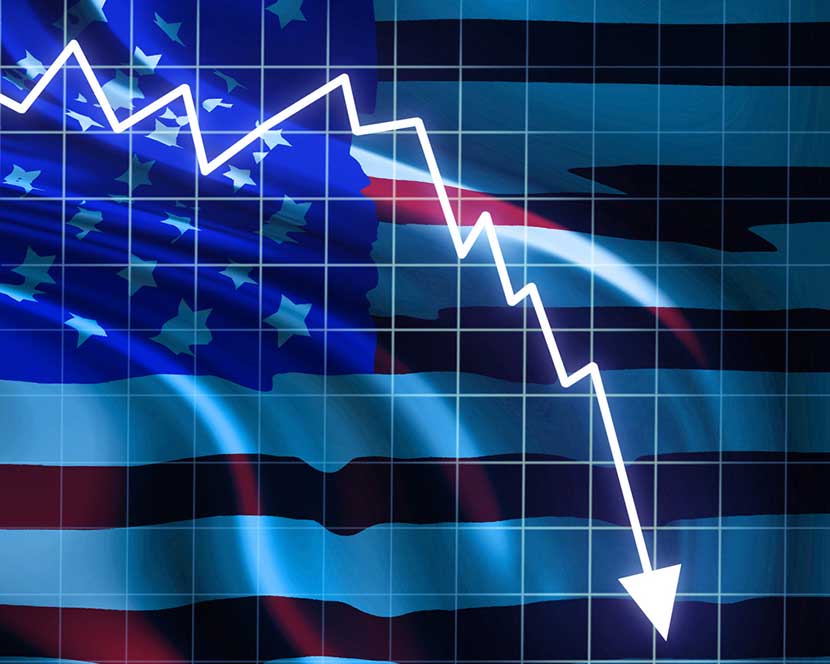 Friday's report showing that gross domestic product grew just 0.7 percent in the fourth quarter brought to a conclusion another year of dashed hopes for economic liftoff — “escape velocity,” as it is sometimes called.

Seven years of zero interest rates, $3.7 trillion worth of Fed money printing and more than $6 trillion piled onto the public debt resulted in an economy still struggling to break 2.5 percent full-year growth. In fact, if the first reading on GDP holds up on revision, the U.S. economy will have expanded just 2.4 percent for the full year, according to the Commerce Department.

At the start of 2015, most economists expected U.S. growth of 3 percent or better, predicated on sizable gains in consumer spending, business investment and construction. Instead, the year featured consumers mostly hanging onto their gas savings, weak capital expenditures (including a decline of 1.8 percent in the fourth quarter) and slumping oil prices battering investment instead of lifting spending.

Looking ahead, the early indicators are not good, with chances of a recession gaining more traction on Wall Street.

While many of the latest economic numbers, including the GDP reading, are a pretty good distance from recession, troubles are brewing in some less obvious places.

Most notably, the bond market has been screaming recession for weeks.

Spreads on high-yield bonds have widened beyond 800 basis points (8 percentage points), gaps that for the past 30 years always have presaged either a recession or “growth scare,” according to Tom Lee, managing partner at Fundstrat Global Advisors.

The high-yield market is pricing in a 9 percent default rate, something akin to the 1990 recession, a comparatively shallow downturn that nevertheless helped sink President George H.W. Bush's re-election bid in 1992. Standard & Poor's said its current corporate bond distress level of 29.6 percent is at its highest level since July 2009. S&P said it downgraded 165 issuers in the fourth quarter compared with just 38 upgrades.

The plunge in oil prices is spreading a deflationary reaction across the fixed income market, with Treasury Inflation-Protected Securities funds seeing their biggest outflows in 33 weeks last week, according to Bank of America Merrill Lynch. Fed officials have insisted the current inflation retreat is based on “transitory” factors like the oil bear market, but the market isn't a believer, reflected in part by the exodus from inflation protection in fixed income.

In fact, the market-Fed divide is growing at a rapid pace.

The Federal Open Market Committee at its December meeting indicated there likely would be four hikes in its interest rate target in 2016. Traders, though, are pricing in almost no chance of a move this year, with the first better-than even possibility for February 2017 and the first increase not fully priced in until June 2017. That's a huge communication gap the Fed will have to find a way to bridge at its March meeting, which was supposed to see a rate hike that now is almost certain not to happen.

For the Fed to move forward on a rate-hiking cycle, or to do any policy normalization during 2016, a good deal would have to change.

Goldman Sachs reported Thursday evening that its analyst index of economic indicators is at its lowest level since mid-2012. The most recent decline was fueled by drops in sales, exports and manufacturing in general. More importantly, Goldman reported that indicators for future activity are “quite low,” an indication of “softer business activity to start 2016.”

At the same time, Thursday's durable goods shock (a 5.1 percent decline) led Deutsche Bank to conclude that even its modest 1.8 percent GDP growth rate for 2016 may be too ambitious.

“The risks to our growth and interest rate projections are distinctly to the downside,” Deutsche said in a note to clients.

Of course, a falling market and weak economy are not necessarily poison to stocks.

The disappointing GDP data in the U.S. was drowned out almost completely by news that the Bank of Japan instituted negative interest rates in hopes of resuscitating its own moribund economy. Wall Street rallied on the view that more currency debasement in Asia would add another layer of pressure to the Fed to avoid tightening policy.

And Fundstrat's Lee, a relentless stock market bull, points out that negative years for junk bonds, such as 2015, are historically followed by great years for stocks, with the average annual return of 22 percent for the S&P 500.

The main danger to that outlook, of course, is recession. JPMorgan is pricing in a 22 percent chance of a recession, while BofAML said the risk is about 20 percent — both figures fairly close to their historical norm for any year.

“Headwinds from an appreciating dollar, transitioning Chinese economy and inventory overhang are weighing on growth. We can see the impact of this slowdown in the industrial-sector data,” BoAML said in a note. “However, leading indicators of economic activity suggest only a slowdown, not a downturn or recession.”