The Pot of Gold at the End of the Rainbow: An Origin Story

Home » Gold » The Pot of Gold at the End of the Rainbow: An Origin Story 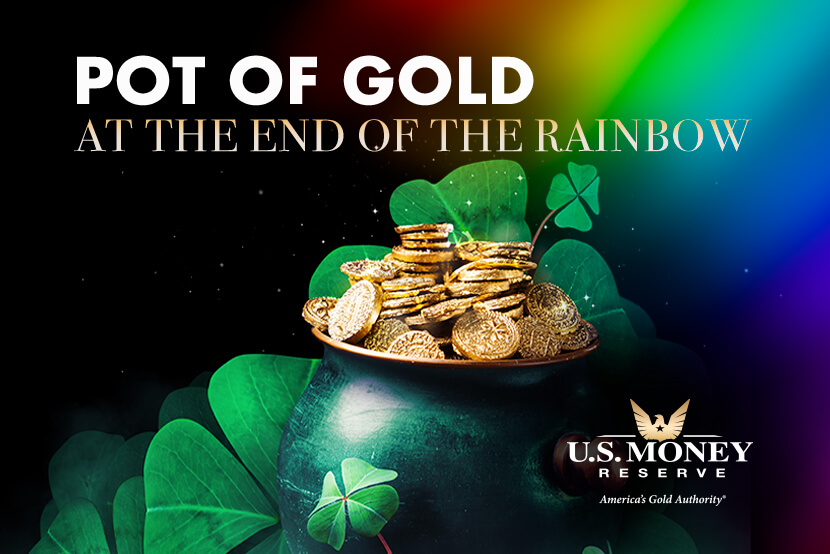 Of all the Irish myths that exist, the story of leprechauns and their pots of gold seems to have infiltrated American culture the most. You can’t go anywhere around St. Patrick’s Day without seeing posters of rosy-cheeked, red-haired fairies sliding down rainbows into cauldrons of gold coins. What’s the origin of the pot of gold at the end of the rainbow, and where can you find gold of your own?

Once Upon a Time

There are many old European stories describing fictitious creatures that hoard treasures. Many brave souls have tried to find their fortunes under the belly of a sleeping dragon or even in the furthest of depths of a mermaid’s sunken shipyard.

For those who might be fearful of fire and water, there is another fiery folk known for its vast stash—leprechauns. With a bit of cunning and a lot of luck, it is said that if you catch a leprechaun, he will tell you where his pot of gold is hidden. Beware, however, as the leprechaun is smarter than the average wood nymph, and you may be tricked into looking for gold at the ever-elusive end of the rainbow.

The Origin of the Pot of Gold

The most well-known origin story of the leprechaun’s pot of gold at the end of the rainbow involves a couple of poor farmers in Ireland. When this husband and wife pulled their very last carrot out of their garden, they found a leprechaun dangling from the roots. Being captured, the leprechaun promised one wish in exchange for his freedom.

The husband and wife could not decide on just a single wish, so they began wishing for everything—new tools, a house, jewelry—and the list continued until the leprechaun interrupted them. Dismayed by their greed, the leprechaun told the couple they might have all they wished for and more if they could find his pot of gold hidden at the end of the rainbow. The leprechaun winked and left the farmers to chase rainbows forever, looking for a fictitious fortune.

Pot of Gold at the End of the Rainbow—Meaning

With St. Patrick’s Day just around the corner, many places are gearing up for a celebration of everything Irish. Towns will soon be flooded with green shamrocks, red beards, and the iconic wall decoration of a leprechaun sliding down a rainbow into a pot of gold. Why, out of all the Irish folklore, is the leprechaun’s story of deception the one that people perpetuate? Well, like all great fables, there is a moral to the story.

This cautionary tale reminds us that relying on luck, magic, and greed can be a recipe for disaster. Instead of working hard and making strategic moves to build financial stability, people can be tricked into wasting their precious time and resources searching—metaphorically—for a pot of gold at the end of a rainbow.

Where’s Your Pot of Gold?

When the Irish came to the Land of Opportunity, they brought with them many traditions and the firm belief that you should work hard for your fortune. From coast to coast, the Irish earned their “pots of gold” in order to benefit their lives and the generations that followed. The Irish legacy is one reason the tale of the leprechaun’s promise of false fortune has become a fixture in almost every St. Patrick’s Day celebration. You may not believe in leprechauns, but if you want your pot of gold, you must do something to secure it for yourself.

Are you looking for your pot of gold at the end of the rainbow? Stop searching and start shopping with U.S. Money Reserve. Download our Free Gold Information Kit for more information about where to buy gold, how to buy gold, and what type of gold to buy.