What Does “Heads or Tails” Mean?

Home » Coins » What Does “Heads or Tails” Mean? 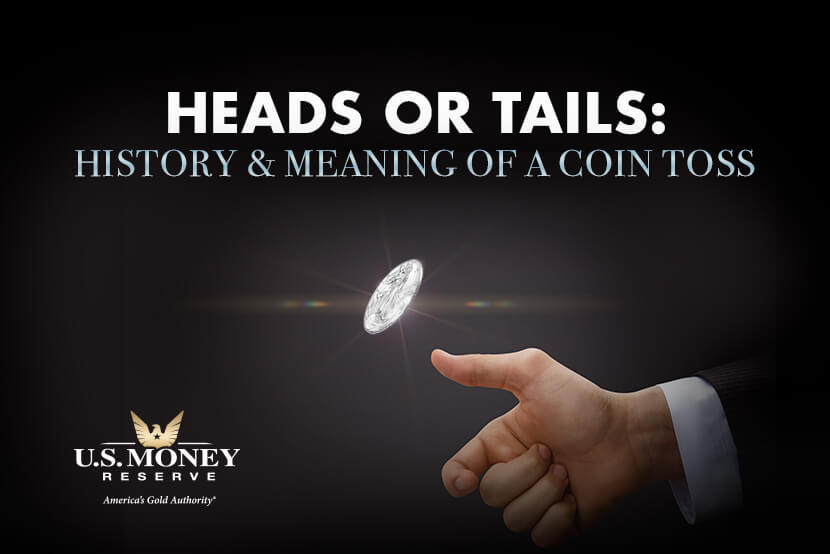 Who’s first in line for turkey? Who gets to deal the cards? Who picks tonight’s movie?

You can settle almost anything with a coin flip. Learn about the history of the coin toss, its significance over time, and how we use coin flips today to decide everything from United Kingdom elections to football kickoffs.

What’s the History of the Coin Toss?

Coin tosses have been around for centuries.

Since the Roman Empire and the Middle Ages in Europe, the coin toss has helped people to decide between two options, according to the JSTOR Daily website.

“Known as ‘heads or ships,’ in reference to the images that appeared on the Roman sestertii, the coin toss was a children’s game of chance as well as a gambling game among the patrician elite,” JSTOR Daily says. “Legend has it that Julius Caesar would settle legal disputes with a coin toss.”

In the Middle Ages, children played a version of the coin toss known as “cross and pile.” What we now know as “heads” was the cross, and what we now refer to as “tails” was the pile. Back then, the top of the coin bore the image of a cross, and the reverse side was called the “pile.”

What Does “Heads or Tails” Mean?

These days, coin tosses traditionally rely on a heads-or-tails choice. “Heads or tails” refers to the two sides of a coin, according to the Grammarist website.

“When a decision must be made with two equally viable answers, or two people disagree and must find an equitable way to choose between two answers, a coin may be flipped. As one person tosses the coin in the air, the other person calls either heads or tails,” Grammarist explains. “Heads refers to the side of the coin with a person’s head on it. Tails refers to the opposite side, not because there is a tail on it, but because it is the opposite of heads.”

How Are Coin Tosses Commonly Used?

From pigskin to politics, the coin toss has become a fixture in everyday life.

According to the Pro Football Hall of Fame, the coin toss in professional American football dates back to 1892. It’s also a mainstay in college and high school football, as well as numerous other sports. A referee and team captains gather at the center of the field for coin tosses.

A coin toss happens at the beginning of a football game to figure out which team gets possession of the football. It also occurs for the same reason at the outset of an overtime period.

As FOX Sports explains, unless the winner of the toss defers their choice to the second half, that team must choose one of two privileges. The loser is given the other privilege. Those two privileges are the opportunity to kick the ball to the other team or to receive the kickoff and to pick which end of the field the team will defend.

Perhaps the most critical coin toss in football happens during the NFL’s Super Bowl. It’s so important, in fact, that football fans place bets on which team will win the toss. By the way, a specially minted coin is made solely for each Super Bowl coin toss.

In several elections in the U.S. and the U.K., coin tosses have determined winners and losers. For instance:

But two of the possibly most crucial coin tosses in U.S. history had nothing to do with politics.

According to The Telegraph newspaper of London, the naming of what now is Portland, Oregon, came down to a coin toss.

Asa Lovejoy and Francis Pettygrove, who both owned the land that would become Portland, each wanted to name the new town after their respective hometowns: Boston, Massachusetts, and Portland, Maine. Pettygrove prevailed in the 1845 coin toss, and the Oregon city was christened Portland.

Another momentous coin toss took place in December 1903, when the Wright brothers flipped a coin to see which one of the pair would take flight at Kill Devil Hills, North Carolina, in the first-ever powered aircraft. Wilbur Wright won the toss. However, Orville Wright’s subsequent trip was deemed the first powered flight, according to The Telegraph. In 2013, the U.S. Mint released three commemorative coins—$10 gold, $1 silver, and 50ٴ¢ clad coins—to mark the 100th anniversary of the Wright brothers’ aeronautical feat.

“The coin flip seems like a simple, mundane act,” FlipACoin.com observes. “However, coin flipping can provide a wealth of insights on probability, statistics, and human history.”

Don’t leave your financial future up to a coin toss. Partner with U.S. Money Reserve to learn more about the power of precious metals.

What’s the Relationship Between the Perth Mint, Tuvalu, and the Cook Islands?
2020-10-21
Free Gold Information Kit