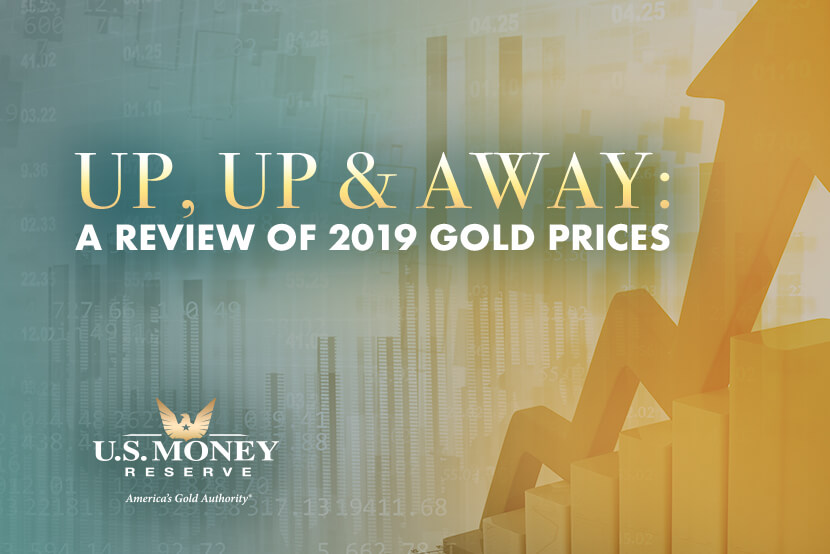 Slowing global growth. Tit for tat tariff trouble between the U.S. and China. Frightful fires in the Amazon. The price of gold rose by more than 18 percent! A lot happened in 2019. Here we revisit key gold price increases during the year and explain what may have spurred the most significant bumps.

Looking Back on 2019 Gold Prices

The year’s peak price, $1,545/ounce, happened on September 4. That was the day when Hong Kong Leader Carrie Lam pulled a controversial extradition bill that had sparked three months of protests in the region. Experts say the demonstrations, which continued through the end of 2019, have greatly damaged Hong Kong’s nearly $363 billion economy.

The May 2 low for the price of gold followed the Federal Reserve’s declaration that it planned to keep interest rates steady, signaling no impending move one way or the other. “I see us on a good path for this year,” Federal Reserve Chairman Jerome Powell said.

As for June 24, that was the day President Trump ordered severe sanctions against Iran in response to hostile acts by the Iranian regime. Trump said the sanctions would deny “access to key financial resources and support” for Iranian leader Ayatollah Ali Khamenei and his cronies. U.S. Treasury Secretary Steven Mnuchin said the sanctions would “lock up” billions of dollars in assets.

Continuing the precious metal’s hot streak, the closing price of gold crossed the $1,500 mark ($1,502.79/ounce) on August 8 for the first time in 2019. That peak came on the heels of a move by China’s central bank to shore up its currency and the U.S designation of China as a “currency manipulator.”

Gold’s price rose and fell after that, with the closing price reaching its 2019 high on September 4 ($1,552.06/ounce). But the price never dropped below $1,400/ounce after jumping past that mark in July.

Looking Ahead to 2020 Gold Prices

Some forecasters expect the precious metal to maintain its upward trend.

Lingering concerns about trade relations with China, uncertainty over the outcome of the 2020 presidential election, and questions about the long-term viability of stocks could contribute to the rise of gold in 2020.

On December 27, a writer for the Kitco News website, which tracks the precious metals market, noted that it “seems highly likely” that gold will post a “stellar performance” throughout 2020.

“The retail gold market is healthy, with gold being considered a mainstream choice,” David Tait, CEO of the World Gold Council, said in November 2019.

Help make sure that if the price of gold increases again, you’ll be able to take advantage of it. Bookmark resources for tracking gold prices and learn how gold can help strengthen and support a well-diversified portfolio. Call 1-844-307-1589 today for the latest market insights from experienced Account Executives.