How Does Gold Compare to Silver, Platinum, and Palladium?

Home » Gold » How Does Gold Compare to Silver, Platinum, and Palladium? 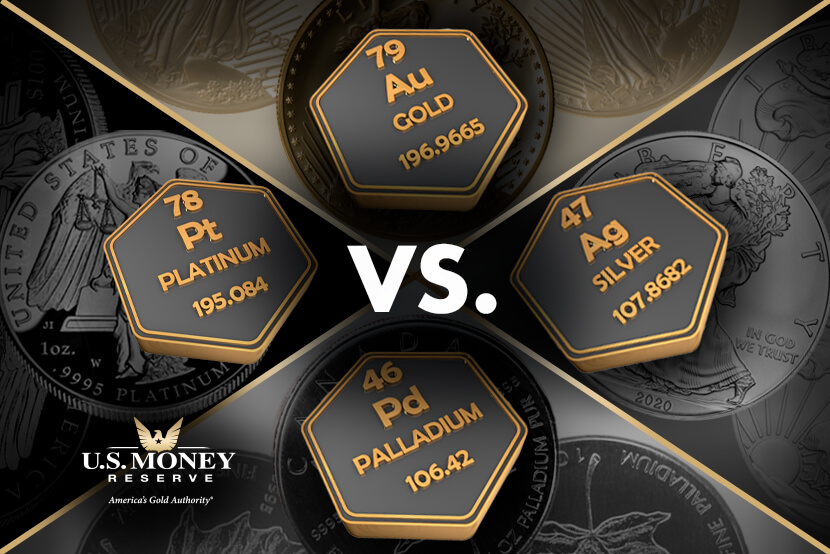 You face many choices when you’re buying precious metals. From the type of metal you buy to where you buy it, the array of options can be dizzying. In this article, we compare and contrast four common precious metals—with just the facts—to help you make the right decision for your portfolio.

Gold is like silver’s more affluent cousin. However, silver is also a standout member of the precious metals family. Both metals are beneficial as portfolio boosters and for their physical properties.

In terms of their practical applications, both metals shine.

Aside from jewelry, gold can be found in:

Silver is no slouch in the usefulness category, though. You can spot this metal in:

Of course, both metals—in bar and coin form, for instance—also hold unique financial positions. They can serve as hedges against inflation, as “safe-haven” assets, and as stores of wealth.

The long-term prices of both gold and silver have skyrocketed, contributing to their important place in portfolios. You know this if you’ve been watching the gold-to-silver ratio, which has also skyrocketed over the last two months.

Interested buyers use the gold-to-silver ratio as a timing indicator to help them decide when to buy gold or silver or which metal to buy at any given time, economist Arkadiusz Sieroń notes.

“We know that things can change at a moment’s notice, but based on what we can see now, we expect the rally across the board to continue,” Horowitz wrote on April 15, 2020.

Like silver, platinum offers some of the same physical benefits as gold. Platinum is used in jewelry, particularly engagement and wedding rings, as well as by the automotive, chemical, electronics, and healthcare industries. As the least reactive metal known to man, platinum tends to be more useful than gold; plus, it’s scarcer.

Pertaining to their status as financial assets, both platinum and gold can act as safe havens, hedges against inflation, and protections against market volatility. According to the World Platinum Investment Council, financial demand for platinum totaled 8,060 ounces in 2019, up 11% from the previous year.

In terms of price, gold currently costs more than platinum. Whereas the price of gold sat near $1,700/ounce in late April 2020, the price of platinum was in the neighborhood of $770/ounce. No matter the price, both gold and platinum are considered solid components of a portfolio.

In April 2020, the free financial newsletter Energy and Capital noted that while prices for the yellow metal were positioned for growth, platinum could be poised for even more significant gains. Part of the recent allure of platinum is that it has been trading at an all-time discount versus gold.

As of April 2020, palladium was the highest-priced precious metal on the market. While the price of gold was close to $1,700/ounce, the price of palladium exceeded $1,900/ounce.

Aside from its price being in the same proximity as gold, both metals offer practical uses. For instance, palladium is found in automotive exhaust systems, as well as in jewelry, electronics, and dental products. Palladium is a byproduct of platinum and nickel, and it purifies hydrogen.

“Palladium’s status as a byproduct to platinum or nickel mining means producers aren’t quick to respond to price changes,” Bloomberg notes. “In fact, output is projected to fall short of demand for a ninth straight year in 2020.”

Other than some similar applications, palladium and gold also are alike in terms of their ability to be hedges against inflation as safe havens and stores of wealth.

You have many options when it comes to precious metals. Call U.S. Money Reserve to learn more about gold and silver and how they compare to platinum and palladium.