America’s Future Got $7 Trillion Worse Since the Financial Crisis 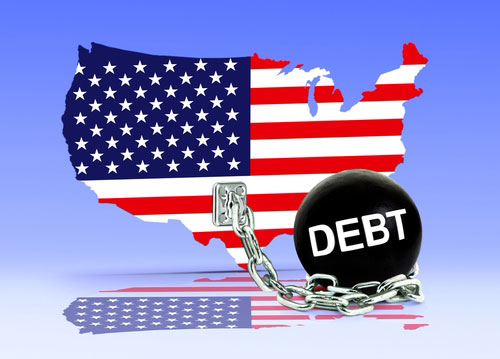 Still feeling uncomfortable about that tax bill you owed last month? Think about it this way: If you didn’t pay it, America’s fiscal future would look even worse than it does now, six years out from the financial crisis.

Driven by higher interest costs, Social Security and Medicare for baby boomers, as well as tax cuts made permanent in 2012, the federal debt held by the public is expected to hit $40 trillion in 2035, according to calculations by the Committee for a Responsible Federal Budget based on Congressional Budget Office estimates. Back in 2009, soon after President Barack Obama took office, the forecast for the 2035 burden was at least $7 trillion lower.

In 2035, the debt will almost equal the size of the U.S. economy; four years later it will match the previous record, set in 1946, at 106 percent of gross domestic product, the CBO estimated last year. Compare that to the 2014 debt burden of $12.8 trillion, or 74 percent of GDP.

The economy just isn’t growing fast enough to keep pace with the costs of caring for the soaring ranks of the elderly, and the discrepancy between spending and revenue is estimated to widen in the next few decades.

Republicans say their proposal passed by Congress last week will save $5 trillion and balance the budget within a decade. The Obama administration likes to tout how it’s reduced the budget deficit by three-fourths and is on track to narrow further.

Either way, the number of people paying Social Security taxes is expected to grow more slowly than the number of those receiving the entitlements. The number of taxed workers will increase 20 percent between now and 2045, while beneficiaries of Social Security’s Old-Age, Survivors and Disability Insurance (OASDI) funds will increase 57 percent over the same period, according to the Social Security Board of Trustees. As a result, there will be about two taxpayers per beneficiary in three decades, down from almost three now. For comparison, the same ratio was 3.4 to 1 in 2000.

Higher spending on debt servicing and entitlements means less money for other purposes, such as education or research. It also means some hard decisions at some point. In order to prevent debt from becoming an even bigger portion of GDP, the U.S. needs to increase taxes by 7.5 percent or cut spending by 7 percent, said Marc Goldwein, vice president and policy director of the Committee for a Responsible Federal Budget, a Washington advocacy group.

To bring the ratio more in line with the historical level of 40 percent, taxes would have to go up 13.5 percent, according to Goldwein. The later any action is taken, the deeper the spending cuts or the higher the tax increases would have to be.

If it’s the latter, tax day is going to become even more painful.