Why Does Rhodium’s Price Matter? 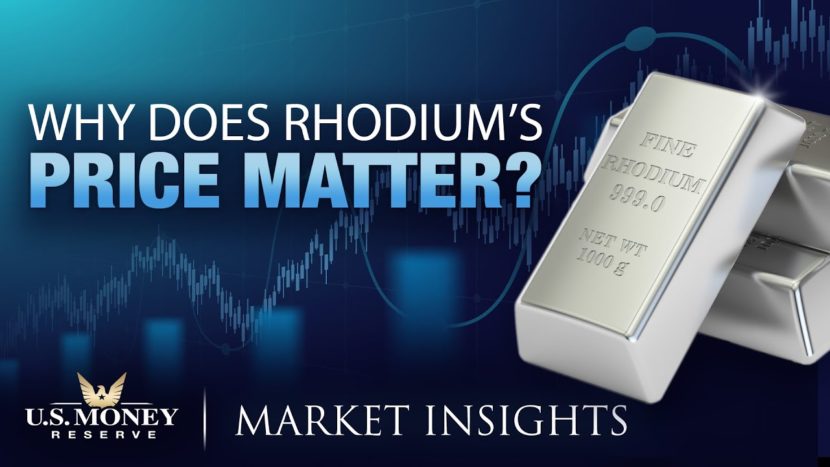 The precious metal rhodium is seeing a meteoric rise, as MarketWatch reports that prices are rising over 40% in 2020 so far. While Bloomberg has documented that most rhodium is mostly bought by industrial consumers, it has been speculated that the factors leading this rally could have major implications for holders of other precious metals, such as palladium. Learn more in this episode of USMR Market Insights with Coy Wells.

There was one commodity that has quietly been having an astonishing breakout performance. It is a precious metal that has even been dubbed the world’s most precious metal by some. The precious metal is rhodium. Rhodium is a metal in the same group as palladium and platinum. While rhodium is not commonly bought by nonindustrial consumers, some experts suggest it could function as a bellwether for prices of related metals such as palladium. So far this year, rhodium is price has increased by over 40%. The rally isn’t entirely new as Bloomberg reports that rhodium’s price has increased 12 fold over the past four years. Analysts from Metal Focus believe that rhodium may even beat its previous record price from 2008 of $10,000 an ounce. Recent demand spikes for rhodium has been driven primarily by industrial sectors in Asia, as well as a general interest in precious metals as a safe haven.

There are also supply side constraints too. Almost 60% of the world’s rhodium supply comes from South Africa where it is produced by a byproduct of platinum mining. Many of these mines have been suffering production issues and rhodium status as a byproduct of platinum makes it harder to increase output to meet demand. While the supply and demand issues still exist, many have suggested that rhodium’s price could keep climbing. Like rhodium, palladium is a precious metal from the platinum group that has been seeing a huge surge in its price recently. It is also mined as a byproduct of platinum and has been under the same supply crunch. It also has seen a recent increase in demand, mostly driven by its use in automotive manufacturing. While the supply and demand issues remain, many experts have predicted that the palladium could continue to surge upwards in price. To get more information about the supply of precious metals like palladium, call the number on your screen and get U.S. Money Reserve’s latest Precious Metals Report. This report answers many questions you may have about precious metals and how to diversify your portfolio along with it. So please click on the link below or call the number on your screen right now to get your copy and give us your thoughts and share this video. If you’re watching us from YouTube, please subscribe to our channel so you don’t miss a single episode. I’m U.S. Money Reserve’s Coy Wells, and thank you for watching Market Insights.