The Staffordshire Hoard: Did You Know?

Home » Videos » The Staffordshire Hoard: Did You Know? 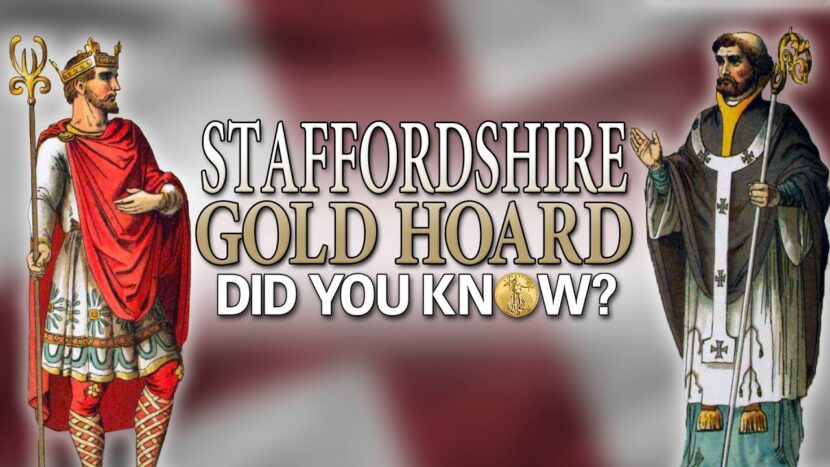 In 2009, a treasure hunter named Terry Hebert stumbled upon an assortment of ancient Anglo-Saxon gold and silver artifacts in Staffordshire, England. After weeks of detailed research by archaeologists, this hoard of artifacts was declared the largest collection of any Anglo-Saxon gold and silver metalwork ever to be found. If you’re interested in learning more, watch this episode of U.S. Money Reserve’s “Did You Know?”

The Staffordshire Hoard: Did You Know? – Video Transcription

On July 5th, 2009, a treasure hunter named Terry Herbert stumbled upon an assortment of golden artifacts on farmer Fred Johnson's land in Staffordshire, England. Treasure hunters continued to investigate over the course of the next few days and unearthed hundreds of gold artifacts buried in the soil. Soon after, archaeologists began to excavate the site, recovering around 3,500 pieces of various artifacts consisting mostly of martial or military items, such as sword hilt fittings, sword pommels, and scabbard pendants. The hoard of gold and silver artifacts is the largest collection of Anglo-Saxon gold and silver metalwork ever to be found. The hoard was likely left behind in the seventh century, in the Anglo-Saxon kingdom of Mercia. On the 25th of November, 2009, the collection was valued to be worth $5.3 million by the Treasure Valuation Committee. The Anglo-Saxons valued gold and silver for more than their material value. These metals were believed to be infused with magical properties that would protect them against misfortune and loss. The reason for why this hoard of items was buried remains a mystery, but archaeologists have a few theories. Anglo-Saxon warriors may have buried these artifacts as an offering to the gods or possibly to hide them from invading armies. The Staffordshire Hoard remains one of the greatest and most significant British archaeological discoveries in human history. Call the number on your screen or click the link below if you'd like to learn more about gold's place in history or gold's place in your portfolio.