Saddle Ridge Hoard: Did You Know? 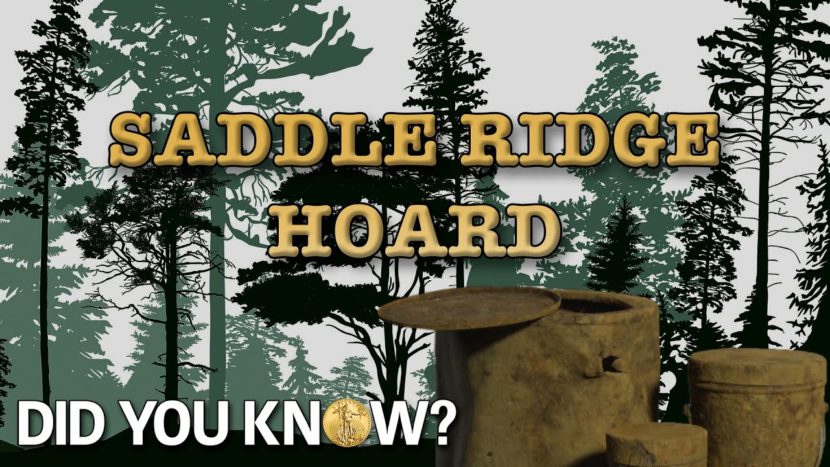 What started with a closer look at a can sticking out of the ground in rural California ended up being a ten-million-dollar treasure known as the Saddle Ridge Hoard. In total, 1,411 coins were found, including a double eagle coin minted in 1866. If you’re interested in learning more, watch today’s episode of U.S. Money Reserve’s “Did You Know?”

Narrator:          (00:06)
Mary and John always thought the trail on their rural California property had some odd features. A rusty can hung from a tree nearby; a uniquely shaped rock that stood atop a hill. The couple named this area of their trail Saddle Ridge. While walking their dog in February of 2013, they noticed an old can jutting from the ground. As the couple carried it home, the lid cracked open, revealing a multitude of gold coins. They realized the hanging can and the rock were most likely markers of the hidden stash. After uncovering the hidden treasure, they took a metal detector to their property and discovered more gold coins, totaling to 1,411 coins. They later referred to this discovery as the Saddle Ridge Horde. John later said of the find, “It was a very surreal moment. I thought any second and old miner with a mule was going to appear.”

Narrator:          (00:59)
The face value of the horde at the time of the discovery was about $28,000 or about $10 million today valued by the Professional Coin Grading Service. The coins were minted in the late 19th century and each hold varying degree of value. One Double Eagle coin minted in 1866 has been valued at around a million dollars. The hoard mainly consists of San Francisco double Eagles, but has unique finds like the Georgian delegate Eagle. The theories over the origins of the horde span from an outlaw building a stash to a wealthy landowner affording his coins due to his distrust of banks. Mary and John kept their identity and location secret, making the discovery of the original owners unlikely. You don’t need to search for old buried cans to get your hands on stunning gold coins. Call the number on your screen if you’d like to learn more about gold’s place in history and gold’s place in your portfolio. Make sure to subscribe to see more of our videos on various topics.