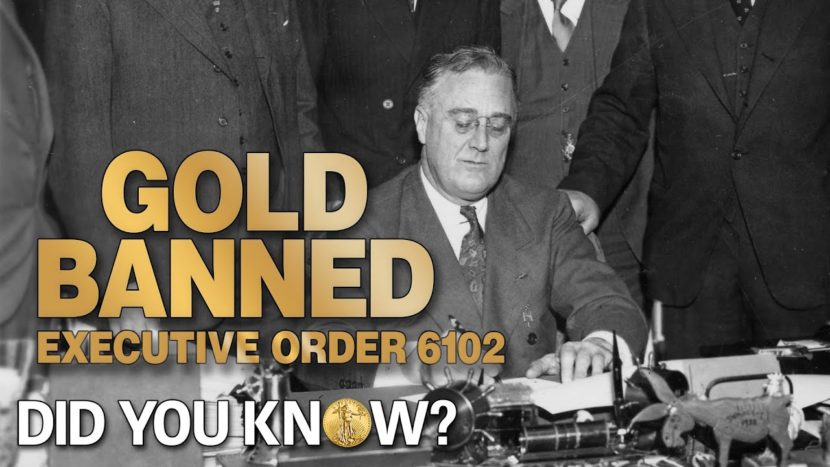 There was a time in history that gold ownership was outlawed for many Americans. In 1933, Executive Order 6102 confiscated gold from citizens. The order was controversial and upset many people, and was finally repealed after decades in 1974.

Executive order 6102 was a presidential executive order that required Americans to surrender much of their gold to the U.S. government. President Franklin D Roosevelt passed the order in 1933 as a reaction to the crippling effect of the Great Depression on the U.S. economy. After years of economic turmoil, the American people desperately required relief from the financial disparity induced by the depression. The reason behind the order was to remove constraints on the Federal Reserve in order to print more money during the depression. The order was issued within a month of FDR’s inauguration, and all Americans were required to forfeit their gold to the government. However, each person in the household could retain up to five Troy ounces of gold bullion coins. Those who surrendered their gold were compensated with $20.67 per Troy ounce, the spot price of gold at the time.

Many were upset by this, as gold’s price increased to $35 per ounce with the passing of the Gold Reserve Act of 1934. This order also led to the extreme rarity of the 1933 double Eagle coin. As production stopped, all 1933 coins were ordered to be destroyed. However, about 20 were stolen before being destroyed. The extreme rarity of these coins led to one selling for over $7.5 million in 2002. The limitation of gold ownership was repealed in 1974 when president Ford signed a bill once again, legalizing private ownership. Call the number on your screen if you’d like to learn more about gold’s place in history and gold’s place in your portfolio.